Published:
During the late 19th and early 20th century, the exchange of artistic ideas between Europe and Japan went both ways. 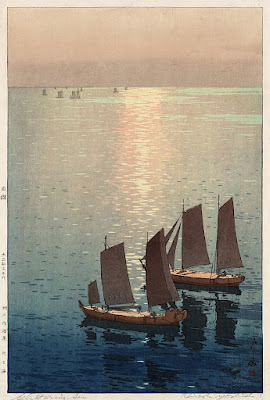 Hikari umi (Glittering Sea), by Hiroshi Yoshida (1926)
Japanese artists who produced the ukiyo-e prints were inspired by the subjects and styles of European impressionism, (which itself used ideas from ukiyo-e). 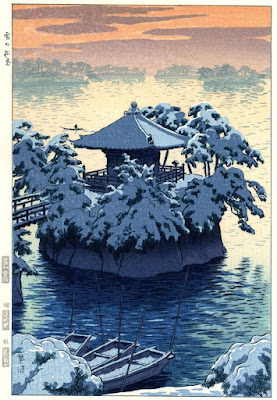 According to the Clark Art Institute, artists in the Shin-Hanga Movement were working in "an intense period of modernization and Westernization, and many shin-hanga artists appealed to consumers by creating works that evoked nostalgia for a premodern Japan."

Bokashi is a Japanese technique for hand-applying a gradient to a moistened printing block.

According to Wikipedia, "The best-known examples of bokashi are in the 19th-century ukiyo-e works of Hokusai and Hiroshige, in which the fading of Prussian blue dyes in skies and water create an illusion of depth." 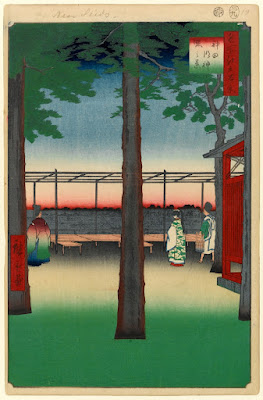 "In this print by Hiroshige, bokashi is used in the foreground, at the horizon, in the sky, on the priest's robes, and in the square cartouche."
Source: gurneyjourney.blogspot.com
1 Comments+ Sharelabels (1)Flag
AllPrintmaking 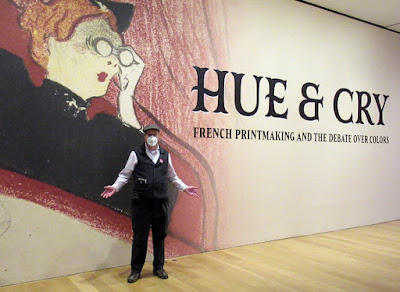 The Clark Art Institute in northwestern Massachusetts is presenting an exhibit of French printmaking called Hue and Cry: French Printmaking and the Debate Over Colors. It examines how color found its way into the world of black and white prints. 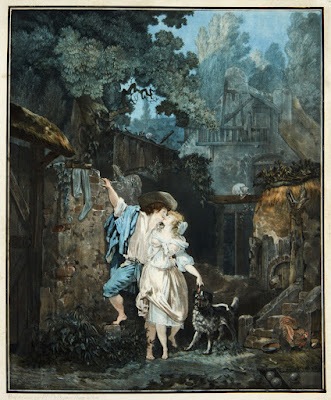 The earliest prints were all black and white, using methods such as woodcut, wood engraving, and etching. When the technology made it possible to print in full color, tastemakers in France dismissed them, arguing that they were cheap and low-class.

The exhibit includes fine examples of these early intaglio color prints, such as the one above. 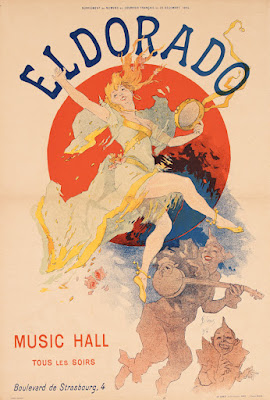 When color lithography was developed, artists embraced it as a fast and efficient method that was perfect for large public posters. The show includes many prints by Jules Chéret, the master of the show poster. 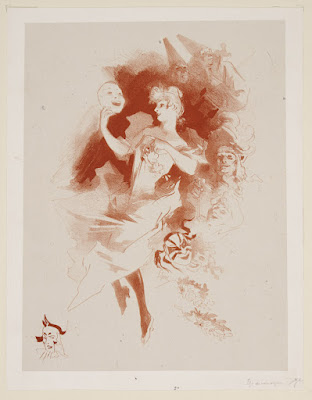 I was also impressed by the informal sanguine prints by Jules Chéret, where he explores different arrangements of carefree figures. 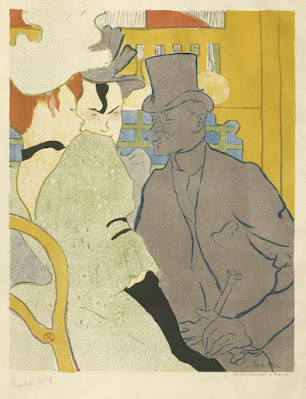 Henri de Toulouse-Lautrec, An Englishman at the Moulin Rouge

I was hoping the show would include printed works by Alphonse Mucha. He was Czech, technically, but he was the major star in the Paris print scene, and his graphic works were extremely influential. Théophile-Alexandre Steinlen and Eugène Grasset were also notably missing from the show, perhaps because the Clark doesn't have good examples of the color prints in their collection.

A secondary exhibit called "Competing Currents" about Japanese prints of the 20th century makes a perfect enhancement to the show. I'll share more about that on a future post.

Hue and Cry: French Printmaking and the Debate Over Colors closes March 6. Admission is free for the month of January.

Published:
S. H. R. Rjjal asks: "Mr. Gurney, what's your take on artistic integrity and commercial art? The original Harry Potter illustrator for instance does not own a single one of her work."
Dear S.H.R,
Commissioned work doesn't have to be commercial. Just because you're paid to draw something doesn't mean you have to cynically crank it out. If you're going to do work on commission, it might as well include your personal inspiration and your highest standards.

The same is true with gallery art, which is potentially more commercial than illustration. There's always a temptation to produce work only because we know it will sell, though we may have drifted away from the authentic original inspiration.

If you do illustration work, you typically get to keep your originals. It's wise to keep at least some of your best examples. If you work hard on them, you'll be proud of them and they might be worth a lot more in the future.

An excerpt of my introduction to the book on Adolph Menzel (German, 1815-1905) addresses this point: As a commercial printer, Menzel threw himself into the task of producing decorative illustration work, such as menus, letterheads, greeting cards, and invitations. Anyone else might have written off such jobs as menial. For Menzel, to produce anything less than a sincere effort would be to “throw one’s cake in the water.” He told admiring students that it was essential to do justice to every assignment, and to accept everything as a genuine artistic challenge. “You will then cease at once to consider anything unworthy of your powers,” he said.
----
Adolph Menzel: Drawings and Paintings

(on Amazon)
Adolph Menzel: Drawings and Paintings (signed from my website)
Source for the Menzel illustration in this post

Published:
Mary Nimmo Moran (1842-1899) traveled all over Europe on sketching trips with her husband Thomas Moran.
But she decided to stay home on one of his extended jaunts to the west. Before he left he coated some copper plates and told her the basics of etching. 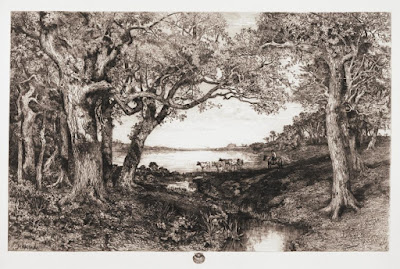 She developed her skill at the art mostly without the influence of teachers, which gave her an original approach. Nearly every plate was drawn in the wild directly on the plate. "When Mr. Moran returned from the West, the result of his wife's initial efforts with the needle were a surprise to him." 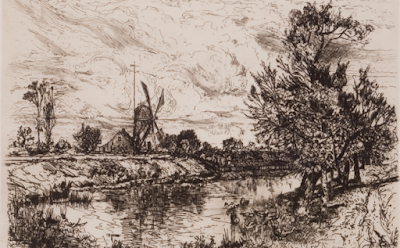 "They were so original, so pronounced in their characteristics, so unlike anything he himself had done or had seen, that he scarcely knew whether to praise or condemn. Four of these first plates, however, were submitted to the New York Etching Club, and were promptly accepted for exhibition." 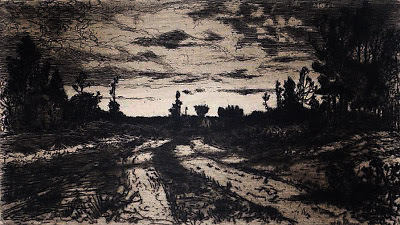 "They were warmly praised by the critics, and the unknown artist was elected a member of the club." 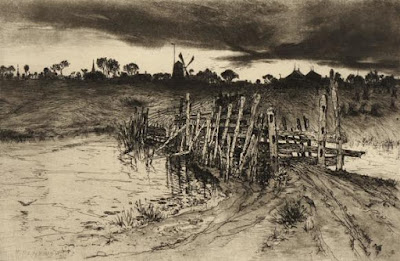 "For twenty years, from her first hazardous beginnings to her death in September, 1899, Mrs. Moran was loyal to her first ideals and true to her own strong individuality."

"Never for a moment did she allow fads or fashion to warp her judgment, or cause her to wander from the path on which she started when she undertook unaided to develop her art."
----
Brush and Pencil Magazine, April, 1901, page 10
Mary Nimmo Moran on Wikipedia
Source: gurneyjourney.blogspot.com
3 Comments+ Sharelabels (2)Flag
AllAcademic PaintersPrintmaking 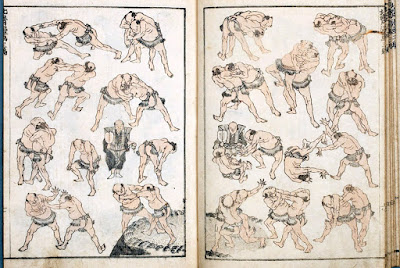 Hokusai's sketches of Sumo wrestlers are full of life and action. They date from the early 19th century and were created as block prints, part of a large collection of informal drawings known as Hokusai Manga.
----
Hokusai Manga on Amazon
Previous post: Magicians from the Hokusai Manga
Katsushika Hokusai (Japanese, 1760 – 1849) on Wikipedia
Hokusai Manga on Wikipedia
Source: gurneyjourney.blogspot.com
1 Comments+ Sharelabels (1)Flag
AllPrintmaking

Book on Zorn's Etchings Arrives in a Month 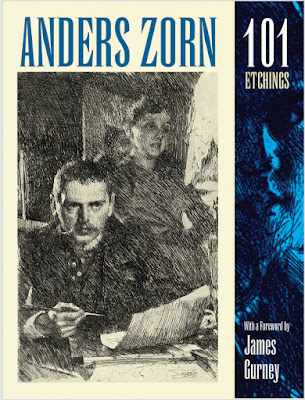 A month from now, Dover Publishing will release a book on the etchings of Anders Zorn (1860-1920), for which I wrote an introductory essay. 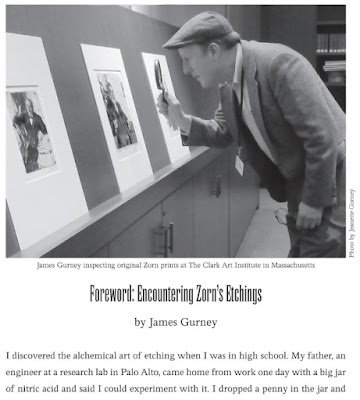 Published:
Norbertine Bresslern-Roth (1891-1978) was an Austrian printmaker who specialized in animal subjects. 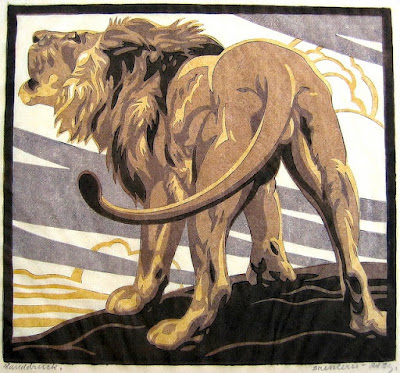 Her preferred medium was the linoleum block print, which suited her strong sense of design. 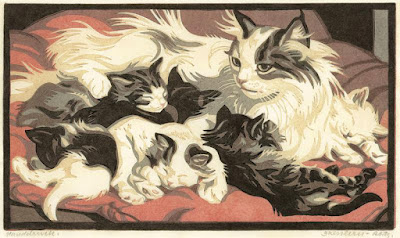 She studied at the animal painting academy of Hans von Hayek, where students painted landscapes and animals on farms near Dachau. 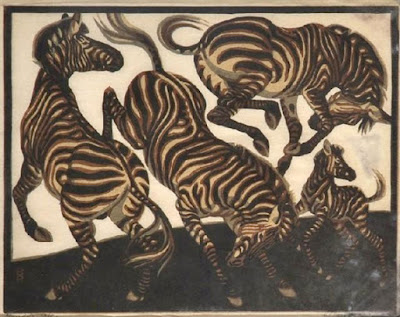 She was inspired by a trip to Africa, and later by trips to the zoo. Most of her African compositions are based on her deep knowledge of animal anatomy, with poses that could never be taken directly from photography. 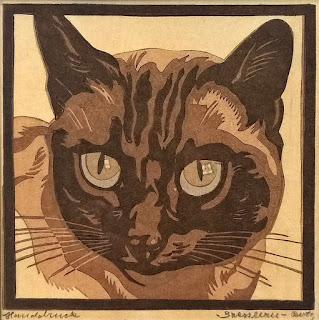 She often used the linoleum reduction process, where the same plate is used several times for progressively darker ink runs. With each color run, more and more of the block is cut away. 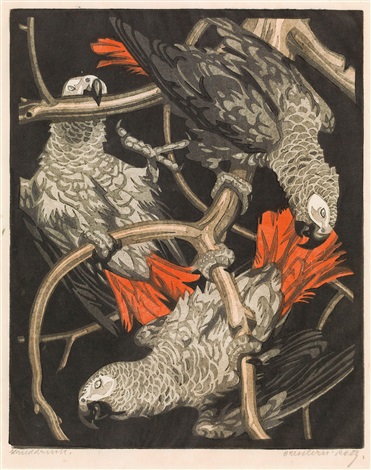 Even for a simple subject, this process requires careful planning, and since you destroy the plate, you can't go back and print more. 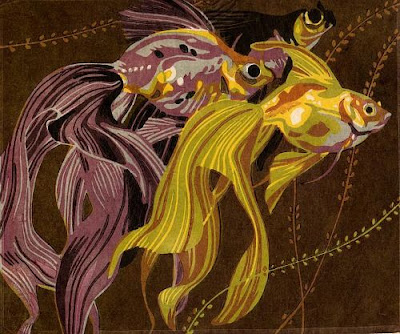 Her birds, fish, and insect subjects, show striking color combinations. Her art is well known to lino-cut artists, but not as well known as it should be to painters and other artists.
-----
Online biography and more samples at "Adventures in the Print Trade"
Wikipedia (in German) Norbertine Bresslern-Roth
Samples of N.B.R. on Artnet
More examples, including paintings and illustrations, on Dorotheum
Reduction process explained by Sherrie York
Source: gurneyjourney.blogspot.com
3 Comments+ Sharelabels (2)Flag
AllAnimalsPrintmaking

Analysis of a Watson Lino Print 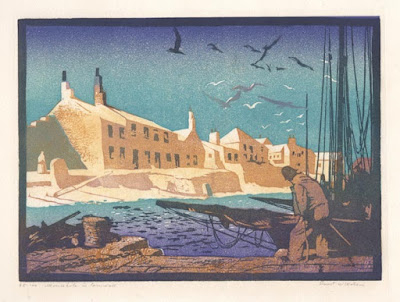 As you look at the image, can you guess how many plates he used, and in what order they were printed?

Answers below (scroll down):

There are four plates. Fortunately, Mr. Watson isolated them for us.

1. He starts with a pale yellow shape under the entire silhouette of the buildings. The yellow was probably not quite as dark as it appears below.

2. A graded blue-green plate goes under the large areas of the sky and water. A few of the birds are cut out to the white of the paper, and he has also cut out some sparkles in the water.

3. A plate for the shadows of the buildings. These shadows overlay the initial pale yellow run. This plate is inked unevenly to give it texture and to make some of the birds darker.

4. Finally, a dark blue-green key plate provides the windows, ropes, wavelets, and details of the figure.

Watson was able to multiply the effect of each of plates 2 and 3 by inking them with more than a single color. He said: "It is quite possible to 'paint' rather freely with the rollers in this manner, producing an infinite variety of gradations of hues."

Forty Illustrators and How They Work

Published:
Oscar Droege was a German artist who worked in the medium of the color woodblock print or Farbholzschnitt. 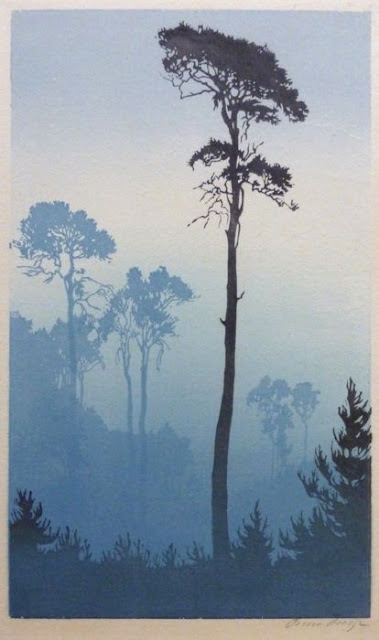 The color woodblock print (sometimes called a "color woodcut") is a printing process where multiple wooden plates are relief-printed. 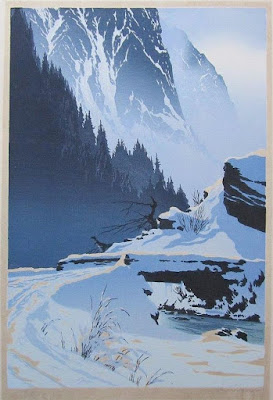 Each plate is inked with a different color, including opaque light colors. Note how one of the plates is lighter and cooler than the paper. Smooth gradations can be achieved while inking the plate. Note how the far mountains are lost in mysterious atmospherics. 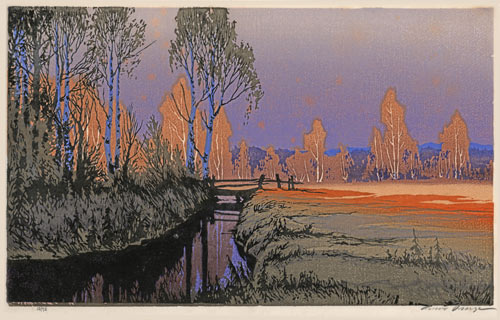 Sometimes many plates are needed. The detailed dark lines are printed last. The effect can be lyrical and poetic, while at the same time it carries strong poster-like impact. 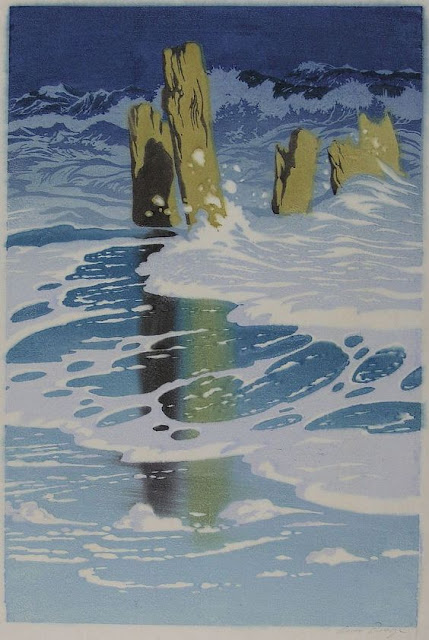 The reflections of those two pilings are inked in the plate. The white foam on the water has a second plate for the slightly darker value. 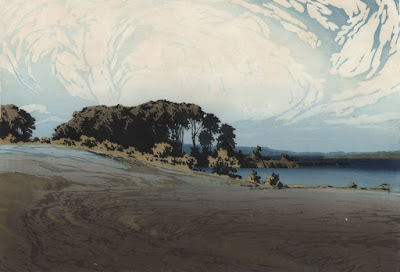 Droege was born in 1898, serving in both World Wars. He was kept prisoner by the Soviets. During peacetime he traveled with a friend through Germany, France and Scandinavia on bicycles and paddle boats in search of subjects for his art. He died in 1983. 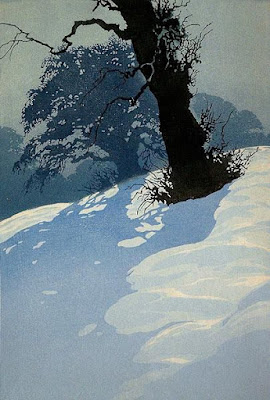