Published:
Is it still art if no one can see it?

That’s one of the philosophical questions posed by the Underbelly Project, where graffiti artists collaborated to decorate an inaccessible subway platform hidden beneath New York City. 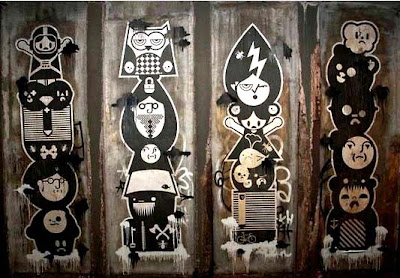 Getting there involved crossing over hot third rails and risking arrest. The organizers have kept the location a secret. After the artists finished their work, they closed it off again, and at the moment no one from the general public can get back down there.

Luckily the artists took some photos, so we can see the art from the comfort of our computers. 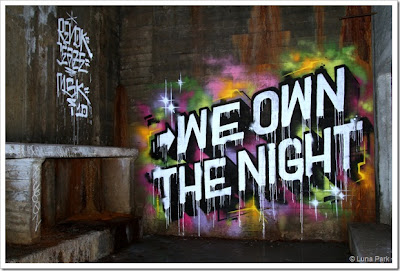 The notion of inaccessible art isn’t new. Many of the painted caves of Lascaux and Altamira were never easy to get to. Some of the Taino carvings I’ve seen in caves in Puerto Rico involve an underground traverse over a mile and swimming across underground lakes. And many ancient cultures with a belief in the eyes of spirits have created elaborate painted tombs, sealed off to the living.
---------
Previously: Camuy Cave Exploration.
Read and see more about the Underbelly Project at the following links:
Second Avenue Sagas
Street Spot Blog
New York Times
Thanks, Frank.
Source: gurneyjourney.blogspot.com
9 Comments+ Sharelabels (1)Flag
AllRabbit Trails 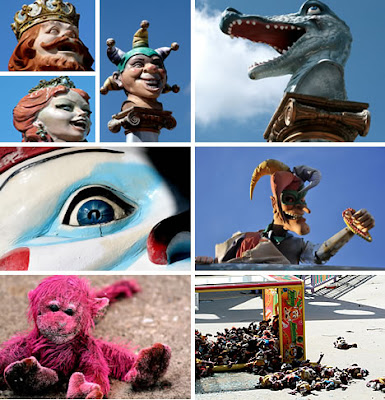 Published:
Philosopher Denis Dutton shares his theory of beauty in this 15 minute TED lecture, illustrated with the white-board animation of Andrew Park.
Dutton dismisses the notion that beauty is in the eye of the beholder or is somehow connected to ideal form. Instead he takes a Darwinian approach, arguing that our response to beauty is wired into our human existence and our need to find mates. 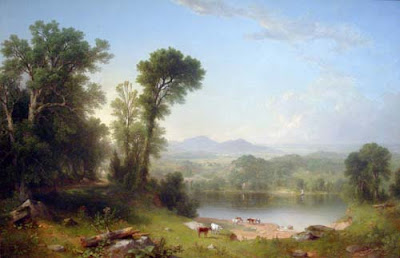 He describes the ideal pictorial landscape as containing an open vista, with an element of water, a forked tree, and a sampling of wildlife, and a path or a road leading into the distance.
Above: Asher Durand.

This landscape, Dutton argues, is universally appealing across cultures because it appealed to our Pleistocene hunter-gatherer ancestors, presumably scanning for game to feed their mates. 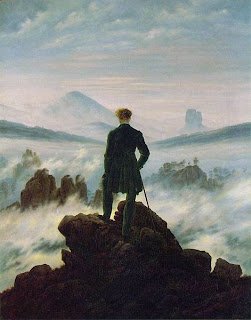 Although I was impressed with Park’s animation, I didn’t find Dutton’s aesthetic theory particularly convincing, nor useful from an artist’s perspective. Part of the problem is semantic. As he says, we are impressed by skilled action, and we call it beautiful. It attracts the girls. Or vice versa.

But what skilled actions are we talking about? Do we include backing a trailer or skateboarding or card-shuffling? What about soccer? These things might be described as “beautiful” only in the loosest sense of the term. Most people wouldn’t include all of them in a definition of art.

And art does not include only skilled action. Many people regard as art certain objects that consciously exhibit a lack of skill: fauve, neo-primitive, and such.

Dutton doesn’t dig very deeply into the nature and the range of the core aesthetic responses, and why those responses might be evolutionarily adaptive. He makes rather unsupportable claims about how he thinks Homo Erectus responded to hand axes. How does he know the axes were art objects? Maybe they were used as money, not art. And how does he know Homo Erectus didn’t have language?

Dutton’s theory also proposes that natural selection provides for a repulsion reaction to such dangerous things as standing at the edge a cliff. How, then, would Dutton’s theory account for the experience of the sublime, as formulated by aesthetic philosophers such as Edmund Burke? According to Burke, we’re attracted, rather than repulsed, by unsettling and disquieting experiences. (Example above: Wanderer by Caspar David Friedrich.)

Far more convincing—and useful— is Tolstoy’s notion that art is the deliberate transmission of emotion. It applies to dance, theater, painting, music, and all other forms. And it is immensely practical to the working artist, because it provides a clear test for the aesthetic value of a particular work. Tolstoy’s theory is a rich topic, perhaps fodder for a future post.
-----
Dutton’s TED lecture on YouTube
Burke’s theory of the sublime
Tolstoy’s essay: “What is Art?”
Related GurneyJourney post: Neuroaesthetics
Source: gurneyjourney.blogspot.com
69 Comments+ Sharelabels (1)Flag
AllRabbit Trails 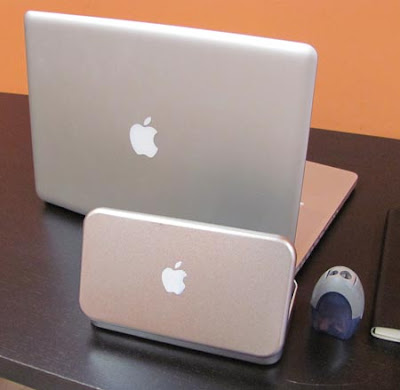 Look what someone accidentally left in a laundromat in Italy—a working prototype of Apple’s much-rumored new iBox, ahead of the official launch.

It’s a lot smaller than the MacBook Pro, and even a bit narrower than the iPad. The design of the outside is very simple, with no connection ports at all. It keeps to the same simple brushed aluminum look with rounded corners. It’s a bold step into the wireless, portable, creative suite market. 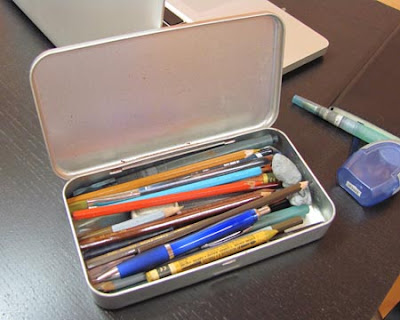 When you open up the hinged upper lid, the iBox interior is filled with 29 different graphic art tools, each of which responds to a variety of hand movements. The interfaces are fairly intuitive, with a variety of mark-making potential.

Problems: The hue range is limited. The receptive surfaces will be sold separately by third party vendors. And the the gray undo tool isn’t compatible with all the rendering devices.
Source: gurneyjourney.blogspot.com
37 Comments+ Sharelabels (1)Flag
AllRabbit Trails

I think it’s really cool that the Jeep car company chose a Greek Ionic capital as the symbol printed on their spare tire cover.

It lends an air of dignity and refinement to the brand. I can’t help but think of Plato and Aristotle bouncing along in an off-road chariot.

Published:
OK, I admit it, I was pretty stupid. I shouldn’t have been sipping tea near my MacBook laptop. It was even more foolish to spill half a cup of Irish Breakfast into the keyboard. 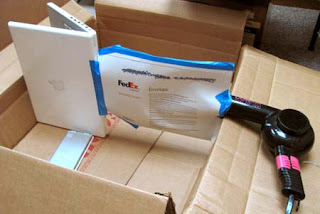 The tea sank down into the cracks. I turned it upside down and let some of it drip out. Then I tried drying it out with a hair dryer. I shot hot air through a FedEx envelope to force hot air into the vents. 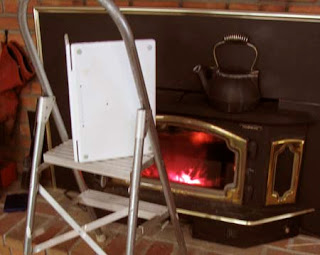 Then I stood it up in front of the fireplace—never mind that it was 80 degrees outside. After a day of drying it out, I powered it up. The screen flickered a few times and then lit up.

The good news is that the moisture apparently didn’t get into the logic circuits. No files have been lost.

I’ve ordered a new MacBook Pro. My makeshift solution with the old one is to put an old G3 keyboard right over the laptop keyboard, and I’m more or less back in business.

Published:
At the New York Science Center yesterday we visited the first annual MakerFaire, a celebration of the Do-It-Yourself movement. 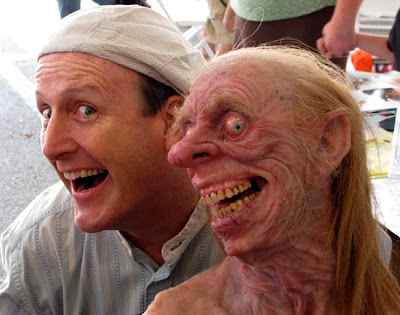 At the Smooth-On sculpture products booth, I checked out a character made from “Dragon-Skin” silicon by Lone Wolf Effects. 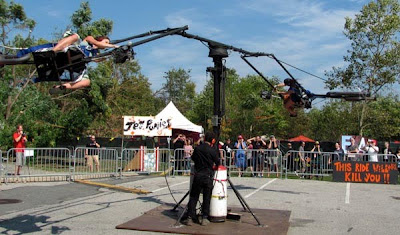 If you sign the legal waiver, you can strap in and ride the Jet Ponies or Thundersteeds, a pulse-jet powered carousel. There was also a big-wheeled chariot and a motorcycle using the deafening fire-spitting jet technology. 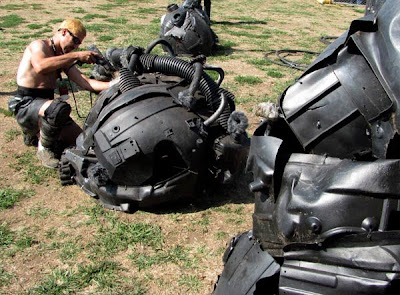 There were bicycles dressed up as fish, as well as innovative recumbents and tricycles. One maker constructed giant beetle-like creatures using old inner tubes and used truck parts.

For the computer geeks, there were radio control robots, 3D printers, and tutorials on soldering simple circuits.

A range of traditional hand skills and child crafts were well represented. People of all ages were invited to learn knitting and crocheting with expert help. We saw a full size car covered in green fuzzy knitting.

The coalition of the handmade world embraces a wide range of people, from steampunk guys with hand-wound pocket watches, to goth princesses in gold spandex bikinis, to families led along by their awestruck grade schoolers.

A few large corporate players had a presence, such as Ford Motors, showing off its brand new 25 mpg Taurus Assault Vehicle. Martha Stewart’s organization had a slick living room set decorated with fake bones that you could make out of paper maché for Halloween.

At the close of the day, Make magazine editor and BoingBoing founder Mark Frauenfelder gave an illustrated talk on his personal odyssey to raise chickens and vegetables, carve wooden spoons, and build guitars out of cigar boxes, an experience he chronicles in his book “Made By Hand.”

It’s a striking irony that the faire takes place at the epicenter of both the 1939 and the 1964 World’s Fairs. You can look up from the tents and booths to the tawdry hulks of yesterday’s fading vision of the future, a vision that included a prosperous industrial America with gleaming flying cars and moving sidewalks. If Maker Faire is a glimpse of the future, it will be more like a computerized medieval marketplace.

Published:
I’ve been practicing art without a license—until now. 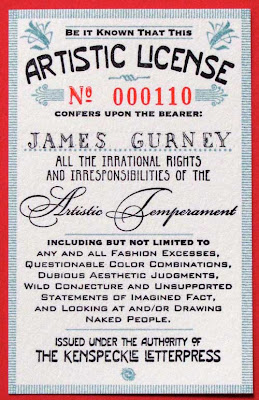 This Artistic License was made by Rick Allen of Duluth, a master wood engraver and hand printer. Each license has a unique number and makes three passes through the press, one for each color. 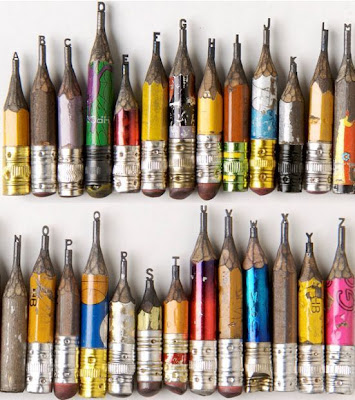 Artist Dalton Ghetti has done some amazingly detailed sculptures from the tips of pencil points.

Published:
Vancouver is trying out the idea of using optical illusions instead of speed bumps to slow down traffic.


Good idea or bad idea? The commentator says: “It’s just kind of flattened out! Almost like it’s painted on the roadway! Wow!”