To See, Your Eyes Must Move

Published:
In order to see anything, your eyes must move around.
In a classic scientific study back in 1976, John K. Stevens anesthetized test subjects but kept them awake. As they sat awake with their eyes open, but unable to move them, subjects found that the images quickly faded.
Because they were unable to move their eyes across the visual field,  they couldn't re-stimulate the retina. Without constantly changing levels of stimulation, the neurons ceased delivering signals.
The test subjects felt a strong impulse to move their eyes, and wanted to move them. It felt to them that moving their eyes would take a huge effort, and they just couldn't do it.
Another surprising result of the study was the sensation that the visual field was displaced in the direction of the anticipated jumping eye movement (or saccade) that they intended to make.
As author Brian Dilg put it, "They were catching their own brains trying to make sense of an image that did not shift as it normally would when the eyes move."
What generates the impulse for a saccade? Vision specialist Dr. Martin Rolfs says, "When you analyze how many of our saccades are triggered by external events, you'd probably end up with very little. A part of the scene that has high contrast will probably capture your eye movements. But as soon as you have the second or third saccade, the influence of this basic visual information in the scene will become less important. Your own interests and your own task that you have at the moment will be much more influential."

This confirms an important insight for picture-makers. The observer's eye pathway does not follow passively through the composition like a ball on a track.

It is driven by the viewer's own conscious and unconscious curiosity, and the artist's job is to awaken that active participation of the viewer.
----
Scientific paper: PARALYSIS OF THE AWAKE HUMAN:VISUAL PERCEPTIONS
More in the book "Why You Like This Photo" by Brian Dilg.  It's a gem of a book, designed for photographers, but full of insights about visual perception that artists can also benefit from.
Source: gurneyjourney.blogspot.com
3 Comments+ Sharelabels (1)Flag
AllVisual Perception

Published:
In this optical illusion by Victoria Skye, the blue stripes seem to slope up and down, but they're actually level and parallel. 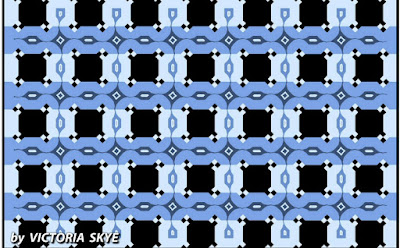 On close examination, the little diamond shapes in the top blue stripe tilt a little to the left. They tilt to the right on the second and fourth stripe. Those tilting diamonds seem to influence our perception of the slope of each blue stripe.

Is an Innocent Eye Possible?

Published:
In his defense of Turner, critic John Ruskin wrote that "the whole technical power of painting depends on our recovery of what may be called the innocence of the eye; that is to say, of a sort of childish perception of these flat stains of colour, merely as such, without consciousness of what they signify, — as a blind man would see them if suddenly gifted with sight.” 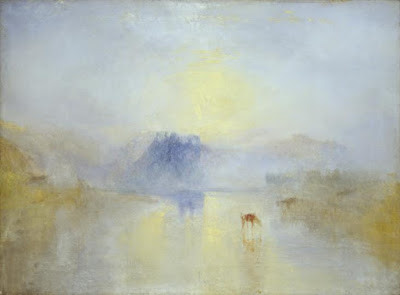 Joseph Mallord William Turner, Norham Castle, Sunrise, c.1845, Tate
Is such an "innocent eye" really a state of vision that we can recover? Nobel Prize winner Eric R. Kandel, in his book The Age of Insight, explains that the 'innocent eye' is not possible: "All visual perception is based on classifying concepts and interpreting visual information. One cannot perceive that which one cannot classify."

Visual perception scientist Leon Lou says: "The innocent eye, or seeing ‘what the eye sees’ is a meaningful expression many artists use to capture their experience in observational drawing and painting. However, a literal interpretation of the innocent eye does not comport with a science of vision focused on object perception. Nor is a two-step model involving a ‘bottom-up strategy’ a plausible account of the notion."
----
Read more:
Leon Lou: "Artists’ Innocent Eye as Extended Proximal Mode of Vision"
Book: The Age of Insight: The Quest to Understand the Unconscious in Art, Mind, and Brain, from Vienna 1900 to the Present

Gombrich's 1960 book Art and Illusion: A Study in the Psychology of Pictorial Representation (Bollingen)

Published:
The "dual axis illusion" appears to turn on a horizontal axis, and then a vertical one, spinning in one direction and then another. (Link to YouTube).
----
Via BoingBoing
Source: gurneyjourney.blogspot.com
3 Comments+ Sharelabels (1)Flag
AllVisual Perception

This optical illusion from How Equipment Works demonstrates how breathing seems to be tied in with visual perception.
Source: gurneyjourney.blogspot.com
6 Comments+ Sharelabels (1)Flag
AllVisual Perception

Published:
Eyetracking heatmaps appear as red and yellow blobs where viewers spend the most time looking.
According to Dan Hill, "If there's a face involved, as much as seventy percent or more of all the gaze activity goes to the face(s) present."
Hill notes that in the painting American Gothic by Grant Wood, even the pitchfork and the man's hand don't compete with the faces. 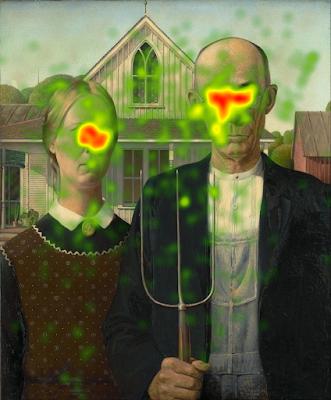 We use faces to form our impression of people, Hill says. "We're always looking for clues about their social status, their mood and overall personality."
Images from the book "First Blush: People's Intuitive Reactions to Famous Art" by Dan Hill 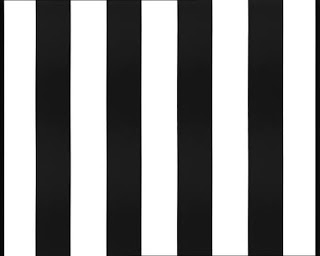 Our visual systems are equipped with special cells in the visual cortex whose job is to detect vertically aligned edges, bars, and lines.

Our relative deficiency at judging diagonal angles compared to verticals and horizontals is known as the oblique effect. According to Wikipedia, "People are very good at detecting whether a picture is hung vertically, but are two- to fourfold worse for a 45-degree oblique contour, even when a comparison is available."

Another remarkable fact is that the relative number of these cells depends on the visual environment that we grow up in. People raised in forests have more vertical cells than people raised on the plains.
-----
Quotes from Cognitive Psychology For Dummies

, Dan Hill examines how we look at artwork, using an experimental approach that combines eye tracking with facial coding.

Facial coding involves the careful tracking of minute facial expressions that animate the face of a viewer while reacting to a stimulus. As we process images through our brains, the information passes through an emotional filter before we can rationalize what we're seeing.

Hill uses a market-research approach to analyzing our response to art. In a controlled experimental setting, he invites viewers to respond to a variety of famous paintings and photographs. The book is an informally written summary of his experimental results.

He makes some observations that should interest curators and us museum-goers. First, viewers have short attention spans. The best chance to hook someone's attention is in the first three seconds. After that there's a dramatic fall-off that never really bounces back.

Hill says: "an art work's window of opportunity for creating an emotional connection is typically super brief." After spending many hours in many different museums carefully watching how people interact with the art on the walls, he concludes that the average viewing time per painting in an art museum is about 10 seconds: "Most often, you're likely to look at an artwork for four seconds before taking five seconds to read the plaque (i.e., "tombstone") describing the work's title, the artist's name, and so forth. Then if still interested, you'll glance back at the artwork for another second, before moving on. The vast majority of museum viewers, he observes, read at most twenty words of the museum caption before their attention falters.
---
On Amazon: First Blush: People's Intuitive Reactions to Famous Art

Published:
How is it that we perceive the world in such rich detail and texture, even though the eyes don't actually take in very much information?

Neuroscientists working with mathematicians at NYU have developed a mathematical model of vision which explains the process that the brain uses to generate elaborate visual representations.

This process is necessary because to achieve our detailed vision, we don't use our eyeballs in the same way that a camera uses its lenses and sensors. For one thing, there are relatively few neurons carrying information from the retina to the back of the brain.

The magic happens in the visual cortex, which is much better connected neurally. As the brain begins to sort out the relatively meager information it receives, it elaborates the data into a richer representation. Until recently, scientists thought this process happened in a "feed forward" direction, a one-way trip from retina to visual cortex to higher vision centers in the brain.


But it turns out that information often loops back from higher to lower levels of processing, amplifying weak signals into richer images. This happens in real time, largely unconsciously, and sometimes inaccurately, such as when you think you see a snake, but it turns out to be a rope.

At this stage, the researchers are concentrating on the brain's preliminary decoding of the image—tasks such as edge detection and shape recognition, but they're working their way to understanding other levels of processing, such as perception of motion and color "which occurs through an entirely different and more difficult neural pathway."

As a plein-air painter, these findings make sense to me. When I'm looking at a scene in order to paint it, I'm conscious of the impression of infinite detail, much of it suggested to me by my peripheral vision.

I'm also aware of how my visual system also screens out elements of a scene such as a pole or a foreground object,  even from a scene that I may have been looking at for over an hour. There are objects in my visual field that I'm not aware of at all until someone points them out to me or I look at a photo of the scene.

Published:
An ambigram is a word or logo which reads the same when inverted.

Remarkably, the word itself can be made into an ambigram. 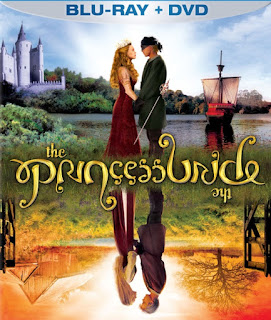 The cover to the DVD version of "Princess Bride" is also an ambigram.

John Langdon designed this one, which reads "Philosophy Art & Science" right side up or upside down.
Wikipedia about Ambigram
There's a nice collection online in "An Optical Illusion"
Source: gurneyjourney.blogspot.com
4 Comments+ Sharelabels (2)Flag
AllLetteringVisual Perception