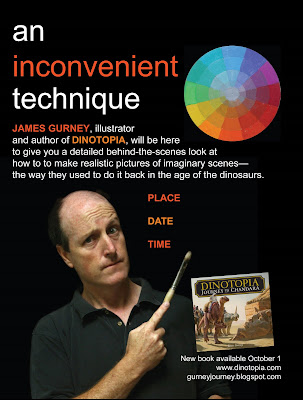 In addition to the usual bookstore signings, I’ll be visiting eight of the top art schools in the U.S.A. during the upcoming book tour for Dinotopia: Journey to Chandara.

At each school, I’ll meet with students and faculty to find out about their various programs for teaching painting, illustration, and comic art. At each one I’ll give a presentation showing my own method for making realistic pictures of imaginary scenes. The name of the presentation is “An Inconvenient Technique.”

Unfortunately, most of these events can’t be open to the public. But don’t worry: over the next couple of weeks on this blog I’ll preview some of the material from my presentation. If you’re a working artist, perhaps you might find a few tips that you can use, and I hope you’ll add a comment describing methods you’ve developed.

And if you stay tuned to this blog, you’ll get an inside look at each of these famous art schools. If you’re a young artist thinking of going to art school, you’ll get an idea of what the institutions have in common—and how they’re different.

If you’re not an artist at all, but just enjoy the Dinotopia books, you’ll get a better idea of what the cooks are doing in the kitchen.
Source: gurneyjourney.blogspot.com
2 Comments+ Sharelabels (2)Flag
AllArt Schoolsroad tour 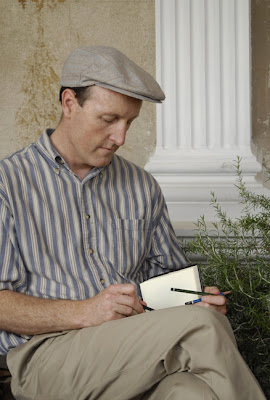 I should explain about what I hope to accomplish this blog. It’s called Gurney Journey because it will be a simple record of people and places that my wife Jeanette and I encounter on the road tour for the new Dinotopia book. The new book officially launches October 1.

I’m trying to do the same thing Arthur Denison did on his travels and record what he saw, heard, and thought during his journey. I want to use this blog to let you follow the ups and downs as we travel around to meet Dinotopia readers.

I’ll include pages from my sketchbook whenever possible, along with a few photos to take you behind the scenes.
Source: gurneyjourney.blogspot.com
1 Comments+ Sharelabels (2)Flag
AllJourney to Chandararoad tour

Published:
June 2007—Book Expo
The Jacob Javits Center in New York is the scene where over 50,000 new fall titles are introduced to booksellers. Dinotopia: Journey to Chandara was just one of them. I signed free posters for everyone who visited the Andrews McMeel booth, and I even had an audience with the Pope—OK, well, at least a cardboard replica of him. 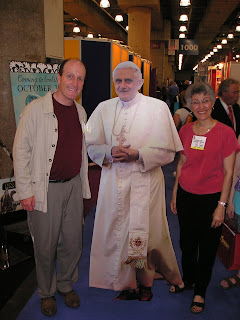 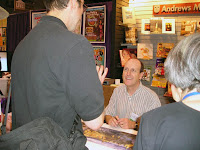 ALA Convention
At the American Library Association convention in Washington, I signed posters for librarians from elementary, middle and high schools, and from small towns and big cities, and even one librarian who was going to four countries in Africa to build up the libraries there.


Puerto Rico, July 2007
To celebrate my son Franklin’s graduation from high school, Jeanette and I took him on a trip to Puerto Rico, where he learned to snorkel. While we were there, we met up with Tamith and Aravis, two people from the Dinotopia Forum. They took us to visit the rain forest at El Junque, which looked quite a bit like the Rainy Basin.

Then we convoyed with Tamith and Aravis to the other corner of the island, where Tamith’s family has a houseboat. Her mom is a terrific cook, and made a delicious dinner of Puerto Rican cuisine, or as they call it, “comida criolla.”

Puerto Rico is sketchers’ heaven! I tried to catch my fellow breakfasters unawares by sketching in my trusty pencil sketchbook… 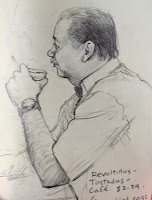 ...or painting watercolor street scenes in the sweltering heat of Ponce or the cool nights of San Juan.

Most often sketching draws a crowd of curious onlookers. 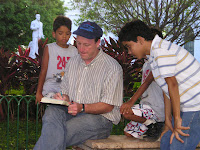