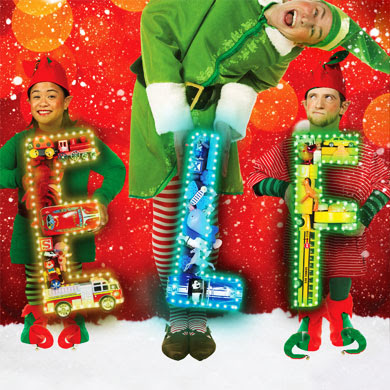 Last night I went and saw Elf the Musical with two of my college girlfriends.  All three of us are HUGE fans of the movie, and were quoting all of Will Ferrell's hilarious one liners non stop throughout happy hour up until the moment the curtain opened.
Now, we all know Will Ferrell's character Buddy makes Elf the movie.  His child-like awe, enthusiasm, and ridiculous behavior is the best part.  So... we weren't sure how that would translate to theater, with a different character playing the lead, Buddy the Elf.  Plus, the addition of song and dance numbers, something that isn't really present in the movie.
The verdict: the play was hilarious!!!  The play followed the same storyline as the movie, with entertaining and jazzy song and dance numbers peppered throughout.  There was a particularly funny Santa number with a slough of drunk Santas marooning at a bar - amazing!  And Buddy the stage version - hilarious!  So funny!  My friends and I were laughing out loud, and talking about the play all the way home (always a good sign in my opinion).
It's only playing in Seattle or NYC, if you live close by, I highly recommend it!
Source: lovely-little-things.blogspot.com
+ Sharelabels (3)Flag
AllChristmas timeSeattle companyfriends