Published:
Tankers !!!  Bunker mates !!!
While I'm on vacation with my family (and away from my workbench ...) I'll post some old interesting cases... They are kits and models that I already built for some time, but unprecedented here at Bunker. So, let's go...
Today I'll show a very unusual vehicle design that would function as a ram: the Raumpanzer "Tiger" (P)- Rammtiger. This project was very tasty (and economic) to be built ... 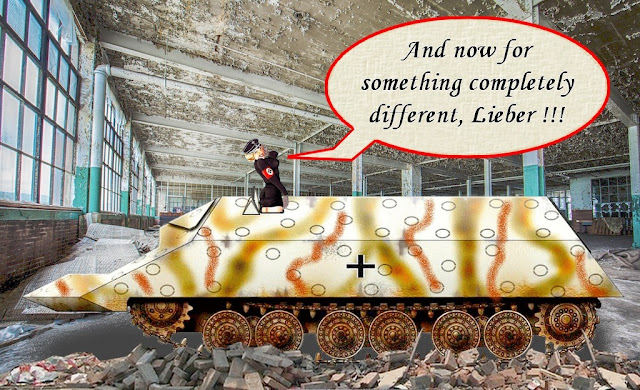 History:
Based on the experiences of Stalingrad street fighting, the German Army HQ decided to builit a short series of barricade and obstacle destroyer tanks based on VK 4501(P) chassis.
Führer personally on 5 January 1943 ordered preparing three Raumpanzer "Tiger"(P) vehicles for action on Eastern Front.

This lightly armed (with ball-mounted MG 34 in the hull front, derivation from Elefant) vehicle was to be a standard VK4501(P)’s hull mounted with streamlined upper superstructure and front mounted plow (ploughshare).

The shape of the armor also allowed for rubble to easily slide off the vehicle so that it could drive out from under a destroyed barricade or collapsed building. The armour was 50mm on the upper surfaces and 30mm thick on the frontal glacis plate, the sides and rear. Access could be achieved by the primary rear hatch, supplemented with an auxiliary upper access hatch.
In May of 1943, three superstructures were completed and three Raumpanzers were ready in August of 1943. Their fate is unknown after August of 1943, but it is unlikely that they saw any combat and probably remained at Nibelungenwerke. Unfortunately, no photographic evidence survived the period ...
For some time circulated in the Web this photo below, showing a parked Raumpanzer between T-34s, after capture. But the Raumpanzer this photo is totally fake.
Other sources state that only 1:15 scale model was made when the entire concept was rejected and three chassis were used as previously planned. 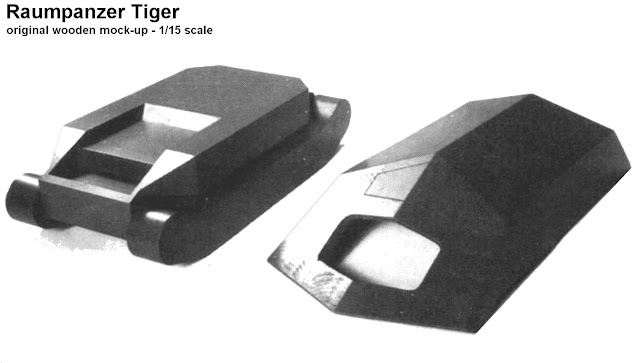 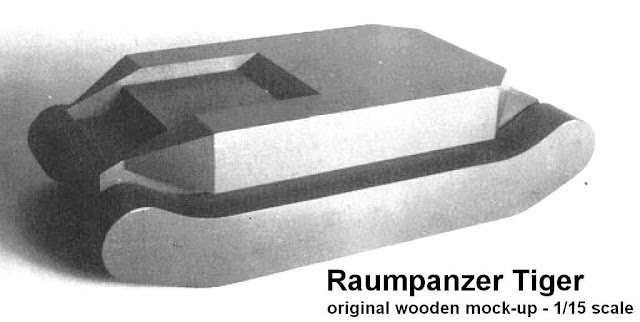 It is thought that the vehicle was to be operated by a basic crew of a driver and the MG operator. An interesting fact is that the concept of barricade and obstacle destroyer tanks were used later (when the German cities were being devastated by air bombing) as obstacle-clearing specialized tanks, the Ramschaufelpanzers.
I built the Panther Ausf D version:
...and the Stug IV version dozer blade ( I'm building one of these little beauties, soon): 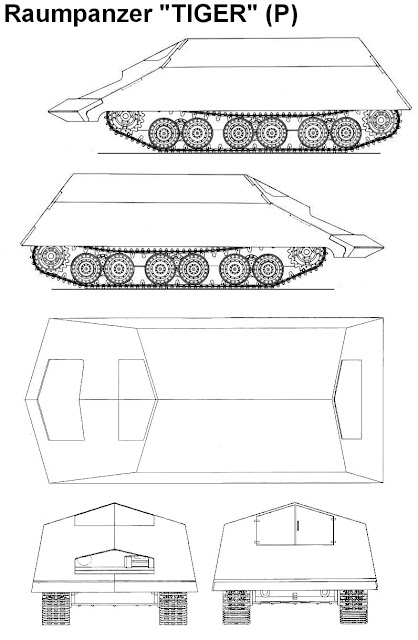 The kits:
Well...For these crazier than usual projects I have a rule: be the most economical possible. Love use scrap and spare parts...and tons of light scratch. Just for fun!!!
For the chassi, I used an old Italeri, scrapped:
For superestructure, I used the Rammtiger VK4501 Conversion for Italeri Elefant - Airmodel - #AM-553. Vacu (and cheap) stuff...
Like any vacuumformed kit, the first thing is demarcate the limits of the cuts ... 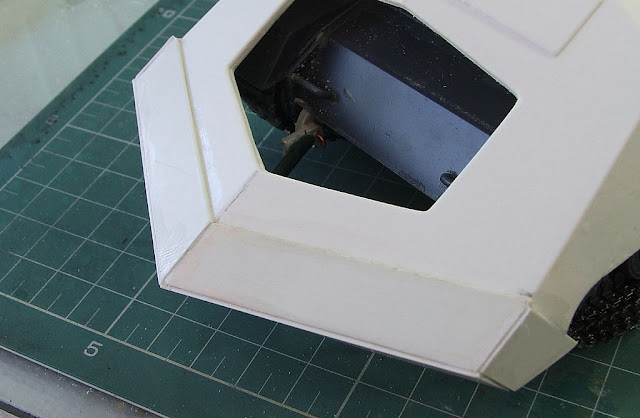 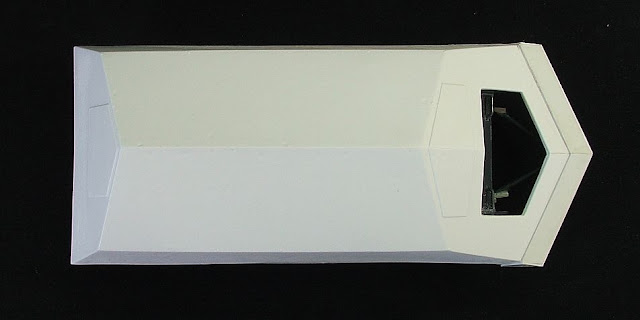 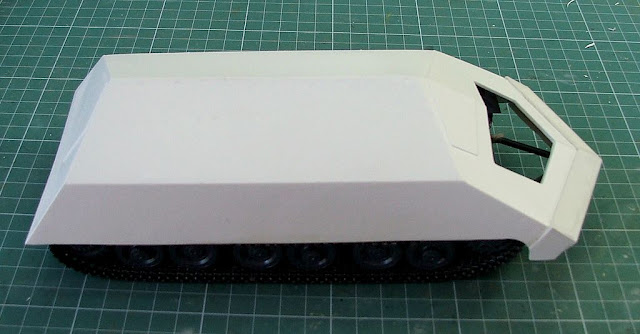 As the vehicle is a paper-panzer, I decided to have a little freedom of expression: a top access hatch would be very welcome. And a shield (or deflector) for the debris that the vehicle would move, protecting the upper hatch (from Tiger I )... 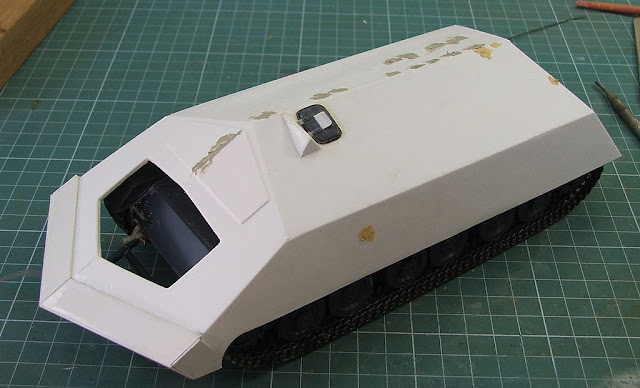 A detail: I think a reinforcement in the front portion of the superstructure would be a logical solution engineering. And I did.
Well, primmer time...the color and texture of the primer help detect flaws .... 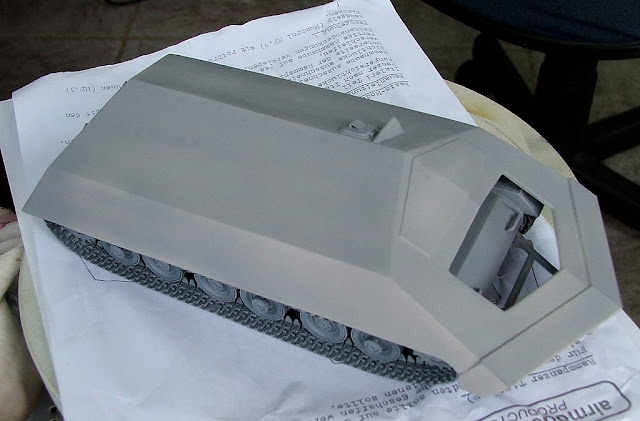 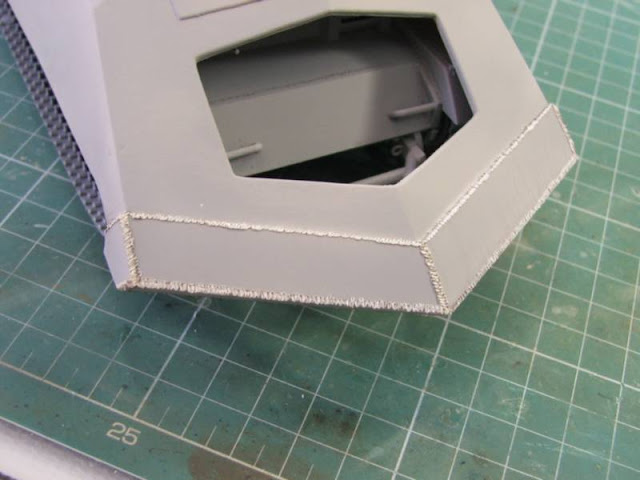 A profile as a template for markings and colors: 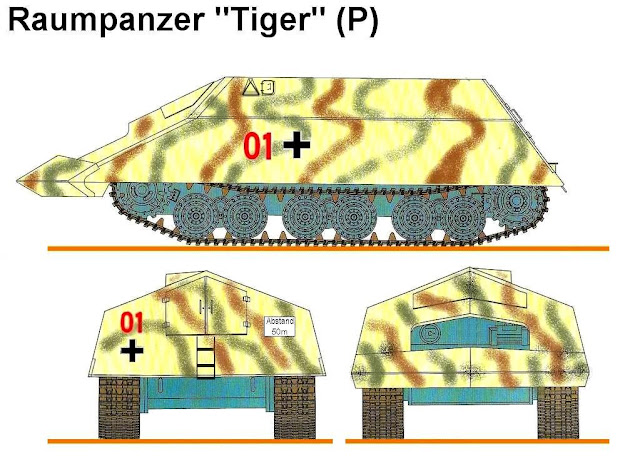 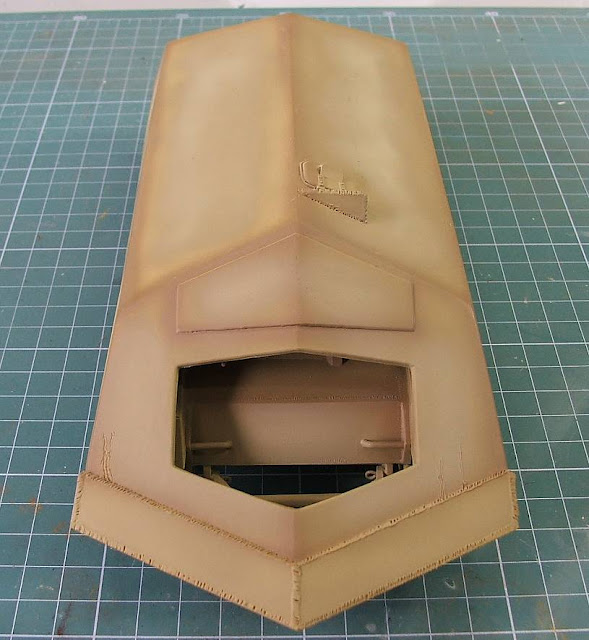 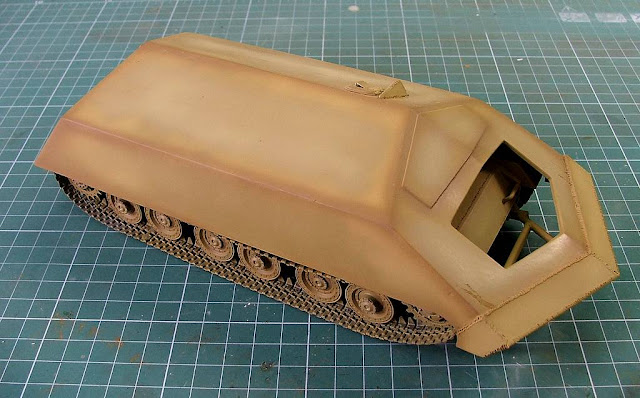 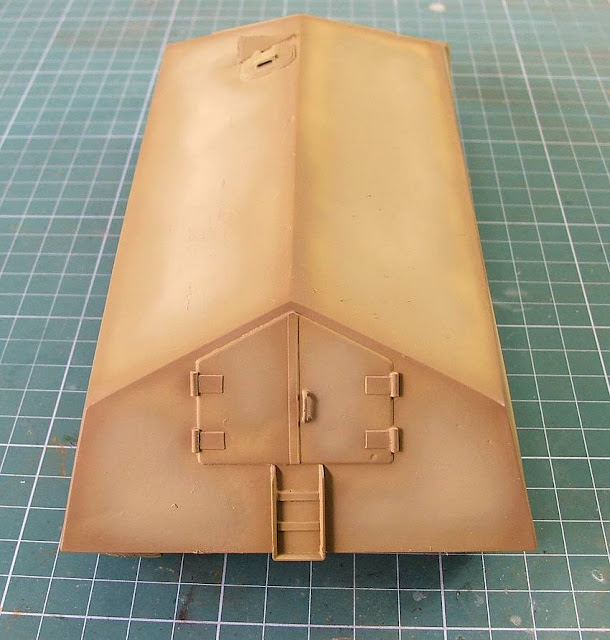 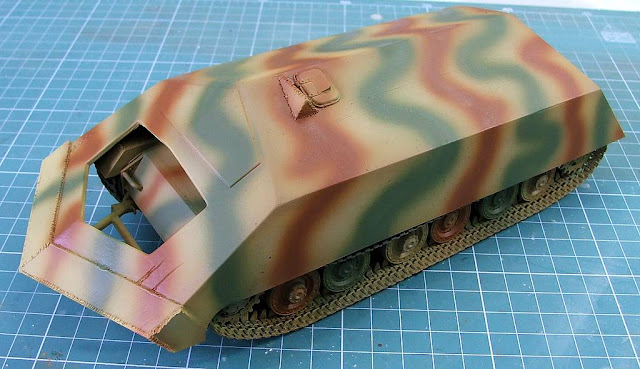 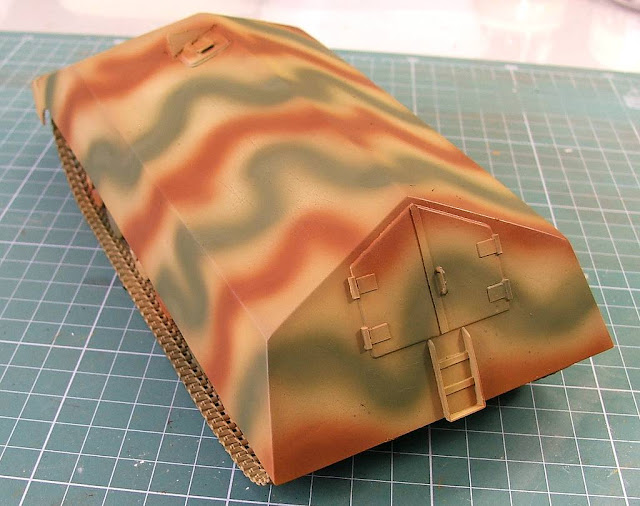 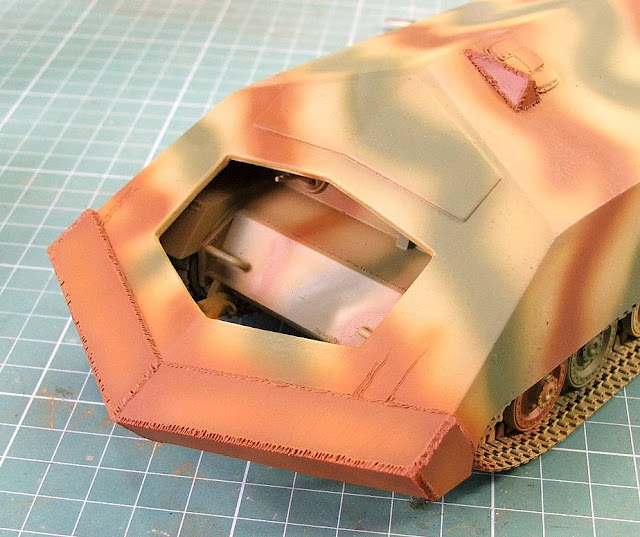 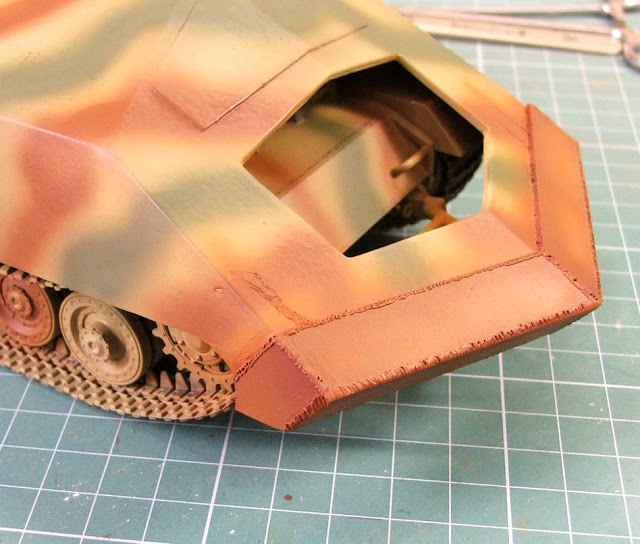 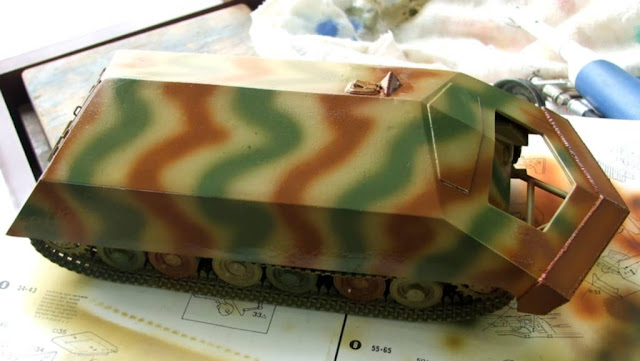 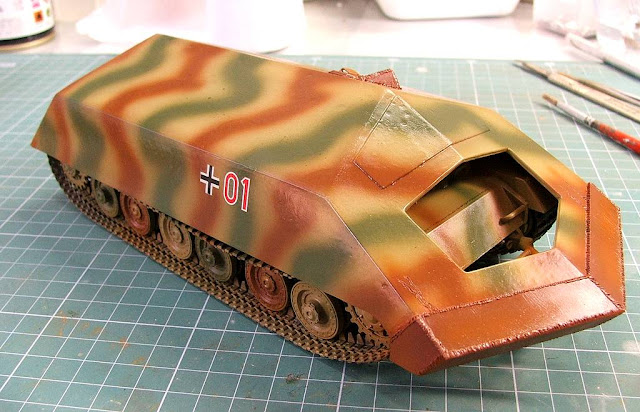 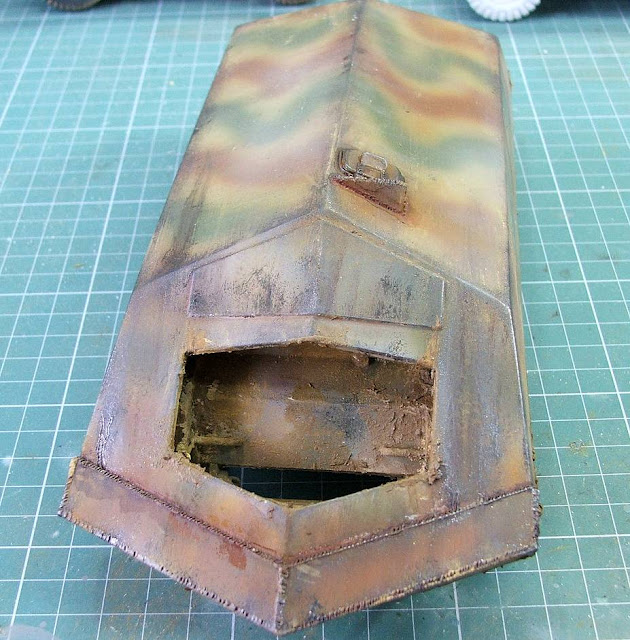 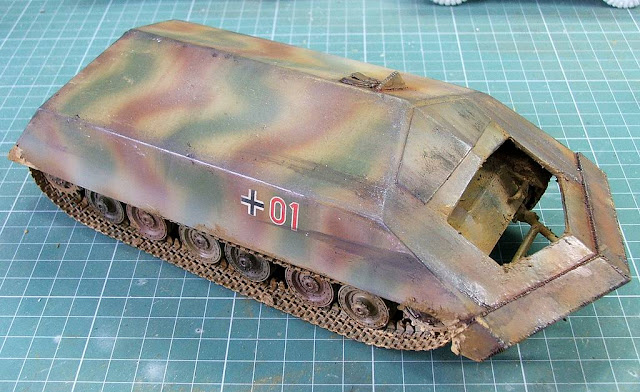 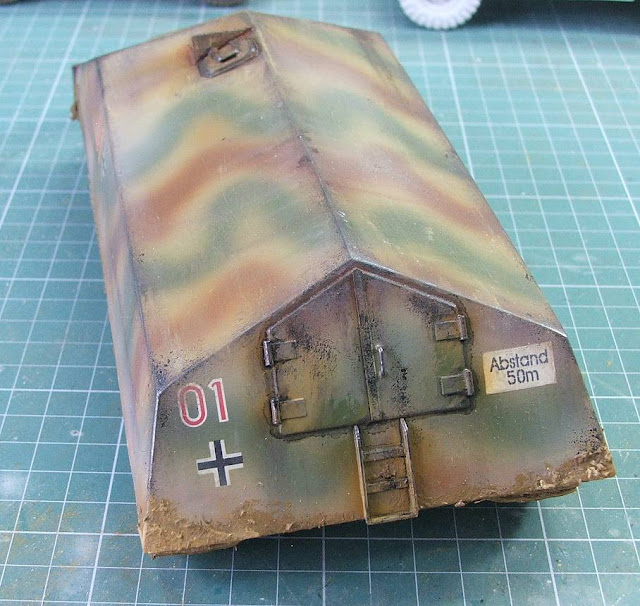 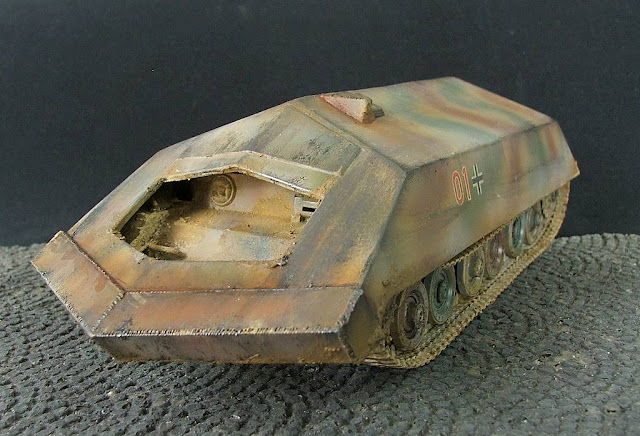 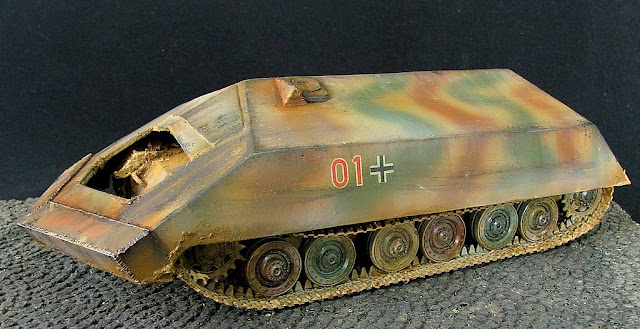 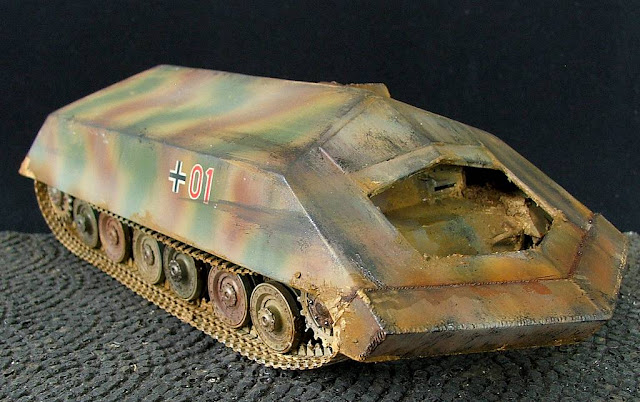 Ok, Gents...This is the typical build project that is fast and pleasurable to do. With little thing, we have a rare and unique vehicle in our collection ...
Worth it !!!
Source: panzerserra.blogspot.com
+ Sharelabels (1)Flag
AllRaumpanzer "Tiger" (P) - Rammtiger