Interview with James Islington, author of The Shadow of What Was Lost

Interview with James Islington, author of The Shadow of What Was Lost

Published:
Please welcome James Islington to The Qwillery as part of the 2016 Debut Author Challenge Interviews. The Shadow of What Was Lost is published on November 8th by Orbit. Please join The Qwillery in wishing James a Happy Publication Day! 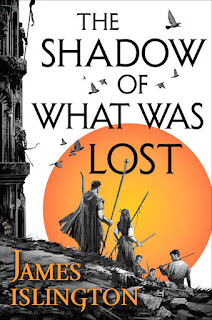 James:  Thanks for having me! I’d been aspiring to write something since I was a kid – simply because I’ve always enjoyed the process of creating stories - but it wasn’t until I turned 30 (about five years ago now) that I decided to really sit down and give it a serious shot.

James:  Definitely a hybrid... which took me ages to figure out. The first time I tried to write my book, I assumed I was going to be a pantser – my best ideas have always tended to come up as I go – but then I got 100,000 words in and discovered I’d written myself into a corner. After that, I figured I must be a plotter and got about 80,000 words into a new version of the story… only to realise that I was forcing characters in unnatural directions, just to keep things adhering to the outline.
So in the end, I figured out the skeleton of a plot - but I also left plenty of breathing room for things to change along the way. It felt (and still feels) like a messy method at times, with a lot of iteration involved, but ultimately it seemed to work for me.

James:  Stepping back and figuring out how much information to give the reader, and when. Because I already know everything about the world and the larger story, I can find it hard to assess when a lack of information crosses the line from being intriguing to just plain confusing. It’s obviously an important balance to find; too little mystery and the book risks becoming boring or predictable, but too little information and suddenly the story’s inaccessible. So I go back and forth on that a lot.

Fortunately, my editors have been great at nailing down that sort of thing. Between their input and that of my beta readers, I think I get the balance right.

TQ:  What has influenced / influences your writing? Specifically why is Brandon Sanderson's Mistborn series so inspirational?

James:  I think other stories – including genres other than fantasy, and media other than books – are big influences. If I’ve really enjoyed something about a narrative, it’s inevitably going to shape how I look at my own work. On the other hand, if a story has a great concept but I think its execution is lacking, that can inspire me too - I definitely get excited when I see the missed potential of something, and then I think about the way it could be done.

Mistborn was huge for me, because I’d lost much of my interest in reading fantasy during my twenties, and Brandon Sanderson’s series was the one that really brought me back to it. In some ways, it was a throwback to everything I’d always loved about fantasy - fun, heroic characters, a cool world, an intriguing story, dark moments, and great action sequences. But in other ways, it completely changed things. It was fast-paced. It had awesome plot twists. It used a ‘hard’ magic system that gave the characters clear, logical limitations. It was simultaneously a more accessible and a more complex read than what I was used to, and the whole experience really got me enthused about writing my own book again.

TQ:  Describe The Shadow of What Was Lost in 140 characters or less.

James:  Fast-paced, heroic epic fantasy with a tone along the lines of The Wheel of Time, with likeable characters and some dark twists.

TQ:  Tell us something about The Shadow of What Was Lost that is not found in the book description.

James:  Part of the plot actually deals with time travel... which I’m usually hesitant to say, because that’s something that can be really hard to do in both an interesting and logically consistent way. So much so, in fact, that when I hear another story deals with time travel, it will actually sometimes put me off reading it. But I took the concept very seriously when I decided to include it – it’s absolutely key to the way the world I’ve created works, and I’m always conscious of not using it as a lazy ‘get out of jail free’ plot device.

TQ:  What inspired you to write The Shadow of What Was Lost? What appeals to you about writing Epic Fantasy?

James:  I wouldn’t say there was a single, specific inspiration. I’ve always loved writing, and epic fantasy has been my favorite genre for a long time now, so it was just naturally going to be the one at which I tried my hand.

I think it’s the scope and stakes of epic fantasy that appeals to me most. When you’re writing about these massive, world-changing threats, the plot becomes intrinsically tied to the world you’re creating – so you’re not just writing a story set in another world, you’re writing a story about another world. Your world-building becomes crucial to your story rather than just window dressing, and that really makes the whole thing so much more interesting and engaging to me.

TQ:  What sort of research did you do for The Shadow of What Was Lost?

James:  I did decide to read up on some of the concepts and philosophies relating to time travel – particularly determinism (in essence, that all events are inevitable), eternalism (all points in time are equally ‘real’), and the principle of self-consistency (the idea that paradoxes while time-travelling are impossible to cause) – because it’s always bothered me when I’ve seen it used in a logically inconsistent way. I wanted to make absolutely sure that my understanding of those theories was correct before I integrated them.

TQ:  In The Shadow of What Was Lost who was the easiest character to write and why? The hardest and why?

James:  Davian was the easiest. I think he’s closest to me in personality – I didn’t really have to think too hard about how he would act in a lot of scenes, so writing his part of the story came naturally.

On the other hand, writing Caeden was pretty tricky at times. I was always having to consider how he’d react to situations not just based on his personality, but also how his perspective was colored by what he’d remembered of his past up to that point. I enjoyed writing his scenes, but they certainly required more attention than any of the others.

TQ:  Which question about The Shadow of What Was Lost do you wish someone would ask? Ask it and answer it!

Q: Is it possible to not be a huge Wheel of Time fan and still enjoy your book?

A: Yes! WoT is getting mentioned a lot in reviews of my book, for largely good reason, and don’t get me wrong – Robert Jordan’s series was special to me growing up and remains one of my all-time favorites, so it’s an incredibly flattering comparison. But, I think most people would concede that the series wasn’t perfect. It slowed down in the middle. It sometimes got side-tracked with its secondary characters. Some of its main characters had sections where they were frustrating to read about, for one reason or another.

As a fan, those were things I could always overlook because the rest – the vast, fascinating, complex world and story Robert Jordan created – more than made up for it. But as a writer, they’re also things I tried very hard to avoid in my own work. So if WoT didn’t click with you for some of those reasons, I still think checking out The Shadow of What Was Lost might be worth your time.

TQ:  Give us one or two of your favorite non-spoilery quotes from The Shadow of What Was Lost.

And so I lay down my head, weary with despair
For all that I needed, I lost.

James:  I’m currently editing the sequel to The Shadow of What Was Lost – called An Echo of Things to Come – and it’ll be released in 2017.

James:  It was a pleasure!


The Shadow of What Was Lost
The Licanius Trilogy 1
Orbit, November 8, 2016
Hardcover and eBook, 704 pages 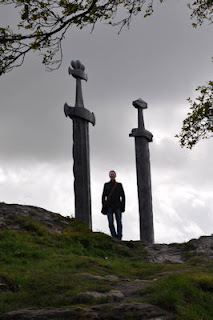 James Islington was born and raised in southern Victoria, Australia. His influences growing up were the stories of Raymond E. Feist and Robert Jordan, but it wasn't until later, when he read Brandon Sanderson's Mistborn series - followed soon after by Patrick Rothfuss' Name of the Wind - that he was finally inspired to sit down and write something of his own. He now lives with his wife and daughter on the Mornington Peninsula in Victoria.

1 Comments on The Qwillery: Interview with James Islington, author of The Shadow of What Was Lost

Report "Interview with James Islington, author of The Shadow of What Was Lost"