Interview with Sarah Pinsker, author of A Song For A New Day

Interview with Sarah Pinsker, author of A Song For A New Day

Published:
Please welcome Sarah Pinsker to The Qwillery as part of the 2019 Debut Author Challenge Interviews. A Song for a New Day was published on September 10, 2019 by Berkley. 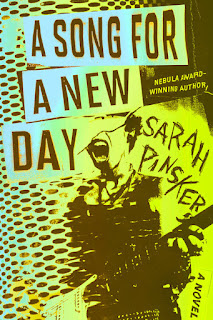 Sarah:  I wrote horse stories starting when I was around eight. I think some of them were just rewrites of books I'd liked. The kind of thing where there's a scruffy-looking horse about to go to auction, and the girl buys the horse for one dollar more than the meat buyers, and the horse turns out to be super fancy once he's healed/groomed/trained. I think my first genre story had to do with an open-mic singer taking bids on his soul from god and the devil. On brand.

Sarah:  I would normally say I'm an unrepentant pantser, but I had to turn in an outline for the novel I'm currently working on, and I have to admit it was a surprisingly fun and interesting process. It let me ask a lot of questions of the book early on that would normally have taken me a while to reach through trial and error and discovery. So...still a pantser, but with a new appreciation for the other modes? Does that make me a hybrid? My rebel spirit is still in pantsing.

Sarah:  These days it's a physical/mental thing. My usual writing spaces aren't feeling comfortable right now. I think maybe I need a standing desk. Once I'm writing I'm good, but getting to the point of sitting down and focusing is taking me more time than it used to, and staying seated is taking more discipline than it used to. We also adopted a new dog recently, and he's very good at convincing me I'd rather be playing with him.

Sarah:  What doesn't influence my writing? I guess I write a lot of stories rooted in place. I love traveling and I've been a lot of places. I love the challenge of trying to get at the heart of a place. Music. New technologies and my own paranoia about them. Dreams. Misread road signs, strange coincidences...

TQ:  Describe A Song For A New Day using only 5 words.

TQ:  Tell us something about A Song For A New Day that is not found in the book description.

Sarah:  The description makes the black and white/good and bad distinction between the Before and After periods the book describes, which makes it seem like the former was fine, and after is dystopic. The book has more shades of gray. I tried to acknowledge that the world we live in now, ostensibly the Before, is already dystopic for some people. There are aspects of the After that are better, or different in a not-entirely-bad way. Even characters who disapprove of the corporate shenanigans acknowledge some positive results of the changes. I find those shades far more interesting to write than a simple everything's-not-awesome dystopia.

TQ:  What inspired you to write A Song For A New Day? What appeals to you about writing Science Fiction and in particular a dystopian novel?

Sarah:  A Song For A New Day takes place in the same world as one of my previous stories, "Our Lady of the Open Road." I realized I had more to say about this world, and that there was more to explore than the slice of future tour life that story showed. There are so many interesting future music technologies, both for listening and for live music, but we're also living in a time where people have more and more distractions at home. Everything competes with the bands who are out there playing small clubs every night. I wanted to explore all sides of that question, and look at a future where some people might have even more reason to stay home, and some people might fight it.

I love science fiction for the expanded palette it provides. I like the "what ifs" and Theodore Sturgeon's "ask the next question." Many aspects of this novel reflect today's hopes and fears, but it's easier to look at those from a slight distance. It's an exaggeration of one possible path. This story takes place in a very near future, but you still need those world building tools to get there.

I didn't actually put the dystopia label on it myself, though in retrospect it obviously is one. In my head, it's just an exploration of a possible future.

TQ:  What sort of research did you do for A Song For A New Day?

Sarah:  This book took less research than a lot of short stories. The music stuff was stuff I knew. A little about VR and AR, I guess? I had to double check how long some of the distances between cities would take if highways weren't options for your rebel human-driven van.

TQ:  Please tell us about the cover for A Song For A New Day.

Sarah:  The cover was done by Jason Booher. I don't know who the photo captures. It reminds me of a couple of singers, but I don't know if it is actually any of them. It's not meant to represent a particular character. I had asked for a cover that looked like a DIY rock show poster, and this is exactly that.

TQ:  In A Song For A New Day who was the easiest character to write and why? The hardest and why?

Sarah:  I wrote about Luce previously in a story called "Our Lady of the Open Road," and part of why I returned to her was that her voice was so easy to slip into. She voices a lot of my own concerns. Rosemary was a little more challenging. Fun, also; there's an interesting challenge in trying to see the whole world through the eyes of someone who has never been anywhere or done anything. Rosemary consistently surprised me in her reactions to things. She made me look for the positives in the so-called dystopia I'd created, since it was the only world she'd ever known, and she didn't mind it all that much. Finding the positives was itself more difficult than the bad-made-worse parts.

TQ:  Does A Song For A New Day touch on any social issues?

Sarah:  Lots! The big ones involve the trauma that we're all living right now. Guns and the constant threat of violence. Our societal willingness to trade freedom for safety instead of addressing the root problem. School inequities. Prisons. Corporations. Data privacy.

I wanted to make this future one where, even though it's dystopic in many ways, some of our current problems have been addressed and have become non-issues. Accessibility in devices and the physical world. Asking before hugging people. Pronoun pins. It's not a perfect world – racism and homophobia still exist – but in the context of the spaces these characters inhabit, they've sought places where people would be striving to both see those situations and improve upon them. I wanted to normalize seeing differences and acknowledging them and then moving on from there to form community. I love, love, love writing queer characters and just letting them exist in community with each other. As in real life, we find each other, and support each other. I think letting multiple queer characters exist in a novel where queerness isn't the point is still a statement of its own, and I can't wait until it's not.

TQ:  Which question about A Song For A New Day do you wish someone would ask? Ask it and answer it!

Q: "Beyond the novelette 'Our Lady of the Open Road,' have you written or do you plan to write anything else about these characters?"

I adore standalone novels, and this is meant to be a standalone as far as these main characters are concerned, but I've written stories about some of the peripheral characters. There's an inventor/musician named Katja in the book who was the protagonist of my story "A Song Transmuted," which appeared in the Cyber World anthology and was reprinted in Sunspot Jungle and the upcoming A Punk Rock Future anthology. My story in the Apex Do Not Go Quietly anthology has a cameo from another character, Joni, as a kid.

TQ:  Give us one or two of your favorite non-spoilery quotes from A Song For A New Day.

"There were, to my knowledge, one hundred and seventy-two ways to wreck a hotel room."

Sarah:  I'm working on another near-future novel right now, set in a different near future. There's a dark fantasy novelette called "Two Truths and a Lie" that'll be on Tor.com, but I think that might not show up until next year. And I have a dozen short stories I'm dying to finish and send out into the world. 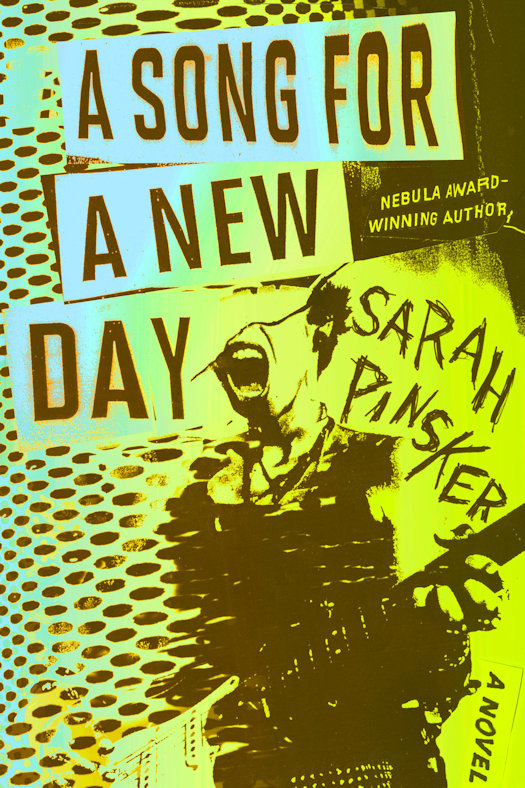 In this captivating science fiction novel from an award-winning author, public gatherings are illegal making concerts impossible, except for those willing to break the law for the love of music, and for one chance at human connection.

In the Before, when the government didn’t prohibit large public gatherings, Luce Cannon was on top of the world. One of her songs had just taken off and she was on her way to becoming a star. Now, in the After, terror attacks and deadly viruses have led the government to ban concerts, and Luce’s connection to the world–her music, her purpose–is closed off forever. She does what she has to do: she performs in illegal concerts to a small but passionate community, always evading the law.

Rosemary Laws barely remembers the Before times. She spends her days in Hoodspace, helping customers order all of their goods online for drone delivery–no physical contact with humans needed. By lucky chance, she finds a new job and a new calling: discover amazing musicians and bring their concerts to everyone via virtual reality. The only catch is that she’ll have to do something she’s never done before and go out in public. Find the illegal concerts and bring musicians into the limelight they deserve. But when she sees how the world could actually be, that won’t be enough.

Sarah Pinsker‘s Nebula and Sturgeon Award-winning short fiction has appeared in Asimov’s, F&SF, Uncanny, Strange Horizons, as well as numerous other magazines, anthologies, year’s bests, podcasts, and translation markets. She is also a singer/songwriter who has toured nationally behind three albums on various independent labels. Her first collection, Sooner or Later Everything Falls Into the Sea, was released in early 2019 by Small Beer Press. This is her first novel. She lives with her wife in Baltimore, Maryland.

Report "Interview with Sarah Pinsker, author of A Song For A New Day"