Bye bye February! It was a blast....sort of maybe..OK maybe not. February was a really topsy-turvy kind of month for me. It all started with one of my beloved fur-babies getting diagnosed with diabetes. Wow....what a change to my schedule and to my non-existent social life that having to give her insulin injections every 12 hours has meant. I don't know which one of us was more stressed out by the injections either! (p.s. it was me!!!!) To make February a bit less exciting the hubinator and I did a gut re-boot diet which involved a lot of salad and no treats. Valentines Day was a chocolate free affair. Then to top it off the last week of February turned unseasonably warm with highs of 17C (62F). While you were shoveling snow I was putting away my winter coat. With all this happening I still managed to finish a few books. Let me tell you all about them.

Up first is 5th instalment of Bec McMaster's London Steampunk: Blue Blood Conspiracy series - Dukes are Forever. This one starts just a few months after the Company of Rogues rescue their leader Malloryn from Russia. Back in London Malloryn is trying to adjust to life after he was kidnapped and tortured at the hands of Balfour's dhampyrs. Malloryn sees his nemesis Balfour at every turn and starts to suspect his wife Adele of being a spy for him. Determined that she won't get the upper hand he decides to seduce her and discovers all her secrets before she learns his. Adele is determined that Malloryn will not get the upper hand or her heart. Its a battle of wills while the Company of Rogues battle to save the Queen and London. Who will win? Your turn to find out for yourself.

I was a bit surprised that McMaster released this instalment so quickly after book 4 - To Catch a Rogue - which was published in October 2018. Although, it became quite clear how it was possible to release the book so quickly....it was quite disappointing. Adele and Malloryn's romance was a little lackluster especially given that it has been building across multiple books. The whole thing felt quite rushed and there really wasn't enough 'meat' to the plot. It will be interesting to see if McMaster has said goodbye to Steampunk London or whether there will be additional stories set in that world.

I listened to, rather than read the next book I have to tell you about - The Outlaw and the Upstart King by Rod Duncan. This is the second book in Duncan's The Map of Unknown Things series which is the follow on series from his Fall of the Gas-Lit Empire series. This story starts from the POV of a new character, Elias. He is out for revenge, revenge for the people that cut off his thumbs and made him an outlaw. He has returned to his native Newfoundland in search of justice. However, he meets Elizabeth a mysterious barmaid who is much more than just a barmaid. It's not long before the story switches to Elizabeth, who along with her friends, crashed onto the unforgiving Newfoundland coast. They are desperate to leave and Elias might be the only way to escape.

I have to admit I had no clue what was going on for the first few chapters. It had been awhile since I read The Queen of All Crows (The Map of Unknown Things 1) and I had to jog my memory of what that book was about it. It didn't take long however before was completely gripped. I couldn't figure out how on earth that Elizabeth was going to avoid becoming a slave or worse at the hands of the main antagonist, Jago. Elias seemed incapable of helping himself let alone anyone else so I was flummoxed as to how she would escape. I would definitely describe this as a slow burn plot but it is well worth a read. Duncan creates such interesting characters and then places them in situations where you can't imagine how they are going to survive. I really like the narrator and thought she did an excellent job with both male and female characters. Well done Duncan. It is hard to follow the books from The Fall of the Gas-lit Empire with another terrific series.

My final book is is a short story. The Test by Sylvain Neuvel (one of my all time fave authors for his The Themis Files) is set in England with Idir about to take the British citizenship test. A simple multiple choice test has turned into a game of life or death and Idir gets to decide.

I had to take the British citizenship test so this story resonated with me and boy I am lucky my test wasn't this harrowing. This short story is a real page turner and rather tragic so be prepared. I don't want to say too much as I don't want to ruin the surprise. Don't miss out and get it on your TBR.

Well that is all for me folks. I hope you have had a less challenging February than I had. I am looking forward to smoother sailing in March and watching my daffodils come out. Until next month...Happy Reading! 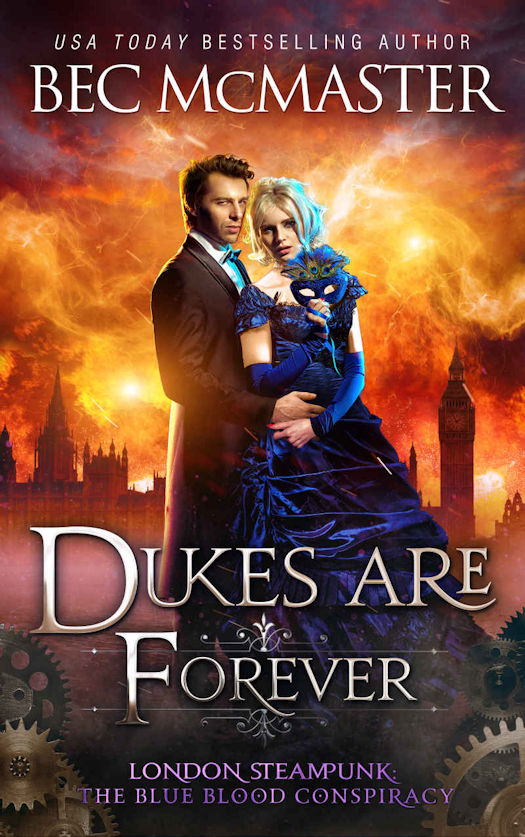 A compromising situation forced him into marriage. But has his wife been working for the enemy all along?

In a steam-fuelled world where vampires once ruled the aristocracy, a dangerous conspiracy threatens to topple the queen, and the Duke of Malloryn knows his nemesis has finally returned to enact his plans of revenge.

Malloryn can trust no one, and when incriminating photographs surface—of an enemy agent stealing a kiss from his wife—he is forced to question just why his wife, Adele, trapped him into marriage.

Is she an innocent pawn caught up in a madman's games, or is she a double agent working against him?

The only way to discover the truth is to seduce her himself...

Adele Hamilton may have agreed to a loveless marriage in order to protect herself, but that doesn't stop her heart from yearning for more.

Her husband promised her a cold marriage bed. He swore he'd never touch her. But suddenly he's engaged in a campaign of seduction—and the only way to keep her wits about her is to fight fire with fire.

The ruthless beauty has locked her heart away, but can she deny the passion that flares between them? And when the truth emerges, will she be the only thing that can save Malloryn's life?

Or the weapon his enemy will wield against him?

Join Bec McMaster in this ultimate showdown, as the Blue Blood Conspiracy reaches its final, thrilling conclusion. From glittering ballrooms to blood-soaked gaming hells, the Duke of Malloryn must battle his most dangerous opponent yet.... The woman who just might steal his heart.

Don’t miss any of the London Steampunk: The Blue Blood Conspiracy books!

Book 1: Mission: Improper
Book 2: The Mech Who Loved Me
Book 3: You Only Love Twice
Book 4: To Catch A Rogue
Book 5: Dukes Are Forever

The Outlaw and the Upstart King
The Map of Unknown Things 2
Angry Robot, January 8, 2019
Trade Paperback and eBook, 384 pages 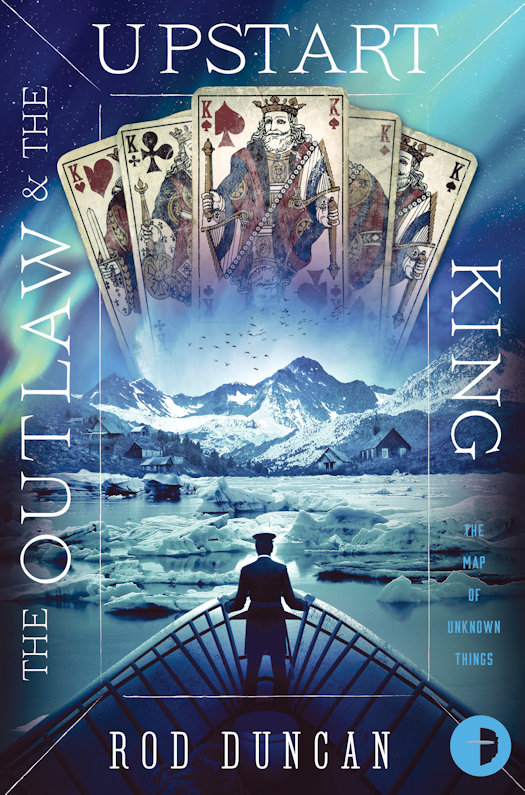 Elizabeth Barnabus returns, to uncover the secrets and mysteries of the Gas-Lit Empire, in the startling sequel to The Queen of All Crows.

As it is inked, so shall your oaths and bindings be.

Tattoos are the only law on the Island of the Free, and there can never be a king. Every clan agrees on that. But a returning exile has smuggled something across the water that could send the old ways up in flames. Elias wants revenge on the men who severed his oaths and made him an outlaw. But, if his wealth and honour are to be restored, he’ll need help from the most unlikely quarter – a mysterious woman, landed unwontedly on Newfoundland’s rocky shore. 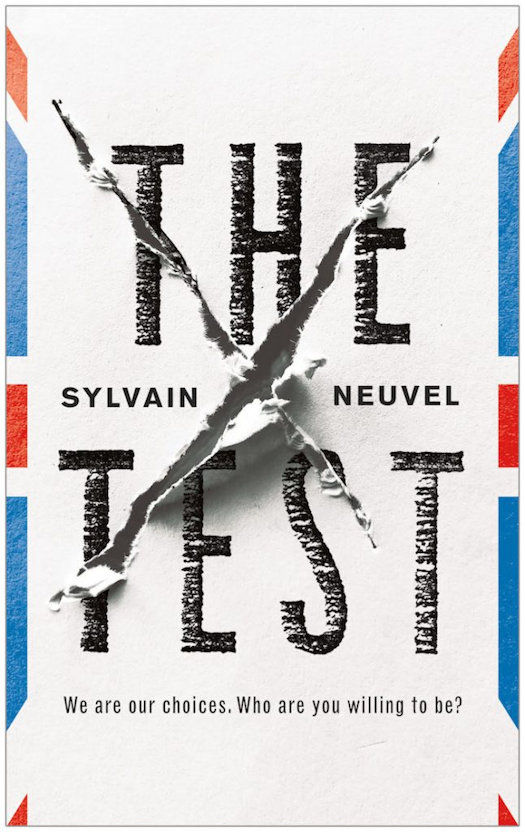