Published:
The Qwillery is delighted to welcome Nico Rosso:


I started a war.

I did it for love.

Romance. That’s where it all started. I was writing a romance story and wanted a way to get the blood pumping. It had to be big. A grand stage for the heroic action of space soldiers and Earthlings fighting for the life of their planet. So I created the Limit War. Good versus evil on a galactic scale. Entire worlds threatened.

The romance genre needs big gestures. The heroes defeat the villains. Sometimes these are beasts, in my case an evil alien race called the Dusk. Other times, the most dangerous threat to the hero is internal, doubt or fear or other emotional hurdles. Either way, the obstacles are overcome in a dramatic way that proves the strength of the hero.

Because I write Sci-fi romance, I can make the stakes high and challenge the heroes to overcome incredible threats. And I’m not just talking about the men. The female characters are fully capable of fighting. When I set about forming the story and characters of TAKEN TO THE LIMIT, I knew my heroine had to be strong.

I find strong women sexy. And they’re so much more fun to write than women that might shrink from trouble. In the story, Korina is capable, adaptable and can overcome her fear to face the threats around her. She is strong enough to fight for the love she feels for the hero, Sergeant Morrow. My hope in writing her was that the female readership would bond with her as a viable fantasy counterpart.

In creating Sergeant Morrow, I needed to think about not what would make him sexy to me, but to the reader. I am blessed to be married to a romance author, Zoë Archer, and we are constantly discussing stories and characters. From these conversations, I was able to shape Morrow. He’s strong, with the history of his battles written as scars on his body. Morrow is a veteran soldier. But under that stoic armor, there is a heart. He’s a fighter, with mystery and soul.

My connection to Morrow is what makes romance an exciting genre for me. It is a venue for the grand action we don’t often get to perform in the real world. It isn’t every day that I get to crash through windows on motorcycles or fire a silver round from my flintlock into the werewolf. Through Morrow, I’m allowed to fight Dusk Warriors with precision and sweep Korina not only into the fight, but into my arms.

In the same way that Korina is taken into the Limit War, I wanted to do the same for the reader. That was why I started it on Earth. An unknown war might be raging all around us. Once we’re introduced to it, once we have no choice but to take sides in the conflict and fight, then the stories can radiate out to anywhere in the universe.

And in that universe, the possibilities for big action are endless. But the purpose of that action needs to stay focused. The conflicts are opportunities for the hero and heroine to overcome obstacles and prove their love for each other.

Grand gestures. They’re hard to find in the real world. They certainly do occur and there is proof everyday that real people are heroes. But this is Sci-fi romance. I had to do something big. So I started a war. For love.

QUESTION: I like Sci-fi as an environment for romance because of the possibilities for grand gestures from the hero and heroine. What kind of environment sets the stage for the kind of romance you like?

Taken to the Limit 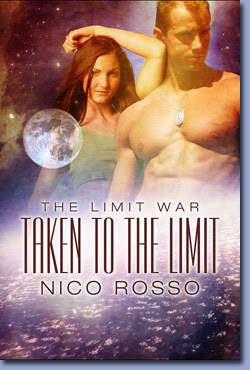 “Welcome to the Limit War.” E.R. Doctor Korina Antonakis thinks she has mastered the chaos of her work and life. In a flash of light, everything changes. A man appears, a soldier from another world. Sergeant Morrow is a Nightfighter, an elite soldier who always battles alone. But he needs an ally on Earth, a doctor. In the dark of night, he opens Korina's eyes to The Limit War. And Earth is on the front lines. More amazing than the interstellar war, is the soldier before her. He is strong and stoic, a veteran, but beneath the armor, Korina finds the heart of a man. And in Korina, Sergeant Morrow finds the soul of a warrior to match his own. Their lives had started light-years apart, but the attraction between them pulls like destiny. Their desire is real, but the enemy needs to be driven from Earth. Can Korina and Sergeant Morrow's passion survive in the Limit War?

Nico Rosso has writing in his blood. He comes from a family of writers and learned quickly that there are stories going on all around us. With inspiration ranging from 1930s pulp comics to the disco-laced space epics of the Seventies to the high-concept films of the Eighties, Nico always found Sci-fi to be a fertile genre for grand action, strong heroes, dynamic heroines and exotic settings. He hopes you enjoy the journey with him.

Nico is giving away 1 copy in PDF format of Taken to the Limit.

How:  Leave a comment answering the question Nico posed: "I like Sci-fi as an environment for romance because of the possibilities for grand gestures from the hero and heroine. What kind of environment sets the stage for the kind of romance you like?" You must answer the question or your entry will not be counted.

Who & When:  The contest is open to all humans on the planet earth with an e-mail address. Contest ends at 11:59pm US Eastern Time on Friday, December 8, 2010.

10 Comments on The Qwillery: Guest Blog & Giveaway - Nico Rosso, Author of Taken to the Limit