Interview with K. S. Villoso, author of The Wolf of Oren-Yaro

Interview with K. S. Villoso, author of The Wolf of Oren-Yaro

Published:
Please welcome K. S. Villoso to The Qwillery as part of the 2020 Debut Author Challenge Interviews. The Wolf of Oren-Yaro is published on February 18, 2020 by Orbit. 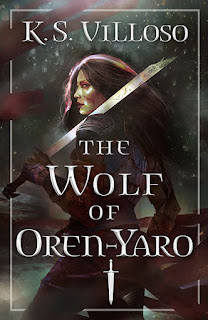 K. S.:  This was back in 1st grade and was a short, incoherent story that was a mish-mash of genres and just about everything I was into at the time. I think the main character was a dog…

K. S.:  I’m essentially whatever is convenient at the time. I outline before I start writing. The first draft will look nothing like the outline. Sometimes I will re-outline partway through the novel, scrap that draft, and start again. Sometimes I will follow the outline perfectly for three chapters and then realize I have a gap towards the next plot point… in which case I will pants my way through. Unfortunately, I may not even reach that next plot point and everything will change based on that part that I pantsed.

It’s a sort of perfect, contained chaos. I have a hard time trying to make it make sense to others, but it always makes sense to me…

K. S.:  It’s hard to keep focus when I have so many things I want to explore all at once. That means my first drafts are often very messy, and each subsequent draft is a matter of keeping some ideas and throwing the rest out. I also get bored easily—I can’t just write stories that go from point A to B…so I like creating puzzles out of my work and then sitting down and trying to work it out through the process of writing. This means every single one of my manuscripts require a lot of work from my end just to sort my thoughts and the story out.

K. S.:  I’ve probably mentioned author influences in other interviews elsewhere, so I’m going to talk a bit more about genre… particularly, the horror influence in my work. Along with epic fantasy, I truly enjoy horror, and I probably have seen more horror movies than anything else combined. I love the psychological aspect of it, of using fear and very high tension as tools in storytelling, and of figuratively—maybe literally—using “ghosts” to deepen character conflicts. People have mentioned how my plots are anxiety or stress-inducing, and that’s mostly this influence coming into play—I like focusing on character dilemmas first and then slowly, very slowly, revealing the plot one puzzle piece after another…all after the external conflicts have reared their ugly (again, very often literally) heads.

TQ:  Describe The Wolf of Oren-Yaro using only 5 words.

TQ:  Tell us something about The Wolf of Oren-Yaro that is not found in the book description.

TQ:  What inspired you to write The Wolf of Oren-Yaro? What appeals to you about writing Fantasy?

K. S.:  The Wolf of Oren-yaro was my take on the classic hero’s journey/chosen one story…from the point-of-view of a woman who is both a wife and a mother. One who, incidentally, is also the daughter of a man many people consider the villain. The situation is rife with challenges that made it very interesting for me to explore.

Writing fantasy is great because it allows you to use worldbuilding as an added tool to carry the story through. By that I mean you can basically make things up to drive home the point, or create an elaborate metaphor—you can adjust the environment, or alter history and time itself to explore a certain theme. So you can create a really powerful story that can go beyond plot or character.

TQ:  What sort of research did you do for The Wolf of Oren-Yaro?

K. S.:  I draw from my culture and upbringing for a lot of the worldbuilding; it’s not so much learning about things from the outside, but bringing out what I know from the inside, and then trying to make sense of it on the proverbial paper. So there is no specific “research”—there is however a lot of introspection, a lot of discussion over topics and issues that would lead me to look up certain facts to support or disprove an argument.

TQ:  Please tell us about the cover for The Wolf of Oren-Yaro.

K. S.:  I am one of the blessed, lucky few who got a cover depicting not just Queen Talyien’s image, but Talyien as a character and person. You can get a sense both of her determination and her challenges from one look at the cover. In the cover, she is also carrying her father’s kampilan. It doesn’t actually show up until Book 3, but the symbolism is there as Talyien really is carrying the burdens her father—a dark figure in history—has left her.

TQ:  In The Wolf of Oren-Yaro who was the easiest character to write and why? The hardest and why?

K. S.:  The easiest character is probably…and obviously…Khine. I think it’s because I share the same background as him, coming from the lower rungs of society while for the longest time brushing elbows with people who have it better. And while I’ve thankfully never had to resort to becoming a thief, I may have once or twice schemed myself out of messes. Khine goes with the flow while actively strategizing his next move; this is the easiest kind of character for me to write because it is very, very close to how I’d do things myself.

Talyien, on the other hand…while her voice came rushing to me like a wave, she also possessed an intensity that kept me on my toes. Half the time I have this perfect plot point set up and she’s like “No.” So now I have to go rushing after her to try and fish her out of whatever situation she’s in. That impulsive, hotheaded nature made it difficult to follow the original outline, as she lands herself in trouble one after another and I had to find a way to get her out of it while maintaining the story’s momentum.

TQ:  Does The Wolf of Oren-Yaro touch on any social issues?

K. S.:  If readers want to read it as nothing more than an action-adventure fantasy story, they are welcome to do so. It’s written to entertain, it has a plot, it has great character interactions and some pretty cool fight scenes. There is absolutely no obligation to see it beyond that.

If readers want to stop for a moment and look beyond that outer layer, though, there’s quite a bit—not so much that they’re added in, but because these issues are an integral part of the characters, especially Queen Talyien’s, and the world they find themselves in. The challenges a woman faces that perhaps a man in her position wouldn’t have to worry about, for instance; power and the many ways it can corrupt, social inequalities, the effect of political struggles on the common people.

TQ:  Which question about The Wolf of Oren-Yaro do you wish someone would ask? Ask it and answer it!

K. S.:  “So Kay, I noticed you put a particular importance on heists in this book…is that just random or is this epic fantasy also a heist novel in disguise?”

“Why, thank you for noticing that, Kay. The introduction of the con-artist and thief, Khine Lamang, is a marker, a foreshadowing of what’s about to come. This series, after all, is about tricks and schemes, about believing one thing when really it’s about something else. We get more heists as the series progresses, culminating to that one, final trick…”

“I can’t spoil you, you already know how it ends!”

“So let me just chime in with your readers: YOU’RE A MONSTER, HOW COULD YOU, YOU SHOULD BE ASHAMED OF YOURSELF.”

“Somebody take this doppelganger away.”

TQ:  Give us one or two of your favorite non-spoilery quotes from The Wolf of Oren-Yaro.

There are people who find themselves in a precarious situation, believe
themselves betrayed, and will do nothing but run their tongues ragged in
criticizing the world for not helping them better. Like wailing dogs in the rain,
they strain against their leashes instead of turning to gnaw their bonds to
freedom, or sit on their piss and wait for pity.

Betrayal has a funny way of turning your world upside down. As familiar as I
had already been with it by that point, it still amazed me how far I could
stretch that moment of denial. The thought of what had been—of what could
yet be—persisted. Perhaps it is not the same for most people. Perhaps, when
you love less, it is easier not to let the emptiness become a cavern from which
you can no longer see the sun.

K. S.:  Well, we’re going to hit the ground running with this series. The sequel, THE IKESSAR FALCON, is out on September 29, 2020. It’s a chonky book, so those hesitant to give THE WOLF OF OREN-YARO a try because it’s a new series will have plenty to keep themselves busy until Book 3…which is out in the first half of next year.


The Wolf of Oren-Yaro
Chronicles of the Bitch Queen 1
Orbit, February 18, 2020
Trade Paperback and eBook, 496 pages 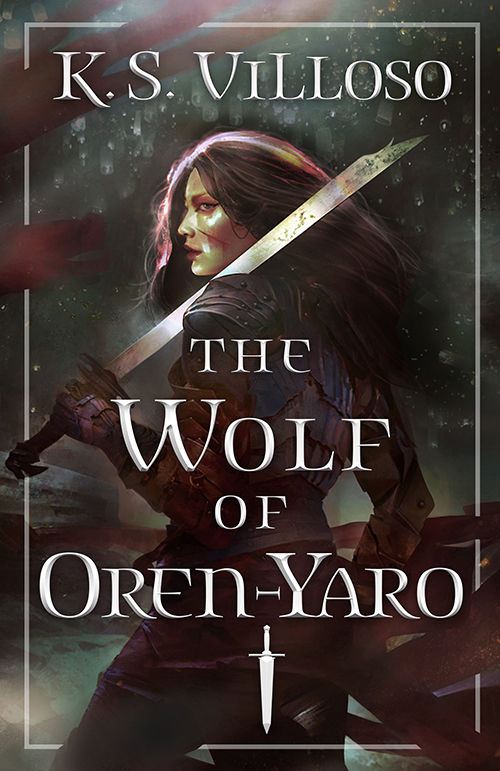 A queen of a divided land must unite her people, even if they hate her, even if it means stopping a ruin that she helped create. A debut epic fantasy from an exciting new voice.

“They called me the Bitch Queen, the she-wolf, because I murdered a man and exiled my king the night before they crowned me.”

Born under the crumbling towers of Oren-yaro, Queen Talyien was the shining jewel and legacy of the bloody War of the Wolves, which nearly tore her nation apart. But her arranged marriage with the son of a rival clan should herald peaceful days to come.

However, her husband’s sudden departure before their reign begins puts a quick end to those dreams, and the kingdom is fractured beyond repair.

Years later, Talyien receives a message, one that will send her across the sea. What’s meant to be an effort at reconciling the past becomes an assassination attempt. Stranded in a land she doesn’t know, with no idea whom she can trust, Talyien will have to embrace her namesake.

A wolf of Oren-yaro is not tamed.

K.S. Villoso writes speculative fiction with a focus on deeply personal themes and character-driven narratives. Much of her work is inspired by her childhood in the slums of Taguig, Philippines. She is now living amidst the forest and mountains with her husband, children, and dogs in Anmore, BC.

1 Comments on The Qwillery: Interview with K. S. Villoso, author of The Wolf of Oren-Yaro

Report "Interview with K. S. Villoso, author of The Wolf of Oren-Yaro"