Interview with Shaun Hamill, author of A Cosmology of Monsters

Interview with Shaun Hamill, author of A Cosmology of Monsters

Published:
Please welcome Shaun Hamill to The Qwillery as part of the 2019 Debut Author Challenge Interviews. A Cosmology of Monsters is published on September 17, 2019 by Pantheon. 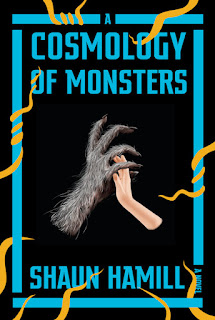 Shaun:  The first piece of fiction I remember was a story I wrote for “Young Author’s Day” at my school in 4th grade. I’m pretty sure it was a straight rip-off of the first Star Wars movie and the X-Men cartoon version of Days of Future Past. It had Sentinels and a Death Star. My teacher liked it, though, and so did my classmates. I’ve been chasing that approval-high ever since.

Shaun:  I’m a hybrid. I’ve tried both methods “pure” and neither quite works for me. If I plot too much, the story can get stale and boring, but if I don’t plot at all, I write myself into a corner. I like to plot a little ahead and leave plenty of blank space ahead of me so I can surprise myself (and hopefully, by extension, my reader).

TQ:  What is the most challenging thing for you about writing? Does living "...in the dark woods of Alabama..." affect (or not) your writing?

Shaun:  The most challenging thing about writing is coming up with a project that marries an interesting plot to a strong emotional hook. I’ve come up with lots of great ideas for stories, but haven’t been able to write them because I had trouble caring about the characters. If I’m not invested in the people, the best high concept in the world won’t save me.

Living in the dark woods of Alabama has been good for my writing, I think. I grew up in a big suburb, nothing but concrete as far as I could see, and Alabama has a lot of unspoiled nature. It’s a haunted place, quiet and foggy, full of decaying houses and abandoned gas stations on winding roads. It’s the perfect place for dark daydreaming.

Shaun:  My earliest influences were movies. For a long time I thought I wanted to be a filmmaker, and I spent most of high school writing screenplays. I think that cinematic mindset shows in my fiction. I’m a scene-focused writer and I’m still learning character interiority and how to summarize big swatches of time.

I was always a reader, as well. I read a lot of Stephen King and Anne Rice and John Irving as a kid, and I think their influence is all over A Cosmology of Monsters too.

The other big influence on my writing was a great creative writing teacher at the University of Texas at Arlington—her name is Laura Kopchick, and she still teaches there. She was the first person to take my writing ambition seriously, and she mentored me even after I graduated from college. Everything she told me to read, I read. She taught me how to pay attention to language and character, and to move beyond simple twist-ending plots and easy clichés into murkier, more interesting narrative territory. I’m still trying to impress her whenever I write something.

TQ:  Describe A Cosmology of Monsters using only 5 words.

TQ:  Tell us something about A Cosmology of Monsters that is not found in the book description.

Shaun:  A Cosmology of Monsters is secretly a bunch of love stories disguised as a horror novel.

TQ:  What inspired you to write A Cosmology of Monsters? What appeals to you about writing Horror / Dark Fantasy?

Shaun:  I’d always wanted to write a book about a family running a business, and I went to a lot of haunted houses in my 20s. At some point the two ideas melded. I was curious—what sort of people run a haunted house? What’s it like to take your lunch break while your customers are screaming themselves silly a few feet down the hall? What’s it like to dress as a monster for weeks, months, or years on end? It felt like a perfect backdrop for a troubled family.

As to your second question, I’ve been thinking a lot about the appeal of horror and dark fantasy lately. I’ve always been drawn to both, but not for gore, or even terror. What I love about the genres is the sense of dark wonder they can provide—a glimpse beyond the veil at things unknown and unguessed. Strange things at the corners of our reality, waiting to step in. I get the same feeling when I drive down a twisting Alabama road at night, with no illumination but the moon and my headlights. Shadows flicker in the woods to my left and right, and I know it’s probably just a trick of the light, but maybe … maybe not.

This sense of mystery is my favorite feeling in fiction and in life.

TQ:  What sort of research did you do for A Cosmology of Monsters?

Shaun:  On the literature side, I read all of H.P. Lovecraft’s fiction, and any scholarship/criticism of his work that I could find. I also read some surveys of the history of horror fiction, re-read my favorite Stephen King novels, and dipped my toes into other horror writers—Joyce Carol Oates, Thomas Ligotti, Shirley Jackson, Peter Straub, Dean Koontz, etc.—to try and round out my understanding of the tradition I was writing in.

For the haunted house stuff, some of it is adapted from real life. I did theater in high school, so I was familiar with the process of putting together an amateur production—sets, makeup, lines to memorize, etc. All of that translated easily enough to the haunted house milieu. I also got to tour a closed haunted house while I was working on a short film a few years ago, and seeing the place with all the lights on made a lasting impression (and was another inspiration for the book).

In addition to my personal experience, I watched every documentary about haunted house attractions that I could find. I solicited stories from friends, googled how-to articles, watched web series, listened to podcasts, and trolled Internet forums. Basically I used every resource I could think of!

TQ:  Please tell us about the cover for A Cosmology of Monsters.

The cover illustration is by Na Kim, and the jacket was designed by Kelly Blair. It was their first pass at the cover for the book, and everyone on the Cosmology publishing team loved it so much that we never tried another. To stay spoiler-free, I’ll just say I think it’s an image that sums up the themes of the book very nicely.

TQ:  In A Cosmology of Monsters who was the easiest character to write and why? The hardest and why?

Shaun:  Noah’s sister Eunice was the easiest to write. I never had trouble locating her emotional state in a scene, or knowing what she was going to say. She was a gentle presence, easy to spend time with. Margaret, Noah’s mother, was the hardest, because she has the longest, most complex arc in the book. Without giving too much away, the book features some big jumps in time, and Margaret’s state of mind was always the toughest to locate each time I started a new section. It was also a tricky balancing act, because I wanted her to be sympathetic but also cold and pragmatic.

TQ:  Does A Cosmology of Monsters touch on any social issues?

Shaun:  Yes. It deals with religion, sexuality, and gender power dynamics, among other things.

TQ:  Which question about A Cosmology of Monsters do you wish someone would ask? Ask it and answer it!

Q: Will you write a sequel?

A: Yes! If the book does well and somebody lets me! I think there’s at least one or two more stories to tell in this world if people want them.

TQ:  Give us one or two of your favorite non-spoilery quotes from A Cosmology of Monsters.

Shaun:  I really love the opening, and that’s about as non-spoilery as it gets!

I started collecting my older sister Eunice’s suicide notes when I was ten years old. I still keep them all in my bottom desk drawer, held together with a black binder clip. They were among the only things I was allowed to bring with me, and I’ve read through them often the last few months, searching for comfort, wisdom, or even just a hint that I’ve made the right choices for all of us.
Eunice eventually discovered that I was saving her missives and began addressing them to me. In one of my favorites, she writes, “Noah, there is no such thing as a happy ending. There are only good stopping places.”
My family is spectacularly bad at endings. We never handle them with grace. But we’re not great with beginnings, either. For example, I didn’t know the first quarter of this story until recently, and spent the better part of my youth and young adulthood lingering like Jervas Dudley around the sealed tombs of our family’s history. It’s exactly that sort of heartache I want to prevent for you, whoever you are. For that to happen, I have to start at the outermost edges of the shadow over my family, with my mother, tall, fair-skinned and redheaded Margaret Byrne, in the fall of 1968.

Shaun:  I’m working on a new novel right now. I don’t want to say too much because I’m superstitious, but I will say I’m excited about the project. It’s more ambitious than Cosmology, but still in the dark fantasy genre. I hope I’ll be able to finish and share it sooner rather than later!

Shaun:  Thanks so much for having me! I hope you and your readers will check out A Cosmology of Monsters and let me know what you think! I’m in all the usual places—FB, Instagram, Twitter, etc.—and I’d love to hear from you (as long as you’re nice)!


A Cosmology of Monsters
Pantheon, September 17, 2019
Hardcover and ebook, 336 pages 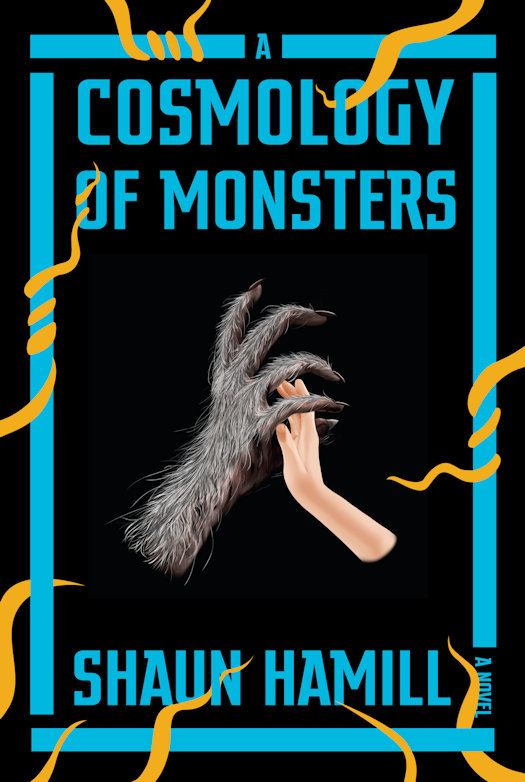 “If John Irving ever wrote a horror novel, it would be something like this. I loved it.” —Stephen King

His father saw them—and built a shrine to them with The Wandering Dark, an immersive horror experience that the whole family operates.

His practical mother has caught glimpses of terrors but refuses to believe—too focused on keeping the family from falling apart.

And his eldest sister, the dramatic and vulnerable Sydney, won’t admit to seeing anything but the beckoning glow of the spotlight . . . until it swallows her up.

Noah Turner sees monsters. But, unlike his family, Noah chooses to let them in . . .

A native of Arlington, Texas, SHAUN HAMILL holds an MFA from the Iowa Writers’ Workshop. He lives in the dark woods of Alabama with his wife, his in-laws, and his dog. A Cosmology of Monsters is his first novel.

Report "Interview with Shaun Hamill, author of A Cosmology of Monsters"