HANG FIRE is a steampunk short story set in late 1800's America. It takes place between the Age of Steam book #1, DEAD IRON and book #2 TIN SWIFT. The story is broken into 20 "chapters" and posted, one chapter at a time, on 20 awesome blogs. To read the whole story, start at chapter 1 at www.candacesbookblog.com and follow the "read the next chapter" links at the end of the post.

“Screaming at me won’t make me run faster.” Captain Hink caught the deadman’s grip inside the Swift’s port door and hauled himself inside the airship. None too soon. The Swift was already off anchor and lifting to the wind.

Molly Gregor stood just inside the door, holding one of the brace beams, her shirt sleeves rolled up, and her breathing gear hanging in the other hand. She kept her dark hair cut short at the ears, and insisted on wearing men’s boots and breeches, not that Hink or any of his crew cared to argue her out of it. She was stubborn, loyal, and the best damn boilerman in the skies.

“I was not screaming at you,” she said.

“Some reason you’re not at my fires?” Hink asked, stomping up toward the helm of the small ship. “Wind’s on the shift. This ain’t going to be an easy launch.”

“If you’d said your good-byes last night, like I told you to,” Molly said, heading the other way, “we’d have been gone before sun up. On good winds. Starting to think you got some kind of affliction for flying hard.”

She slammed the metal door behind her, and Hink grinned. Molly might talk up a storm, but she had a heart wide as a prairie sky. He knew she would miss the boy, George Rucker, too. For all that Hink had stood in as his father of sorts since George’s brother died, Molly, in her way, had stood in as a mother.

“Mr. Seldom,” Hink said to his second while stomping his boots into the belts on the floor in front of the wheel. “Give me headings to the east glim stake above the Sawtooth Range. Mr. Ansel, Mr. Guffin, pull anchor and ready to pound sky.”

“Aye, Captain,” his crew said at once. Well, except the Irish, Mr. Seldom. That man conserved words like a camel holding water.

As soon as they were up anchor, the Swift lifted like a bird off her fetters. She leaped to the edge of the canyon. Sails spread to catch the updraft as steam, and a hint of glim, punched her up, hard and fast, through the clouds.

The Age of Steam 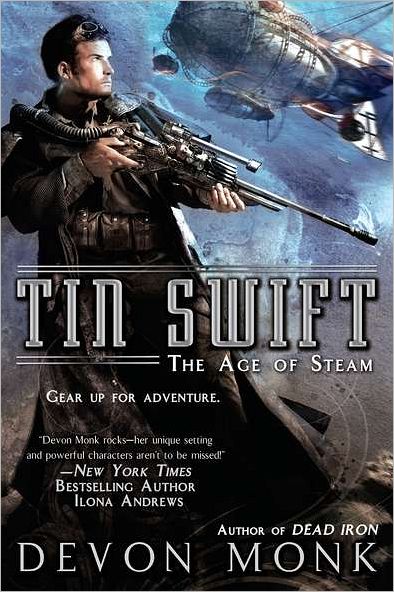 IN STEAM AGE AMERICA, MEN, MONSTERS, MACHINES, AND MAGIC BATTLE TO CLAIM THE SAME SCRAP OF EARTH AND SKY. IN THIS CHAOS, ONE MAN FIGHTS TO HOLD ON TO HIS HUMANITY—AND HIS HONOR…

Life on the frontier is full of deceit and danger, but bounty hunter Cedar Hunt is a man whose word is his bond. Cursed with becoming a beast every full moon, Cedar once believed his destiny was to be alone. But now, Cedar finds himself saddled with a group of refugees, including the brother he once thought lost.

Keeping his companions alive is proving to be no easy task, in part because of the promise he made to the unpredictable Madder brothers—three miners who know the secret mechanisms of the Strange. To fulfill his pledge, Cedar must hunt a powerful weapon known as the Holder—a search that takes him deep into the savage underbelly of the young country and high into the killing glim-field skies defended by desperate men and deadly ships.

But the battles he faces are just a glimmer of a growing war stirring the country. To keep his word Cedar must navigate betrayal, lies, and treacherous alliances, risking everything to save the lives of those he has come to hold dear… 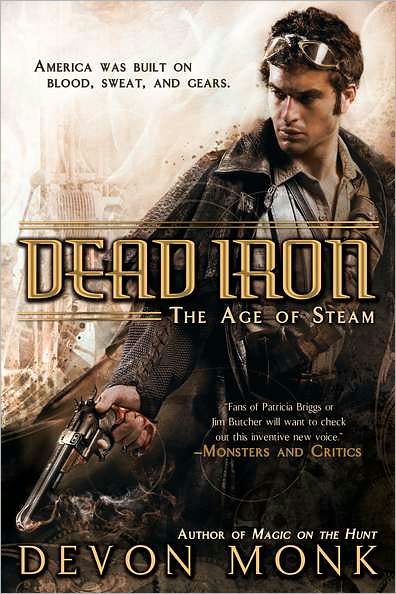 Welcome to a new America that is built on blood, sweat, and gears...

In steam age America, men, monsters, machines, and magic battle for the same scrap of earth and sky. In this chaos, bounty hunter Cedar Hunt rides, cursed by lycanthropy and carrying the guilt of his brother's death. Then he's offered hope that his brother may yet survive. All he has to do is find the Holder: a powerful device created by mad devisers-and now in the hands of an ancient Strange who was banished to walk this Earth.

In a land shaped by magic, steam, and iron, where the only things a man can count on are his guns, gears, and grit, Cedar will have to depend on all three if he's going to save his brother and reclaim his soul once and for all...

TQ:  Why did you set your steampunk novels in what is considered a non-traditional steampunk setting (i.e., not Victorian London).

Devon:  I suppose the shortest answer is because the story demanded it. Cedar Hunt is searching to find an uneasy peace with who he is, and how he fits into the quickly changing world around him, just as America in the 1800's struggles to define what kind of country it will be and how it fits into the larger world. During that time, America is also host to a wonderful and horrifying clash of cultures. Somehow, from all that turmoil, a sense of hope, frontier-style invention, and genius emerged. I think it's an excellent and really fun setting for steampunk.


TQ:  What sort of research did you do for the novels? What is the oddest bit of information that you found?

Devon:  I've done a lot of research for the novels, not only for the inventions and technologies of the time (and the patents for wilder things that were never built) but also for the politics, the geography, the clothing, the language, and more. I've done my best to be true to the feeling of the time, while still taking care to bend it all into something a touch more fantastic. Oddest fact I stumbled across? While researching how chamber pots were decorated (yes, chamber pots) I found out the South so hated General Butler that they decorated the bottom of their chamber pots with his portrait.

Devon:  I'm not sure I know all the driving forces behind steampunk's rise in popularity. Certainly there is a huge crafters movement behind it, fashion, lifestyle, music, art, and of course, books. I guess the only thing I can speak to with confidence, is why I'm drawn to it. There is a joy in re-envisioning the familiar. In holding onto (or digging up) beautiful and evocative things from the past and breathing them into the now. For me, steampunk is a way to capture an ever-shifting past, to fasten it in place and peer through it at our today, with a nod toward our tomorrow. Steampunk is a fun, creative, curious landscape with a hands-on attitude. It invites fun, creative, curious people to join in with their hands, hearts, and minds to remember, and remake our fantastic old world.

What:  One commenter will win copy of TIN SWIFT, a TIN SWIFT magnet, and a signed TIN SWIFT handmade (by Devon) airship bookmark from the publisher and Devon Monk!  US ONLY

Who and When:  The contest is open to all humans on the planet earth with a US mailing address. Contest ends at 11:59pm US Eastern Time on Thursday, June 28, 2012. Void where prohibited by law. No purchase necessary. You must be 18 years old or older to enter.