Published:
Laurie London's debut novel, Bonded by Blood was released on Tuesday, January 18. Laurie will be stopping by The Qwillery for an interview in March. If you have any questions you'd like me to ask her, leave them in the comments and I may include them in the interview. 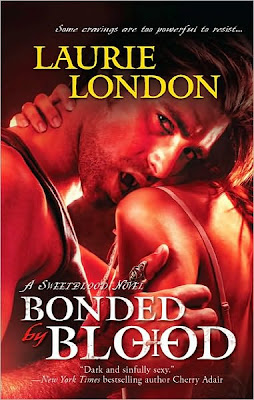 Movie location scout Mackenzie Foster-Shaw has always known that she's cursed to die young. No one can protect her from the evil that has stalked her family for generations—vampires who crave her rare blood type. Until one afternoon in a wooded cemetery, she encounters an impossibly sexy stranger, a man she must trust with her life.
For Dominic, a man haunted by loss, Mackenzie satisfies a primal hunger that torments him—and the bond they share goes beyond heat, beyond love. She alone can supply the strength he needs to claim his revenge. But in doing so, he could destroy her….