Interview with Marshall Ryan Maresca, author of The Thorn of Dentonhill - February 1, 2015

Interview with Marshall Ryan Maresca, author of The Thorn of Dentonhill - February 1, 2015

Published:
Please welcome Marshall Ryan Maresca to The Qwillery as part of the 2015 Debut Author Challenge Interviews. The Thorn of Dentonhill will be published on February 3rd by DAW. 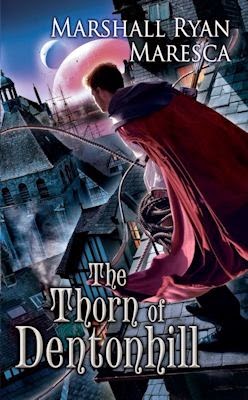 Marshall:  I’ve been drawn to writing from an early age. In seventh grade I tried writing a huge fantasy epic called “The Last Righon”, even though when I started I had no idea what a ‘RIghon’ was or what the significance of the last one meant. But it sounded epic. I couldn’t resist the urge to come up with stories.

Marshall:  Definitely a plotter. I love my outlines. I even worked out a whole structure for them. At one point, early on in my writing attempts, I had a romantic idea of pantsing— it sounds so thrilling! Just go where the writing takes you! I found out it takes me nowhere. I need to have a plan about where I’m going.

Marshall:  Getting myself into the rhythm on a daily basis. On any given day, getting those first hundred words is like starting the car on a frigid day. Once my engine gets warmed up, then the words are flying like arrows at Agincourt.

Marshall:  Early influences include Zilpha Keatly Snyder, David Eddings and Isaac Asimov. I just devoured Asimov as a teenager. Right now I’ve been reading John Scalzi a lot. Plus I have an enormous “too read” pile, especially for genre stuff.

TQ:  Describe The Thorn of Dentonhill in 140 characters or less.

TQ:  Tell us something about The Thorn of Dentonhill that is not in the book description.

Marshall:  There’s plenty of food in Thorn. Magic burns calories, so Veranix is hungry almost all the time. You might want to have snacks nearby when you read it.

TQ:  What inspired you to write The Thorn of Dentonhill? What appealed to you about writing a fantasy novel featuring both organized crime and academia?

Marshall:  It partly came from wanting to take the thief-hero tropes in fantasy and turn them a bit on their ear, and thinking along those lines led me to the superhero tropes, especially the street-level types like Spiderman and Daredevil. And one recurring concept in those tropes is the hero having some grounding, a responsibility that keeps them from just being in hero mode full time. An academic life that couldn’t be ignored felt like the best fit, and from that Veranix came together as a vibrant protagonist that I had to write about.

TQ:  What sort of research did you do for The Thorn of Dentonhill?

Marshall:  I studied cities: how they grow, how they break into neighborhoods, how the people of the neighborhoods define its character. I spent some time in Mexico City, observing those kinds of rhythms. For example, the neighborhood of Coyoacan in Mexico City is a relatively safe district with a lot of historic architecture, where you’ll see groups of young men working the street in a unique way: if you’re trying to park your car, for example, they’ll run ahead, find a spot for you, make sure you get in all right. Things like that: nothing illegal or even shady, just being helpful. And you tip them for their help— help you didn’t necessarily ask for or need, but you tip them just the same. A lot of the character of the Rose Street Princes and other gangs in the Aventil neighborhood came from these observations.

Marshall:  Veranix is the easiest, by far. When I sat down to work on the sequel to Thorn after having been “away” from him for a while (I wrote A Murder of Mages and a few other things after finishing Thorn), writing Veranix again was like putting on a comfortable sweater. Colin is probably the hardest, because he’s got loyalties pulling him in different directions and mixed feelings about Veranix, so finding the balance of what he wants to do, what he needs to do, and what he can’t let himself do is challenging.

TQ:  Which question about your novel do you wish someone would ask? Ask it and answer it!

Marshall:  You mean, what is the correct pronunciation of “Veranix”? I’m glad you asked! (I’ve already heard it mangled several ways.) Veranix has the same vowels and stresses as “therapist”.

TQ:  Give us one or two of your favorite non-spoilery lines from The Thorn of Dentonhill.

“If you ask me, the Blue Hand are especially odious. A little boys club, if you get my drift, and they all nearly worship their leader. Disturbing man. I only met him once, and it was two times too many.”

Delmin leaned in to the prefect. “Listen, what would you rather have, two annoyed, hungry mages, or two mages who owe you a favor?” The prefect thought about this for a minute, and then opened the door.

Marshall:  Next up is A Murder of Mages, which is not a sequel to Thorn, but the start of a separate series also set in the city of Maradaine. The two books do have some interconnectivity, though. A Murder of Mages follows two constabulary inspectors as they try to solve a gruesome series of murders. It’s coming out July 7th.

Marshall:  Thanks for having me! 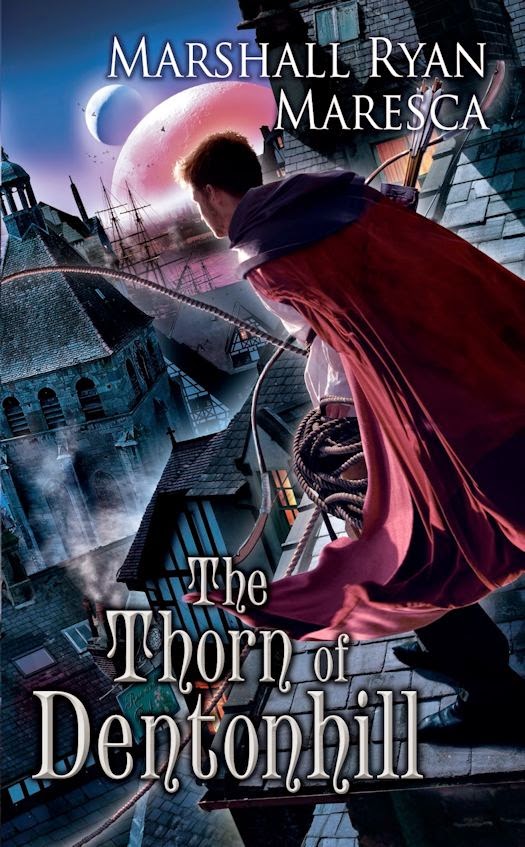 Marshall Ryan Maresca grew up in upstate New York and studied film and video production at Penn State.  He now lives Austin with his wife and son.  His work appeared in Norton Anthology of Hint Fiction and Rick Klaw’s anthology Rayguns Over Texas. He also has had several short plays produced and has worked as a stage actor, a theatrical director and an amateur chef.  The Thorn of Dentonhill is his debut novel. DAW will also be publishing A Murder of Mages, the first novel in Marshall’s second fantasy series, set in the city of Maradaine. For more information, visit Marshall’s website at www.mrmaresca.com.

Report "Interview with Marshall Ryan Maresca, author of The Thorn of Dentonhill - February 1, 2015"