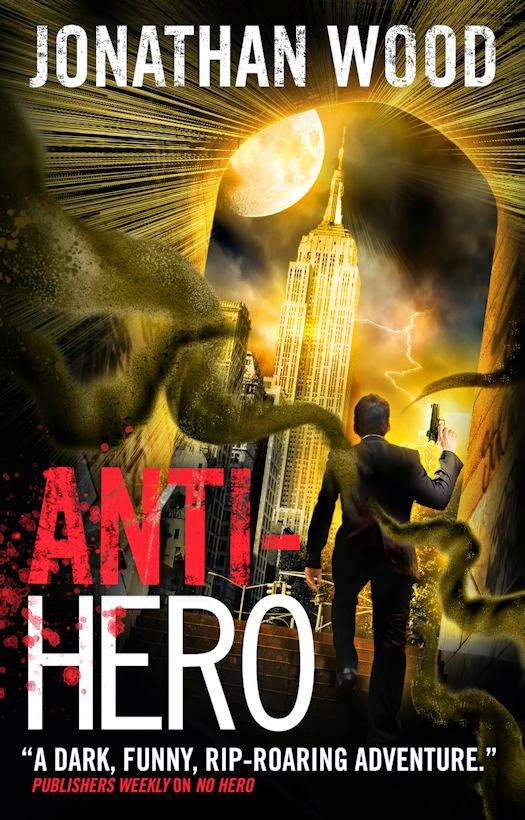 When it rains it pours… monster machines. That attack during a funeral and ruin everyone’s day. MI37—the government department devoted to defending Britain from cosmic horrors—is under siege, so Arthur Wallace and his team must travel to Area 51, ably—and oddly—assisted by Agent Gran. But their travels don’t end there, not when there’s an Arctic town populated entirely by spore zombies and the 2.0 version of Clyde has some funny ideas about how to save the world..

Anyone who has read The Qwillery for a while knows that I am a fan of Jonathan Wood's Arthur Wallace/No Hero series, which starts with No Hero, continues with Yesterday's Hero and fortunately does not conclude with Anti-Hero. (Look for Broken Hero in October 2015).

Anti-Hero starts with the most unusual funeral I've read about in a novel ever. The MI37 team - Arthur, Felicity, Kayla, and Tabitha - are at the funeral for Clyde (well a version of Clyde) when all hell breaks lose. Someone is trying to kill them with extreme prejudice. The team survives the attempt and ends up heading to New York City to help the CIA battle another version of Clyde - a really despicable and evil version who wants to do something really despicable and evil. At the CIA MI37 primarily liaise with Agent Gran, who is very laid back for a CIA agent. The MI37 team and Agent Gran are led on a merry chase from New York to Mexico to a famous US National Monument to deep in the Arctic. The goal - save the world...again! The CIA has some absolutely cool tech that is deployed at various times throughout the novel. The science is often implausible but fun and entertaining. There is magic of course and combined with science it creates a terrible threat to survival of humanity.

In between the insanity that MI37 is dealing with Wood delves deep into the relationships of the MI37 members. There are heartbreaking emotional moments and relationships evolve and change. I was thrilled to see this evolution and changing dynamic among the team. These characters are not perfect - they are flawed, make mistakes, and continue to be believable. Wood puts the team through the wringer both emotionally and physically. There is a lot of soul-searching in Anti-Hero. What does it mean to be a hero is a central theme.

Anti-Hero (like the preceding novels) is absolutely an ensemble piece and is told from Arthur's point of view. Arthur is a very unlikely hero. When he gets in a really tight spot Arthur asks himself "What would Kurt Russell do?" He seems to be moving somewhat away from having to ask that. However, Arthur could not do what he does without the support of the rest of MI37 (all 4 of them). Conversely the team would be much, much less without Arthur. They are an oddball collection who fit together wonderfully - even when they think they don't like each other, when it matters most they pull together and get things done.

Wood has a knack for taking over the top scenarios and making them work beautifully. I would not expect anything less from an Arthur Wallace novel. The writing is crisp and the pacing breathtakingly fast. Tempering all the crazy, all the emotion, all the will they save the world again is just the right amount of humor. There are definitely laugh out loud moments.

Anti-Hero starts off with a bang and has its foot on the accelerator until the nail-biting and extremely satisfying conclusion. It's an action packed Urban Fantasy with more than a touch of weird and a great ensemble cast lead by the very capable Arthur Wallace. Anti-Hero is frightening, fun and fabulous!


Note: While you probably could read Anti-Hero without reading the prior two novels in the series, I suggest you do read them first. 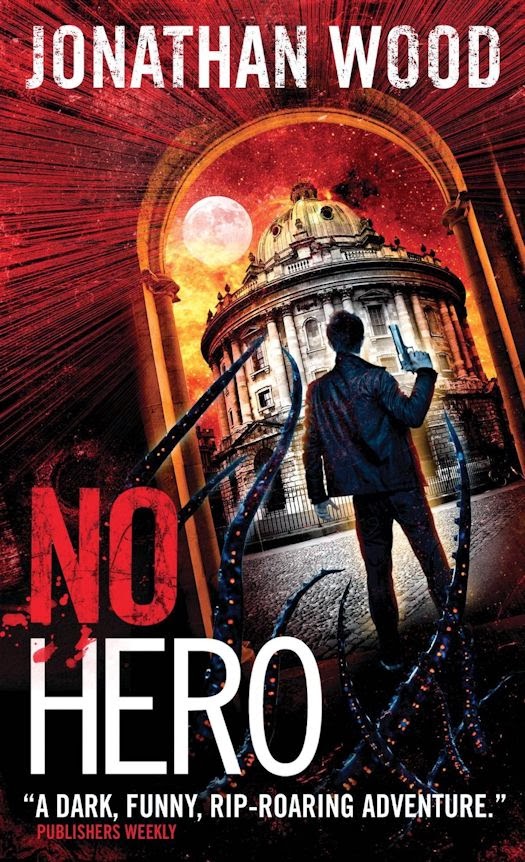 "What would Kurt Russell do?" Oxford police detective Arthur Wallace asks himself that question a lot. Because Arthur is no hero. He's a good cop, but prefers that action and heroics remain on the screen, safely performed by professionals. But then, secretive government agency MI37 comes calling, hoping to recruit Arthur in their struggle against the tentacled horrors from another dimension known as the Progeny. But Arthur is NO HERO! Can an everyman stand against sanity-ripping cosmic horrors? 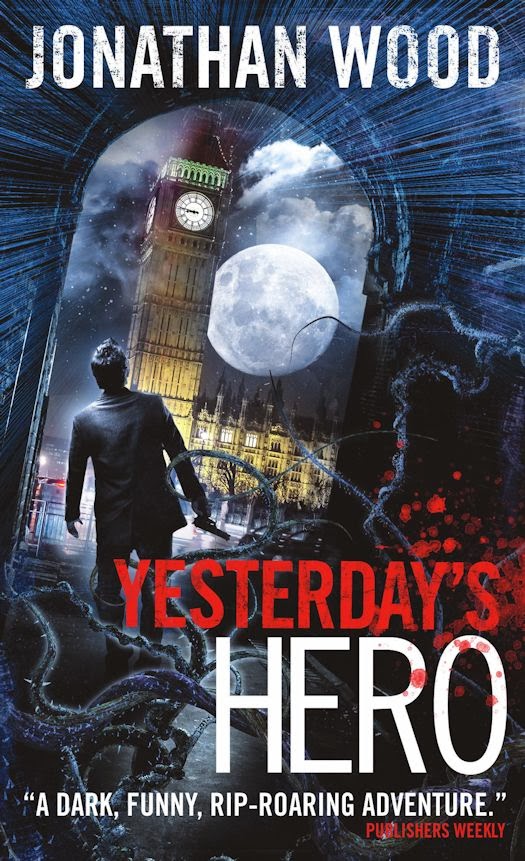 Another day. Another zombie T-Rex to put down. All part of the routine for Arthur Wallace and MI37—the British government department devoted to defending Britain from threats magical, supernatural, extraterrestrial, and generally odd.Except a zombie T-Rex is only the first of the problems about to trample, slavering and roaring, through Arthur’s life. Before he can say, “but didn’t I save the world yesterday?” a new co-director at MI37 is threatening his job, middle-aged Russian cyborg wizards are threatening his life, and his co-workers’ are threatening his sanity.

As Arthur struggles to unravel a plot to re-enact the Chernobyl disaster in England’s capital, he must not only battle foreign wizards but also struggle to keep the trust of his team. Events spiral out of control, friendships fray, and loyalties are tested to their breaking point. 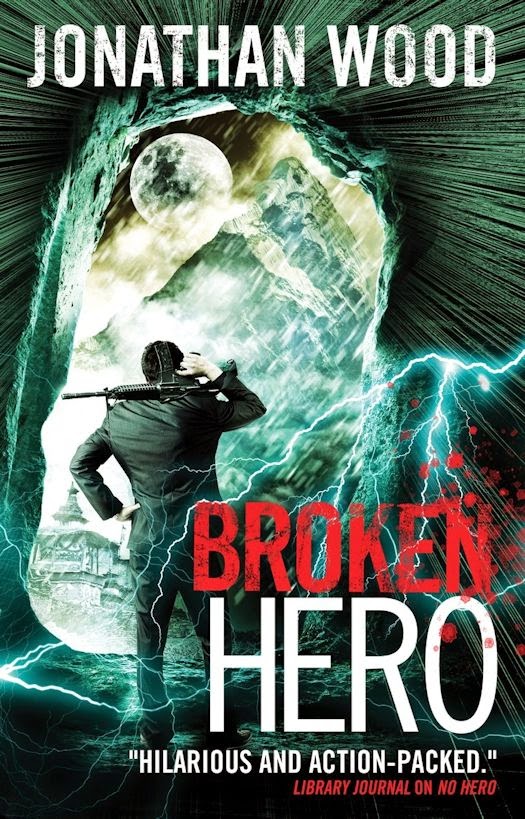 Arthur Wallace and the MI37 team confront their complex personal relationships as well as robots originally created to aid the Nazi’s invasion of Russia, leading to a trip for the team to the Himalayas, which takes them to a Nepalese death cult, then back to London for the final assault – amidst assorted relationship break-ups, hangovers and pregnancy scares…