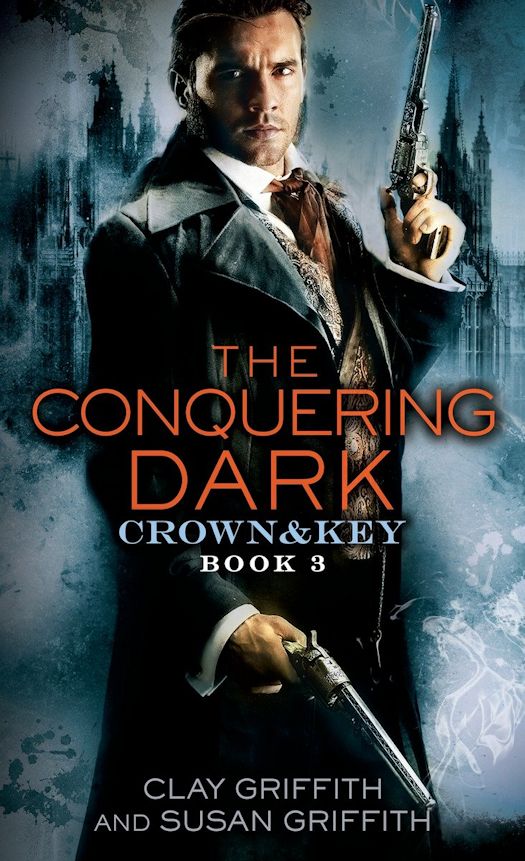 The Conquering Dark is the exciting end to the Crown & Key series. The instalment starts as dramatically as the prior two books with our heroes saving the royal family and a number of aristocrats from certain death from a group of part man/part machine villains. Gaios is determined to get his hands on the Stone of Scone which he believes will give him free reign to destroy Great Britain. What he doesn't realise that between him and certain victory are a magician without any powers, an alchemist, a monster hunter, a maker of gadgets and weapons, a teenage werewolf and a young woman irrevocably changed by an evil doctor. Failure is not an option or everything they know and love will die under the hands of the would be god Gaios.

This instalment is non-stop action from page 1 through to the end. Our motley band of heroes are at a distinct disadvantage when Simon loses his powers towards the end of book number 2 - The Undying Legion. It almost seems impossible that they could prevail when at such a disadvantage. The 'gang' have to play to their individual strengths until such time as Simon can regain his powers, if he ever does. The writing duo continue to fully develop the individual characters while at the same time build the relationships between the characters, and not just the ones with a romance element. Obviously, there is the culmination of the romance between Simon and Kate but we also see Malcolm start to truly care for both the young werewolf Charlotte and there are hints at romance between him and Penny. Simon and Malcolm's relationship changes and Simon faces some hard facts about his long time friend Nick. The Griffiths all but hammered home the importance of friendship through all the books but more-so in this final instalment. This is very much a tale of good versus evil and the power of friendship.

I enjoyed this final instalment but I did find it a tad stereotypical and a bit cliched in parts. The non-stop action, however, made it a more enjoyable read than if it was more conversation based. The romance between Kate and Simon was subtle but quite bland.  Simon was billed in book 1 to be quite the ladies man and rake but he was nothing but a true gentleman to Kate. This made this romance a bit lackluster unfortunately. I much preferred the 'frisson' between Malcolm and Penny and Malcolm's reluctance to like werewolf Charlotte as these interactions seemed more real and true to the individual characters. As a group they had a good dynamic, which along with the overall plot arch made it an enjoyable read overall. I liked this book, I liked the series and LOVED the cover of The Conquering Dark.
Source: qwillery.blogspot.com
+ Sharelabels (7)Flag
AllBook ReviewsClay and Susan GriffithCrown & KeyDel ReyMelanieThe Conquering Darkreview