Published:
The Qwillery is pleased to announce that Isabel Cooper has joined the 2011 Debut Author Challenge. Isabel's debut, No Proper Lady, will be published on September 1, 2011 by Sourcebooks. 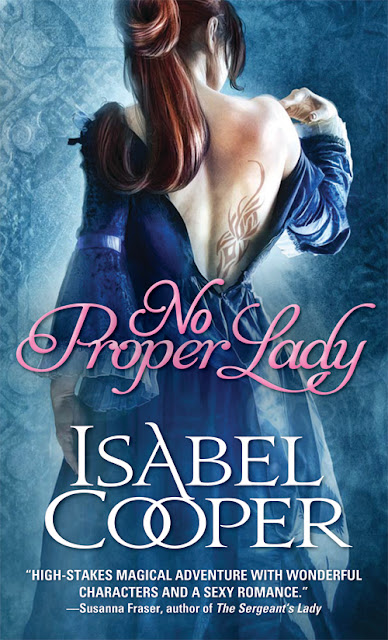 England, 1888. The trees are green, the birds are singing, and no one has any idea that in a few hundred years, demons will destroy it all. Joan plans to keep it that way. All she has to do is take out the dark magician responsible—before he summons the demons in the first place. But as a rough-around-the-edges assassin from that bleak future, she’ll have to learn how to fit into polite Victorian society to get close to her target.

Simon Grenville has his own reasons for wanting to destroy Alex Reynell. The man used to be his best friend—until his practice of the dark arts almost killed Simon’s sister. The beautiful half-naked stranger Simon meets in the woods may be the perfect instrument for his revenge. It will just take a little time to teach her the necessary etiquette and assemble a proper wardrobe. But as each day passes, Simon is less sure he wants Joan anywhere near Reynell. Because no spell in the world will save his future if she isn’t in it.

Look for an interview with Isabel in September.