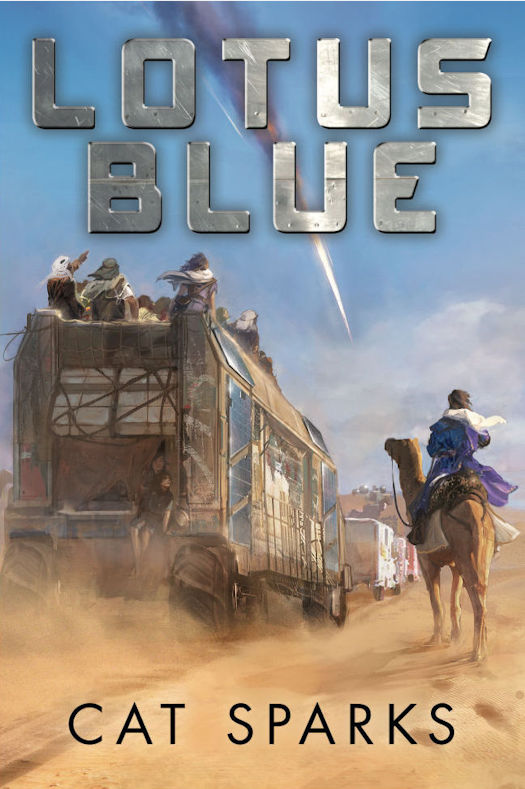 Powerful war machines of the far-future collide across a barren desert world in this post-apocalyptic debut novel from award-winning Australian author Cat Sparks.

Seventeen-year-old Star and her sister Nene are orphans, part of a thirteen-wagon caravan of nomadic traders living hard lives travelling the Sand Road. Their route cuts through a particularly dangerous and unforgiving section of the Dead Red Heart, a war-ravaged desert landscape plagued by rogue semi-sentient machinery and other monsters from a bygone age.

But when the caravan witnesses a relic-Angel satellite unexpectedly crash to Earth, a chain of events begins that sends Star on a journey far away from the life she once knew. Shanghaied upon the sandship Dogwatch, she is forced to cross the Obsidian Sea by Quarrel, an ancient Templar supersoldier. Eventually shipwrecked, Star will have no choice but to place her trust in both thieves and priestesses while coming to terms with the grim reality of her past—and the horror of her unfolding destiny—as the terrible secret her sister had been desperate to protect her from begins to unravel.

Meanwhile, something old and powerful has woken in the desert. A Lotus Blue, deadliest of all the ancient war machines. A warrior with plans of its own, far more significant than a fallen Angel. Plans that do not include the survival of humanity.