Review: Splintered by A. G. Howard

Review: Splintered by A. G. Howard 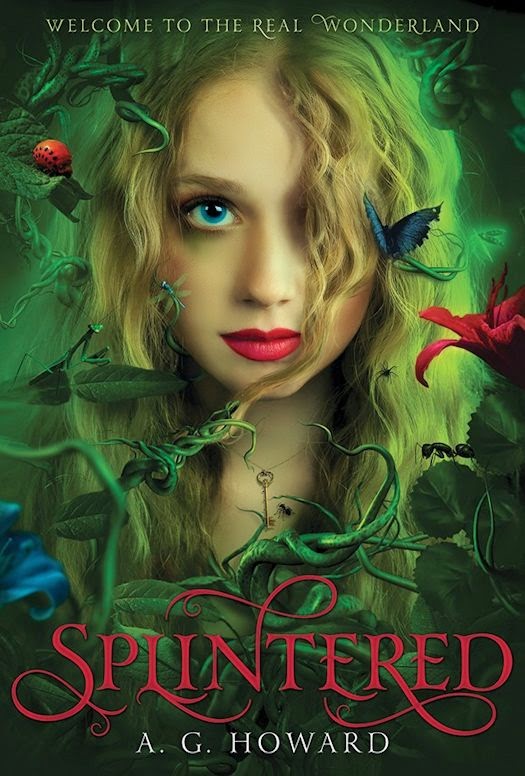 This stunning debut captures the grotesque madness of a mystical under-land, as well as a girl’s pangs of first love and independence. Alyssa Gardner hears the whispers of bugs and flowers—precisely the affliction that landed her mother in a mental hospital years before. This family curse stretches back to her ancestor Alice Liddell, the real-life inspiration for Lewis Carroll’s Alice’s Adventures in Wonderland. Alyssa might be crazy, but she manages to keep it together. For now.
When her mother’s mental health takes a turn for the worse, Alyssa learns that what she thought was fiction is based in terrifying reality. The real Wonderland is a place far darker and more twisted than Lewis Carroll ever let on. There, Alyssa must pass a series of tests, including draining an ocean of Alice’s tears, waking the slumbering tea party, and subduing a vicious bandersnatch, to fix Alice’s mistakes and save her family. She must also decide whom to trust: Jeb, her gorgeous best friend and secret crush, or the sexy but suspicious Morpheus, her guide through Wonderland, who may have dark motives of his own.

Splintered is a dark and twisted take on Wonderland that centers on Alyssa, the original Alice’s great-great-great grand daughter. Alyssa, as with all women of her bloodline, is cursed with the ability to hear the constant whispering of flowers and bugs and her dreams are clouded with nightmares of Wonderland. Alison, her mother, couldn’t bear the strain of Wonderland’s influences and became so dangerous that she was committed to Soul’s Asylum where she will spend the rest of her days. Alyssa desperately wants to spend her senior year in a London exchange program near her best friend, Jeb Holt. Unfortunately, Alison’s mental illness has made Alyssa’s father overprotective of his only child. Banking on Jeb’s help, Alyssa is crushed when Jeb agrees with her dad that she should spend her senior year at home. After a harrowing incident at the asylum involving her mother, Alyssa’s dad makes the heart-wrenching decision to approve electroshock therapy on Alison. A familiar voice in Alyssa’s head tells her there is only way to stop this, and she nobly goes through the “Looking Glass” to try and save her mother. What she didn’t expect was Jeb being summoned by her last wish just before falling down the rabbit hole. In order to return to her world, Alyssa must undo the mistakes that Alice Liddell made all those years ago, and restore the balance in Wonderland. But Wonderland is a much more terrifying place than Lewis Carroll ever wrote about. The two humans trapped in this world of dark fantasy must gather all their bravery and wits to outsmart the denizens of this place who have plans and schemes of their own.

For whatever reason, I’m more interested in reading alternate histories of Lewis Carroll’s Alice in Wonderland than in the original. While browsing through a local bookstore, my attention was captured by this book’s beautiful cover. I picked it up and although I don’t read a ton of YA, its promise of a more sinister Wonderland piqued my interest further and I thought I’d give it a try. Am I glad I did! Splintered is author A.G. Howard’s debut YA novel, published in January of 2013, so I am a bit behind the times, but this actually works out for me because now I don’t have to wait for more in the series to satisfy that endless question: what happens next? The Moth in the Mirror, an E-novella was published in October of 2013, book two, Unhinged, was published January of 2014 and book three, Ensnared, is on bookshelves in January of 2015. Howard’s version of Wonderland is similar to the source material in some ways and totally off the wall in others, which made for an adventure that was fresh but relatable. Her innovations include a moth-like fairy boy (familiar) who Alyssa has known from childhood who becomes part of a love triangle that had me rooting for both suitors. Alyssa has complicated feelings for both Jeb and Morpheus, the Netherling boy, who shared her childhood dreams. She struggles for independence from the men in her life who alternately try too hard to protect her or control her. She is fiercely brave as she learns to fight for herself and her loved ones while accepting the warped reality of Wonderland. Her relationships with Morpheus and Jeb ring true with just the right amount of angst, tenderness, and teen awkwardness. She is a great protagonist. This is a gorgeous gothic fairy tale with the right amounts of romance, adventure, and introspection. Immerse yourself in the lush madness that is Splintered and enjoy the wild ride!
Source: qwillery.blogspot.com
+ Sharelabels (6)Flag
AllA. G. HowardAmuletBook ReviewsSplinteredreviewtrinitytwo