Published:
The Qwillery is thrilled to present the US cover for Binary, ®Evolution 2, by Stephanie Saulter out May 5, 2015 from Jo Fletcher Books: 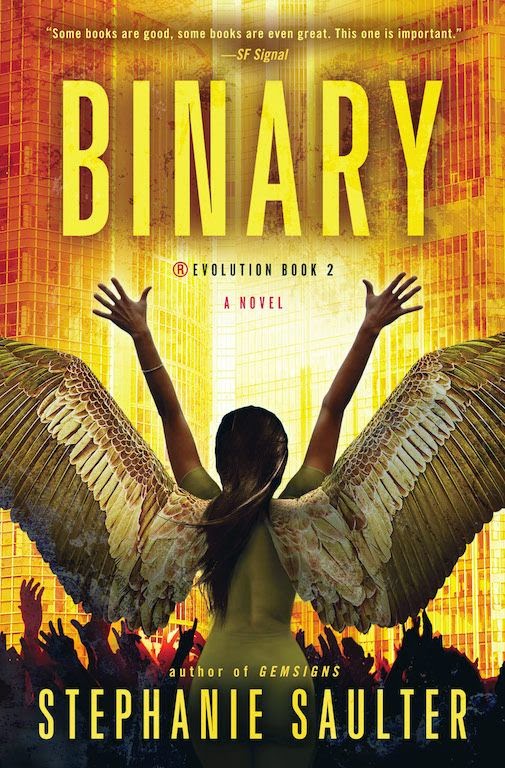 Zavcka Klist has reinvented herself: no longer the ruthless gemtech enforcer determined to keep the gems they created enslaved, she's now all about transparency and sharing the fruits of Bel'Natur's research to help gems and norms alike.

Neither Aryel Morningstar nor Dr. Eli Walker are convinced that Klist or Bel'Natur can have changed so dramatically, but the gems have problems that only a gemtech can solve. In exchange for their help, digital savant Herran agrees to work on Klist's latest project: reviving the science that drove mankind to the brink of extinction.

Then confiscated genestock disappears from a secure government facility, and the more DI Varsi investigates, the closer she comes to the dark heart of Bel'Natur and what Zavcka Klist is really after-not to mention the secrets of Aryel Morningstar's own past...

Eli waited until the room was almost full, with crowds still massed in the aisles, before slipping in as inconspicuously as possible. He was recognizable enough, especially in this crowd, for a few heads to turn, but no one spoke to him as he found a seat near the back, and he did not think he had been spotted by any of the organizing staff. He had no wish to be hailed from the stage by whatever functionary was conducting the Festival’s formal launch, as could very easily happen if they knew he was there.
There was no risk of such notice from the evening’s keynote speaker, but he nevertheless felt an almost juvenile aversion to her discovering that he was in attendance. The terms on which they had last met had not been friendly. Mikal was down in front, among the other city officials, and it amused him to imagine the reaction that facing the giant gem would likely evoke; though doubtless she had been steeling herself since the election to keep her feelings well hidden. Still, this last- minute trailing of a major announcement was a curious development, one which had attracted a flurry of comment from the business newstreams. He could understand Aryel’s desire for a first- person report.
He had glimpsed her as he made his way inside the massive building, fl uttering to earth near the stage that had been erected on the riverwalk’s great park. Greeting Lyriam no doubt, and satisfying herself that all was in readiness for those attending the festivities at his invitation. Disability, either physical or psychological, was virtually unknown among norms but still distressingly common among gems. The older ones in particular had been designed, reared, and trained at a time when such matters barely rated consideration. Even though they had all since been raised to legal equality with norms, ensuring that crippled, disfigured, or dysfunctional gems got the assistance they needed still took a fair amount of coordination and cajoling.
The people here, he thought as he looked around him, were probably about equally divided between those who had fought early and with diligence for those freedoms and support, and others who had clambered aboard the bandwagon but in truth would have slept no less well had the bad old days of gemtech domination never ended. They would not wish for a return to it, not now that their
consciences had been pricked, but there was a malleability about them that the woman he had come to hear would understand well how to manipulate.
Not unlike Aryel.
The thought felt immediately both unworthy— vile, even— and intriguing. Eli picked at it as the program got under way. Aryel too knew how to play people, how to express a perspective and inspire a response. He wondered if the only real difference between the two women was that he happened to share the winged gem’s sense of values.
He quickly decided— some deeply skeptical part of his mind whispered it might be too quickly— that it was more than that. Aryel’s approach was subtle. She used neither brutality nor blackmail; her weapon was an almost preternatural ability to persuade, a manner that was somehow both emotive and calmly rational. What she thought you should do became, after a few moments’ conversation, the only logical thing to do. That intellectual clarity and ability to communicate had put him in her corner. It was how she had hauled her people out of their postemancipation limbo and into the light.
That and her beauty, and the magic of her wings.
He emerged from his reverie in time to applaud the last of a parade of dignitaries. There were a few seconds of bustle before the lights tightened down again to illuminate only the stage. The Festival director reappeared on it, staring owl- like into the gloom of the audience, and gathered up his full pomp to announce that as they were no doubt aware, the chief executive of the Bel’Natur conglomerate would be the final speaker. What was less well- known, he told them, was that Bel’Natur had been early and generous supporters of the Festival, helping to fund much of the launch and the monthlong program of events. He was sure they would all give a very warm welcome to a woman many had heard of but few— unlike himself of course— had been privileged to meet: Zavcka Klist.
As he took to the stage to make his introduction, in the instant after the lights went down, the door through which Eli had entered was pushed open once again. There was a rustle as some latecomer slipped quickly in.
When they did not immediately walk past him on the way to one of the few empty seats, he glanced around. He was astonished to recognize the distinctive profile of Aryel Morningstar against the soft blue glow of exit lights, stepping back against the wall, wings tucked in tight. A murmur started as those on either side of the aisle realized who stood there and he saw her raise a finger sharply to her lips. The murmur died away and she folded her arms, standing still as a stone.

The midsummer sun was still high enough above the horizon to cast a golden glow over the gathering crowds on the riverwalk an hour later. Eli let himself be carried along in the fl ow of people heading toward the park, until he could step aside into a little nook where two ancient chestnut trees sheltered an empty bench. He sank down onto it and tried to think.
Zavcka had wrapped her speech up quickly. The grandee who had introduced her bounced back onstage, grinning widely, and invited questions. Eli wondered if Aryel would stay and challenge or slip away as unobtrusively as she had arrived, but she did neither. Instead she had waited until the lights came up, waited until they touched the wall where she stood and Zavcka Klist’s eyes had focused on her and widened, before she sidestepped quickly to the door and out. By then people were on their feet all over the room and salvos were being fired at the stage.
They ranged predictably from anxious inquiries about safety, to what sorts of products she thought might emerge, to quantifying the economic impact. She had gone straight to Mikal’s raised hand, though, despite knowing that he must be about to ask her to explain precisely what she meant by integrating human gemtech.
Work had already begun, she said, in the pre-Syndrome era, on direct interfaces. But they did not understand enough then about how the brain was structured and how it worked; progress was slow, patchy, and ultimately abandoned.
“We have the answers to those questions now,” she said. “And while we can regret the manner in which much of that knowledge was gained, I don’t think it honors anybody to simply not use it. On the contrary, it seems to me that we have an obligation to turn it into something worthwhile. Much of the original research focused on disability, for example, and working in difficult environments like space. Or underwater. If we can use what we already know to link this,” she pointed to her own head, “directly to this,” and she took a tablet out of the Festival director’s hand and held it up with the same restrained theatricality, “then there are so many problems we can solve.”
She handed the tablet back, her attention still on Mikal. “We’re not talking about new gemtech. But I understand the concerns behind your question, Councillor, and I respect them. It’s a question that should be asked.”
A few seconds of silence then, the audience bemusedly contemplating the unexpected courtesy she was showing to Mikal. Eli could imagine the split- lidded blink with which he filled it, something he thought his friend sometimes did on purpose when he wished to be disconcerting.
“There are many questions that should be asked,” Mikal had replied evenly. “And answered. I look forward to it.”
Eli knew her well enough to recognize the flash of anger in Zavcka Klist’s eyes as she registered the rebuke. A few people seemed to realize that they had missed something, but it sailed too far over the heads of most. Mikal sat back, giving up the floor and watching her weather the torrent.
Now Eli kept an eye on the passing crowd until the giant loomed into view. He raised a hand. Mikal waved back and changed course, navigating to the edge of the fl ow of people so that Eli could fall into step beside him.
“Well,” he said, channeling well- worn irony, “that was interesting.”
Mikal laughed, a gusty tone with an edge of bitterness to it. “Which part? The rebirth of infotech, the recycling of gemtech, or Zavcka Klist being my new best friend?”
“That last one is the killer. Did she speak to you again? I slipped out when it looked like there was going to be mingling. No love lost between us, as you know.”
“I think she would have been nice even to you. She came straight up to me, handshake, congratulations, the whole thing. Said she didn’t think it would have been helpful to get into a technical discussion about neurochemistry from the stage but she didn’t want me to think she was being evasive, they intend to be completely open, blah, blah, blah.”
“Subject to commercial constraints, of course.”
“Of course. Though she did make a point of saying they want to set up a protocol with the regulators to ensure that the protection of intellectual property doesn’t undermine transparency. Quite how you manage that I don’t know, but she’d be very happy for me to help work it out.”
“Blimey. Do you believe her?”
“Do I believe that she wants me on her private stream, or popping by the office? That she mortifies herself nightly over what Bel’Natur did? Over what she allowed to happen to Gabriel, and Callan, and goodness knows how many others? No, no and no. She doesn’t look nearly shredded enough.”
The big man sighed and ran a hand through his hair. It was medium length and a nondescript lightish brown. The modifications he bore were more than sufficient gemsign; his designers had correctly judged that topping them off with a jewel- colored, phosphorescent mane would have been redundant. His double thumbs left twin furrows on either side of his head.
“But is she now genuinely trying to chart a new course? She might be, Eli. She knows they can’t go back to the old days. Innovate or die, as they used to say at Recombin. Infotech has been stagnant for a long time. We are all Syndrome- safe now, gems and norms, even the Remnants. Bel’Natur might be up to exactly what she says they’re up to.”
“You sound like a politician, Mik.”
“Go wash your mouth out. With soap.”