Published:
Please welcome Matt Adams to The Qwillery as part of the 2012 Debut Author Challenge Guest Blogs. I, Crimsonstreak, Matt's debut, will be published in May.

The Super World of False Documents:
Bringing a Superhero World to Life
by Matt Adams
Narrating a book from the first-person perspective has its limitations. Readers see the world only through the eyes of a single narrator. In some ways, the technique is a blast to use because the author has to make sure readers get the sense of other characters. Dialogue is the primary method employed to do this.

Everything else comes straight from the narrator's perspective. His/her prejudices, beliefs, and morality color the actions in the narrative.

While writing my book, I tried to avoid information overload. Yes, my main character has to relate the history of his family and explain certain things about secondary and tertiary characters, but for the most part, he gives readers only what they need to know. Nothing less, nothing more.

This can be a limiting practice.

I wanted to give the sense that the I, Crimsonstreak universe has a long history filled with rich characters. At the same time, supervillains, alien invasions, parallel universes, and other strange phenomena run rampant throughout. To tell the story of Crimsonstreak/Chris Fairborne, I used the character. To tell the story of the I, Crimsonstreak universe, I used a series of false documents ranging from newspaper articles to secret dossiers.

The technique is nothing new, of course. Watchmen, a seminal work of graphic novels and comics, employs multiple false documents ranging from Rorschach's journal to fake magazine ads and the fictional autobiography Under the Hood. One of my favorite authors, Michael Crichton, used this technique to compelling effect in Jurassic Park, which includes fake research papers and abstracts. Other Crichton works, including The Andromeda Strain and Airframe, feature faked charts, diagrams, and papers to help tell the story. The books in George R.R. Martin's A Song of Ice and Fire series come complete with detailed family trees and histories of each of the different “houses” involved in the multi-layered narrative.

The world of superheroes lends itself well to false documents. Heroes are larger than life and in the public eye; surely someone has written an article about the time a group of heroes saved the world. A reporter certainly pounded out an article about a mysterious masked man who saved a woman from some muggers. No doubt wire services circulated articles about an ongoing threat that played out over the world stage during a tumultuous week. Everyday citizens are likely intrigued enough by these strange vigilantes to clamor for posters and magazine pullouts.

I took these ideas and wrote an extensive amount of background material; this is how I tried to do my world building. It also allowed me to take on a different perspective. Trust me; I spent enough time in my hero's head. I found it satisfying to jump into another character's persona through a journal entry or play ace reporter and trace the history of an emerging hero.

Here are a few of the false documents I employ:

Newspaper Articles. Most articles recount past adventures involving the characters in the book. It's a fun way to tell the backstory of the main character's parents. Another major character gets an entire appendix dedicated to telling his rather involved history.

Magazine Features. A couple of magazine feature articles from Dawn Magazine (think Us or People) are sprinkled throughout the appendices. One focuses on the main character and his family in better days. Another profiles a secondary character.

Journal Entries. Mortimer P. Willoughby, the snarky British manservant for the heroic Crusading Comet and his family, absolutely pops off the page. The character has served his superhero family for decades, keeping a detailed journal of the family's triumphs and tragedies.

Character Biographies. Several of the main heroes get full-on hero worship from Dawn Magazine. These brief summaries recollect career highlights and give readers a peek into how the world perceives the various men and woman who try to protect it.

Secret Dossiers. Villain dossiers provide background on both major and minor villains from the book. These are presented as "ripped from the secret files of the Heroic Legion."

I've always enjoyed getting something "extra" with books I'm reading; I'm geeky like that. I love indexes and appendices, little details that make a world seem fully realized. They're not vital to the story, but those who choose to read the extra materials will walk away with a greater sense of something larger and more connected.

Think of it as the extra content on a DVD or Blu-ray; you don't have to watch the director's commentary to enjoy the movie, but the commentary gives you a different understanding of the film and how it was made. That was my goal with this extra material; to give readers something more.

I, Crimsonstreak
Candlemark & Gleam, May 15, 2012
Trade Paperback and eBook 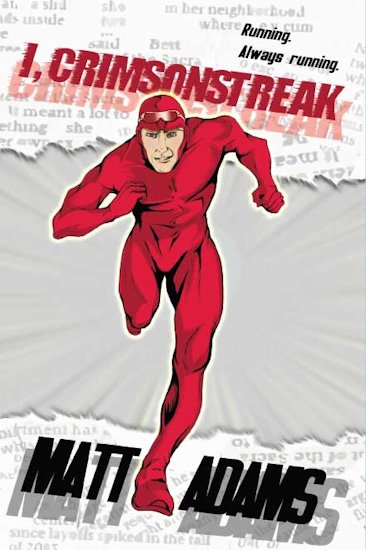 Framed by his father, “reformed” supervillain Colonel Chaos, super-speedster Chris Fairborne, AKA Crimsonstreak, is sent to the Clermont Institution for the Criminally Insane. A hero surrounded by dastardly inmates and heartless guards, Chris struggles to keep his wits about him, until the arrival of some unexpected new “guests” at the facility provides him with a means for escape. Once out, though, he discovers that the world he knew is gone, replaced by a fascist, supposedly utopian state run by none other than Colonel Chaos himself.

With the heroes of the world locked away or fighting in a disorganized resistance, Crimsonstreak teams up with a snarky British butler and a teenage superhero-to-be. Together, the unlikely (and bickering) allies must take down Crimsonstreak’s dad and set the world right. Not easy when your only powers are super-speed and looking good in spandex. But hey, someone’s got to save the world. 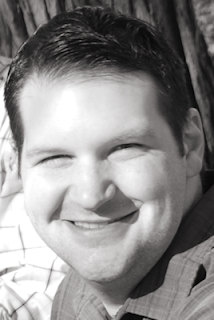 Matt Adams is a former TV news producer whose stories have appeared in Wily Writers Podcast and anthologies from Library of the Living Dead Press and Timid Pirate Publishing. He lives and works in Indianapolis, Indiana, with his wife and (possibly) man-eating frog. Once, long ago, he planned to patrol the streets as Batman, but ultimately decided writing was safer and more cost-effective. He was only half right.

His debut novel I, Crimsonstreak is due out May 15 from Candlemark & Gleam

1 Comments on The Qwillery: Guest Blog by Matt Adams - The Super World of False Documents: Bringing a Superhero World to Life