Published:
Please welcome Emma Sloley to The Qwillery as part of the 2019 Debut Author Challenge Interviews. Disaster's Children is published on November 5, 2019 by Little A. 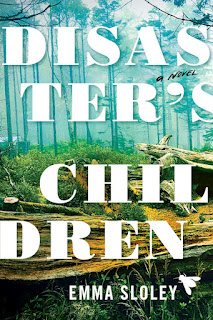 The Qwillery: Welcome to The Qwillery. What is the first piece you remember writing?

Emma Sloley: When I was around 14 I wrote a story about a man who woke up to find he’d turned into an insect, and my high school English Literature teacher read the story out loud to the class and wanted to know if I had been inspired by Kafka’s Metamorphosis. I had literally never heard of Kafka. The moral of the story? We’re all influenced by the masters and the stories that have come before, even if only by osmosis.

ES:  Oh, one hundred percent a plotter. The idea of starting to write a novel without any idea what’s going to happen makes me twitchy. I admire other writers who work that way but it’s definitely more my style to have a plan. I begin by writing fairly detailed outlines in sparse bullet point form, then I go back and fill each beat in with character details, phrases, snatches of dialogue, etc, and I keep adding to it until the outline document eventually gets too unwieldy. Then I know it’s time to start writing.

ES:  I’ve always been very influenced by the writers whose work I admire. The problem with this is I’m highly susceptible to trying on the style or aesthetic of whoever I’m reading at any given time. As I grow and develop as a writer, though, I find myself better able to withstand that unconscious mirroring. Naturally I’m still influenced by other authors, but I’m starting to find my own voice and that is a really thrilling development.

ES:  Doomsday prepping for conflicted millionaires. OR Coming-of-age in the pre-apocalypse (although it’s probably cheating counting compound phrases as one word!)

TQ:  Tell us something about Disaster's Children that is not found in the book description.

ES:  I think readers might be surprised to find that the dystopia heralded by the jacket copy isn’t the kind we’re used to seeing in fiction, in that the world still largely resembles the one we live in. (Of course, there’s an argument to be made that the world we live in is already a dystopia for a lot of people.) The other thing not mentioned in the description is that my protagonist, Marlo, is an adoptee. While that identity doesn’t have a huge impact on the story, it does subtly inform her worldview, especially with respect to the idea that she feels suspended between two worlds and is continually chasing a sense of belonging.

TQ:  What inspired you to write Disaster's Children? What appeals to you about writing dystopian fiction?

ES:  I’ve always loved post-apocalyptic fiction, and I became fascinated with the idea of a world in which the apocalypse hadn’t yet happened, that precarious and loaded moment when change is still possible. I was also drawn to the idea of cults and other cloistered communities that exist on the fringes of society, but I wanted this community to be free of the usual hallmarks of cult life—a bedrock of religious zealotry; a single charismatic leader—and instead be entirely committed to rationalism, democratic decision-making, and secular living.

TQ:  What sort of research did you do for Disaster's Children?

ES:  I read a lot about climate change, obviously, as that is the huge existential threat hanging over the world of my novel. There is a truly depressing amount of material available, unfortunately, outlining the various ways in which the planet is being fucked up, perhaps irrevocably. I also kept reading about various billionaires who were buying up these tracts of land in remote, relatively pristine places like New Zealand as insurance against the coming environmental and humanitarian crises, and that became a fascinating rabbit hole of intel that cemented the decision to have my ranchers be a wealthy, extremely privileged set. The stereotype of doomsday preppers being these paranoid, disenfranchised hillbilly types is starting to feel outdated, and I wanted the book to reflect that subtle shift.

TQ:  Please tell us about the cover for Disaster's Children.

ES:  I adore the cover, which was designed by an incredibly talented artist named Kimberly Glyder. It conveys the precise mood I wanted—a scene depicting the natural world that is both beautiful and unsettling, as if something terrible is lurking just beyond the misty forest. I also love the addition of the little bee next to my name. Bees have a small role to play in the novel, but more broadly, they’ve come to symbolize the extreme peril our natural world is in from pollution, deforestation, and the threat of species extinction, so they are to me a poignant symbol of life’s fragility.

TQ:  In Disaster's Children who was the easiest character to write and why? The hardest and why?

ES:  Kenneth was one of the most fun characters to write. He’s perhaps the most important member of the ranch in that he possesses an incredibly clear vision and has such moral clarity about the urgency of the moment. He’s passionate about building a self-sustaining society and working hard towards that but tortured by the suspicion the other ranchers don’t take the mission as seriously. He’s also unrequitedly in love with Marlo and resentful of Wolf. He’s this wonderful amalgam of virtue and anger, and those contradictory impulses drive every decision he makes. Wolf was more difficult in that he has secrets that could only be revealed gradually, and characters that have an unreliable aspect are always tricky to portray—you want a reader to be intrigued but not frustrated by the gaps in their story.

TQ:  Does Disaster's Children touch on any social issues?

ES:  It’s probably fairly clear to anyone who’s read this far that yes, it absolutely does. Climate change and its attendant crises are an existential threat to both human and non-human life on this planet, and while that is self-evidently terrible, as a narrative theme it’s so rich with possibility. I wanted to explore not only the physical threats but the huge psychological effects that eco-anxiety is having on people, and the various ways in which humans around the world might deal with that. Do we become activists and agitate for change? Do we hide away in our compounds pretending it’s not happening or hoping to survive the worst of it? These are the moral questions at the heart of the story, and I hope they provide a compelling reason to stick around and find out which my characters choose!

TQ:  Which question about Disaster's Children do you wish someone would ask? Ask it and answer it!

ES:  What does the title mean? Well, funny you should ask! The ranchers refer to the outside world as “The Disaster,” and I decided to personify this idea for the title. If Disaster is the parent then the children are all of us, humankind, and the legacy we’re inheriting is a world rapidly becoming uninhabitable. The question at the heart of the story (and any story about families, I suppose) is: will we doom the next generation or save it?

TQ:  Give us one or two of your favorite non-spoilery quotes from Disaster's Children.

ES:  Some things were so beautiful you never got used to them.

“Better to be safe than sorry.” She said it without thinking, but the creaky aphorism sounded suddenly ominous to her ears, as if after all there had only ever been a binary choice between safety and regret.

And all the while the wall grew higher, stone by stone.

ES:  I’m already well into writing my second and third novels. My next novel is about a woman who reluctantly agrees to help run a hotel in upstate New York with her husband only to have a tragedy blow her life apart, while my third is a return to some of the themes I explored in Disaster’s Children—two families return to a devastated coastal town and must learn to live together in the shadow of environmental and emotional catastrophe.

ES:  Thank you so much for inviting me to take part!

Emma Sloley began her career as a features editor at Harper's BAZAAR Australia, where she worked for six years. In 2004, she and her husband made the move to New York. As a freelance travel writer in NYC, she has appeared in many US and international magazines, including Travel + Leisure, Condé Nast Traveler, and New York magazine. She has also published fiction, short fiction, and creative nonfiction in literary publications such as Catapult, The Masters Review Anthology, and Yemassee Journal. Her work has been twice nominated for a Pushcart Prize, and she has received a fellowship from the MacDowell Colony, where she wrote her debut novel, Disaster's Children. Today she divides her time between the United States, Mexico, and various airport lounges. Visit her at www.emmasloley.com.