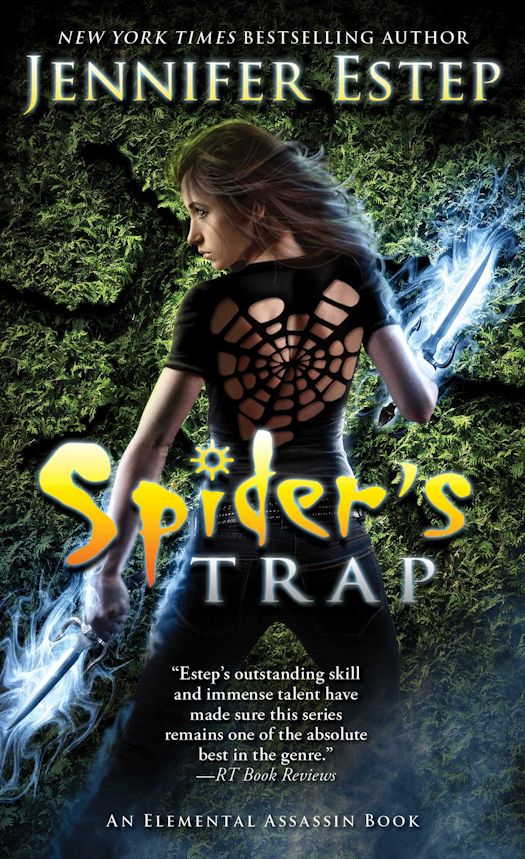 Keep your friends close but your enemies within stabbing distance.


One important lesson I’ve learned in the assassination business is that to be the best you have to roll with the punches. Now that I’m queen of Ashland’s underworld—by default, not by choice—a lot more punches are being thrown my way. But I suppose that’s the price of victory for taking down some of the underworld’s top dogs. Good thing I have my Ice and Stone magic to help me survive my volatile new position. Just when I think things are finally settling down, someone tries to murder me during a hush-hush underworld meeting. But the real surprise is how strangely familiar my shadowy assailant seems to be.

My job is to maintain order among killers, crooks, and thieves, and soon I’m embroiled in a bloody game where the ability to keep secrets could be the greatest superpower of all. My enemies have all sharpened their knives and laid their traps, waiting for me to fall. But this Spider weaves her own webs of death…

Spider’s Trap is the latest thrilling book in Jennifer Estep’s stories about Gin Blanco, assassin extraordinaire. In this novel, Gin has accepted the fact that she is queen of Ashland’s underworld, but she does not have to like it. Trying to negotiate peace between two troublesome kingpins, Gin is almost killed by a bomb – the question is whether the bomb is intended for her or one of the other dangerous thugs in the underworld.

As is usual, Gin has her friends and family to stand by her and assist when things go wrong. As more potentially tragic accidents occur, it become obvious that someone else is being targeted – but why? Gin’s memory keeps telling her there is something she is forgetting, and she returns to her mentor Fletcher’s files to determine who may be responsible before someone is really harmed.

I love all of the Gin novels, not only because of the characterizations, but also oddly enough because of the food descriptions. Gin runs a restaurant for a living and prepares meals at any time to soothe herself and others. Estep never stoops to recipe listing but she provides enough information and description for me to become hungry throughout the story.

I did find the memory loss trick a little trite and unnecessary. After 12 novels, I find it hard to believe that Gin has that bad of a memory that she could forget such a critical time in her assassin training. I felt that Estep could have handled the memory issue a little more in character with Gin herself.

Overall, Gin’s latest adventure fits in well with the rest of her canon. In addition, Estep does a good job setting up the next adversary to come – one which I never would have seen coming!
Source: qwillery.blogspot.com
+ Sharelabels (7)Flag
AllBook ReviewsDoreenElemental AssassinJennifer EstepPocket BooksSpider's Trapreview