Please send your snail mail address to The Qwillery at theqwillery aht gmail daht com so that The Qwillery can send you a MMPB of Happy Hour of the Damned and a cute Zombie Devil Duckie!  Thank you to everyone!

Remember -- Battle of the Network Zombies is out today.

As part of the Save Amanda Feral movement, The Qwillery invited some of Mark Henry’s peers to blurb about him or the Amanda Feral series. Some were entirely speechless, others not so much:


"Mark Henry is a loveable, incorrigible scoundrel who tells the best damn stories about the worst damn people. His vampires, werewolves, zombies, and demons are fundamentally horrible, yet you root for them anyway -- which is truly the mark of a master, in my not-so-humble opinion. The Amanda Feral books are much, much funnier than hell."  ~ Cherie Priest


"If picking best friends from the dead were a team sport, and I was the captain (of course I'd be the captain)--I'd choose Amanda Feral to be on my team. She's like my fashion savvy, fabulous, designer shoe-wearin' twin. Only not... because well, you know, she has that eating people habit I can't seem to break her of. So maybe we're more like fraternal twins than identical..

Ahem... but if I were dead--she'd be my homeslice. Amanda Feral rocks!" ~Dakota Cassidy


"Mark and I are Twitter addicted.On the flight home from Dragon Con 09 we decided to share an online service on our only charged electronic device - my iPod. Well, as you can imagine, it was a twitter blizzard and we got so confused that Mark tweeted as me and I tweeted as him..Things were said by him (as me) that I may never live down (so dirty). Maybe that is a good thing.

It was like the Hanukkah of iPods even though my battery said it was going to shut off it never did..not until we landed...only with Mark Henry can you have Twitter miracles. He's a good friend and mentor...and a dirty dirty perv."  ~Synde Korman, League of Reluctant Adults Moderator


"Mary Henry writes the most filthy-minded, vomit-inducing, mind-exploding zombie fiction you'll ever read. You'll laugh until you pee your pants, but you'll join the rest of us fools who soiled our underwear and ended up on the floor curled into the fetal position. Those weekly visits to the shrink won't stop you from picking up more Amanda Feral adventures, either. Go on, addict, enjoy the crack that is Happy Hour of the Damned. I'll see you in group. (Don't talk about your mother. We all know it's Mark Henry's fault.)" ~Michele Bardsley


“Only Mark Henry can make zombies sexy! Read Amanda Feral or he will send his uberstyilsh, diabolical creations after you!"   ~Molly Harper


"Mark Henry needs to be stopped. He's been brainwashing us with his preternatural mind control skills. Otherwise, how could we possibly find books filled with zombies, fashion and explosive diarrhea jokes funny?

Because of Mark's books, I, myself, have experienced the shame of spontaneous oral incontinence in public. That's why I started a new group called Team Beige. Team Beige is for people who prefer their comedy only mildly amusing and always politically correct. We prefer puns over cutting wit. We prefer political correctness over boundary pushing. And for the love of all that's holy, we never ever enjoy reading about zombie sex. Or sex at all, for that matter.

If you haven't read Mark's books (Happy Hour of the Damned, Road Trip of the Living Dead or the forthcoming Battle of the Network Zombies), I suggest you run out now and buy copies for yourself and all your friends. How else will you be able to fully understand the scope Mark Henry's depravity? Don't hesitate, friends: Team Beige needs you today."  ~Jaye Wells


Finally, a photo of Mark Henry courtesy of Rob Thurman:


The Qwillery is giving away 2 copies of the Mass Market Paperback of Happy Hour of the Damned each with an adorable Zombie Devil Duckie. 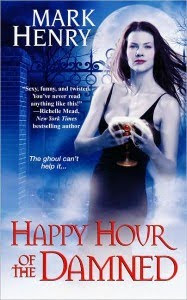 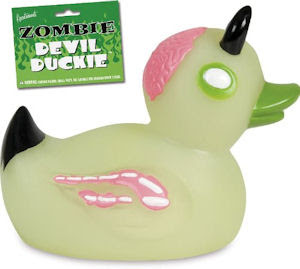 So here is what you have to do to have the chance to win a copy of the novel and a duckie: leave a comment. That’s it. We’ll put all the names in a hat or some other suitable receptacle and pull two out. Ok, we’ll make it more interesting – if you tweet the contest, we’ll put your name in for the tweet as well. You can tweet as much as you like, but it only counts once. If you also mention the contest on Facebook, we’ll add your name again. You can mention it on Facebook a zillion times (which would probably cause everyone to unfriend you), but you only get one extra entry. So you can get your name placed in the receptacle a maximum of 3 times (comment, tweet, FB mention). Provide us a link in the comments so we know that you tweeted or Facebooked.
The contest is open to all humans on the planet earth. Contest ends at 11:59pm Eastern Time on Monday, February 22, 2010.

Happy Hour of the Damned

Road Trip of the Living Dead


You can find Mark Henry at his website and at The League of Reluctant Adults. You can join the Glamazombies (his Yahoo Group) here.

41 Comments on The Qwillery: Save Amanda Feral !!!