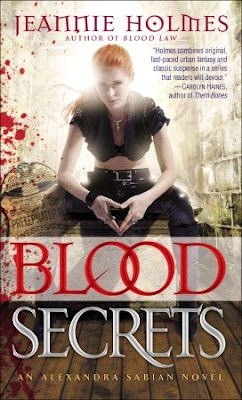 WHEN ALEXANDRA SABIAN SINKS HER TEETH INTO AN INVESTIGATION, SHE DOESN’T LET GO.

Alex allowed a case involving murdered vamps to get personal and is suspended from the Federal Bureau of Preternatural Investigation. Now she’s facing an official inquiry but has a chance to redeem herself. The catch: She must once again work with Varik Baudelaire, her former mentor and ex-fiancé, as he spearheads a search for a missing college student. But Varik has been keeping secrets from Alex, and his mysterious past is on a collision course with his present.

When Alex and Varik discover a carefully handcrafted doll at a crime scene, neither of them can see how close the danger really is or that a killer known as the Dollmaker has made Alex the object of his horrific desire. Now the only way out of the Dollmaker’s lair is through the twilight realm of the Shadowlands, where all secrets—for better or worse—will be revealed.


My thoughts:
Blood Secrets is the second book in the Alexandra Sabian series. It picks up directly after the end of Blood Law.  Alexandra is in trouble in more ways than one. She's up for internal review at the Federal Bureau of Preternatural Investigations (FBPI) for perhaps going rogue. Varik Baudelaire is now in charge of  investigations in Jefferson, Mississippi. Varik and Alex have a history together. It seems like they may be getting back together despite Alex's brother's intense dislike of Varik.

In addition to personal and personnel issues, horrific crimes are being committed.  It's up to Varik to solve the murders. Because of Alex's special talents Varik requests that she be allowed to work the case under his supervision. At the time, no one knows that Alex is firmly in the killer's sights.

Jeannie Holmes writes compelling characters - whether they are good, evil or somewhere in between.  Alex is a complex character. She's got a firm sense of what is right, but will break the rules to pursue what is right. That's what landed her in hot water with the FBPI. She did the right thing, but in the wrong way in Book 1, Blood Law. Now she is dealing with the fallout, while helping Varik investigate the Dollmaker murders.  In Blood Secrets, we find out more and more about Alex's past, about things kept from her that she's yet to find out. I can't wait to see what happens when she does know.

Varik Baudelaire is an alpha male, but with compassion and heart. He's not an over the top alpha. He's someone who is easy to like. Unfortunately, years before he'd promised to keep secrets from Alex. They have a rocky history, but an obvious chemistry. I want Alex and Varik to be together despite their ups and downs. Varik must try to balance his feelings for Alex with his work for the FBPI, which is not easy for him.

While Alex and Varik are very well fleshed out, Jeannie Holmes does not skimp on development of the secondary characters including Alex's mother and brother. Jeannie's especially adept at portraying the in between characters - people who are ethically struggling or are blind to what they are doing because of bigotry (against vampires).  None of the characters in the story are perfect. They all have crossed the line in one way or another - even Alex and Varik. This makes them much more believable.  I'm eagerly looking forward to one of the secondary in between characters getting their comeuppance or coming clean in the following books.

The Dollmaker is creepy and unsettling. I don't think I'll ever look at a doll quite the same way. The plot around him was deftly woven drawing on events from Alex's past. He's pure evil, though even he believes he's doing what he does for a more noble reason.

Blood Secrets is a terrifically written, well paced story that combines Urban Fantasy, Mystery/Suspense, and a touch of Romance. Blood Secrets pulls you in, does not let go and leaves you wanting more.

I recommend that you read the series in order.

Prior books in the Alexandra Sabian series: 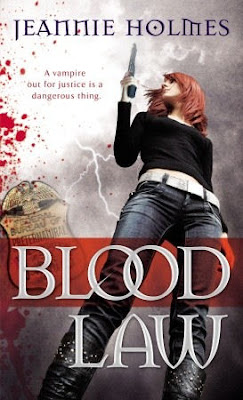 To stop a vampire killer, she’ll have to slay her own demons first.

A provocative and savvy vampire, Alexandra Sabian moves to the sleepy hamlet of Jefferson, Mississippi—population 6,000, half vampires—to escape the demons lurking in her past. As an enforcer for the Federal Bureau of Preternatural Investigations (FBPI), Alex must maintain the uneasy peace between her kind and humans, including Jefferson’s bigoted sheriff, who’d be happy to see all vampires banished from town. Then really dead vamps start turning up—beheaded, crucified, and defanged, the same gruesome manner in which Alex’s father was murdered decades ago. For Alex, the professional has become way too personal.

Things get even more complicated when the FBPI sends in some unnervingly sexy backup: Alex’s onetime mentor, lover, and fiancé, Varik Baudelaire. Still stinging from the betrayal that ended their short-lived engagement, Alex is determined not to give in to the temptation that soon threatens to short-circuit her investigation. But as the vamp body count grows and the public panic level rises, Varik may be Alex’s only hope to stop a relentless killer who’s got his own score to settle and his own bloody past to put right.

Read an excerpt of Blood Law at the Publisher's site by clicking here.