Review: The Undying Legion by Clay Griffith and Susan Griffith

Review: The Undying Legion by Clay Griffith and Susan Griffith 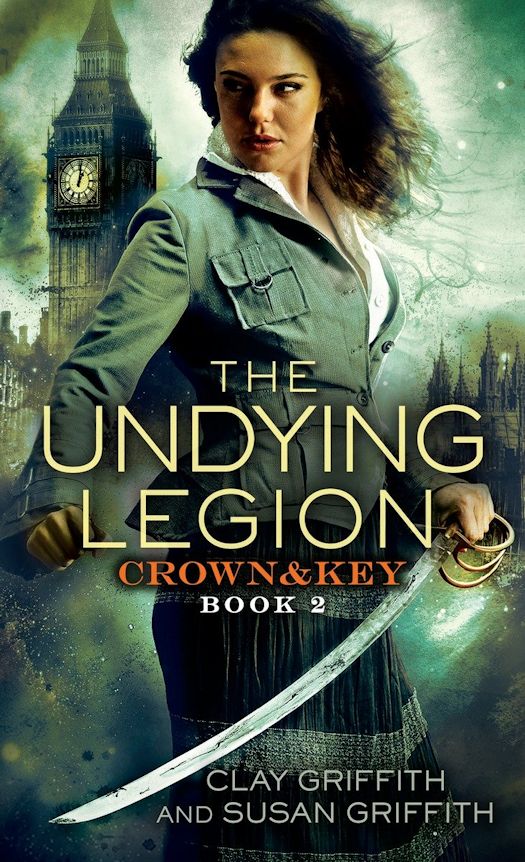 With a flood of dark magic about to engulf Victorian London, can a handful of heroes vanquish a legion of the undead?

When monster-hunter Malcolm MacFarlane comes across the gruesome aftermath of a ritual murder in a London church, he enlists the help of magician-scribe Simon Archer and alchemist extraordinaire Kate Anstruther. Studying the macabre scene, they struggle to understand obscure clues in the ancient Egyptian hieroglyphics carved into the victim’s heart—as well as bizarre mystical allusions to the romantic poetry of William Blake. One thing is clear: Some very potent black magic is at work.

But this human sacrifice is only the first in a series of ritualized slayings. Desperate to save lives while there is still time, Simon, Kate, and Malcolm—along with gadget geek Penny Carter and Charlotte, an adolescent werewolf—track down a necromancer who is reanimating the deceased. As the team battles an unrelenting army of undead, a powerful Egyptian mummy, and monstrous serpentine demons, the necromancer proves an elusive quarry. And when the true purpose of the ritual is revealed, the gifted allies must confront a destructive force that is positively apocalyptic.

The Undying Legion starts not long after the cataclysmic events of book 1. Simon is still living with Kate, Kate is still trying to cure her sister while Malcolm continues to be Malcolm. Everything changes when a young woman is discovered ritually murdered with hieroglyphics carved into her heart. When another dies the same way and the dead start to come to life again there is only one thing for our heroes to do - save the day of course! Boy do our heroes have their work cut out for them as they try to find the necromancer who is reanimating the dead. An ancient evil is loose in London and it won't be long before its undead legion bring about the end of the world.

I really started to enjoy this series with this second instalment. There were three main things that I thought the authors did to really 'add some flesh to the bones' of this series:

1) They start to more fully round out all of the characters and not just the main three - Kate, Simon and Malcolm. We get much more time with Penny who contributes to the 'day saving' with cool weaponry and other gadgets. I feel that she she has turned into a solid secondary character rather than just an extra. There is one quite touching scene between Simon and Penny which I thought was effective in developing both characters. The young lycan Charlotte gets more page time and becomes Malcolm's sidekick (although reluctantly from Malcolm's perspective). Malcolm and Charlotte become quite a good double act. Through both Charlotte and Kate's sister Imogen we get a clearer picture of Kate's true nature as she tries to stabilise Charlotte and cure her sister.

2) The plot keeps the pace from the first few pages all the way to the end. There is a lot happening in this story and the action starts early on. There are fight scenes galore, gory murder scenes, the secret of Simon's key from book 1 is uncovered and something happens to Simon to totally change things for this character. The ending also leaves us with a delightful teaser for book 3.

3) The authors avoid tying up the plot with a nice bow. The Griffith's aren't afraid to have bad things happen to their characters and avoid resolving their issues by the end of the book. There were some scenes with Kate's sister Imogen that had me wishing for something good to happen to this character. Simon is another character who gets both a physical and emotional blow in this instalment.

These three factors make Undying Legion a much more substantial and well-rounded book. There is a lot more happening than just finding the necromancer as the authors start to set up the plot arc with the two super evil demi-gods Ash and Gaios. There were hints of these two villains in the last book but they start to become the focus of the plot and set things in motion that will inevitably be resolved in book 3 - The Conquering Dark which I am really looking forward to reading.
Source: qwillery.blogspot.com
+ Sharelabels (7)Flag
AllBook ReviewsClay and Susan GriffithCrown & KeyDel ReyMelanieThe Undying Legionreview