Published:
Here's another vlog because a few books that I wanteed came out today. Plus there is a giveaway of one of the books along with some bling from the most awesome Cemetery Cat Jewelry!

The Question: What is your favorite cephalopod?
The Goodies: One copy of Blameless by Gail Carriger and The Old Ones necklace from Cemetery Cat Jewelry. 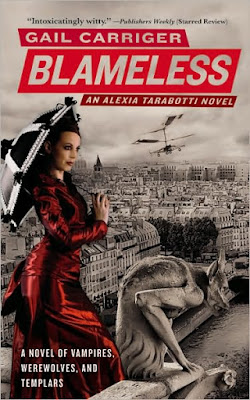 Quitting her husband's house and moving back in with her horrible family, Lady Maccon becomes the scandal of the London season.

Queen Victoria dismisses her from the Shadow Council, and the only person who can explain anything, Lord Akeldama, unexpectedly leaves town. To top it all off, Alexia is attacked by homicidal mechanical ladybugs, indicating, as only ladybugs can, the fact that all of London's vampires are now very much interested in seeing Alexia quite thoroughly dead.

While Lord Maccon elects to get progressively more inebriated and Professor Lyall desperately tries to hold the Woolsey werewolf pack together, Alexia flees England for Italy in search of the mysterious Templars. Only they know enough about the preternatural to explain her increasingly inconvenient condition, but they may be worse than the vampires -- and they're armed with pesto. 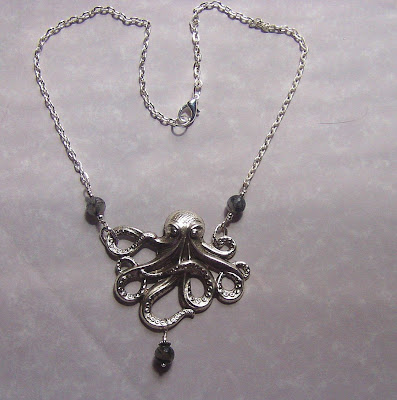 How To Enter: To be entered to win Blameless and The Old Ones: answer The Question.
You can receive additional entries by:
1) Being a Follower of The Qwillery.
2) Mentioning the giveaway on Facebook and/or Twitter. Even if you mention the giveaway on both, you will get only one additional entry. You get only one additional entry even if you mention the giveaway on Facebook and/or Twitter multiple times.
3) Mentioning the giveaway on your on blog or website. It must be your own blog or website; not a website that belongs to someone else or a site where giveaways, contests, etc. are posted.
There are a total of 4 entries you may receive: Answer The Question (1 entry), Follower (+1 entry), Facebook and/or Twitter (+ 1 entry), and personal blog/website mention (+1 entry). This is subject to change again in the future for future giveaways.
Please leave links for Facebook, Twitter, or blog/website mentions. In addition please leave a way to contact you.
The contest is open to all humans on the planet earth with a mailing address. Contest ends at 11:59pm US Eastern Time on Wednesday, September 8, 2010.
Source: qwillery.blogspot.com
+ Sharelabels (7)Flag
AllCemetery Cat JewelryNRWVbooksgiveawayjewelrynew releasesvlog