Published:
Please welcome Craig Cliff to The Qwillery as part of the of the 2017 Debut Author Challenge Interviews. The Mannequin Makers is published on December 12th by Milkweed Editions. 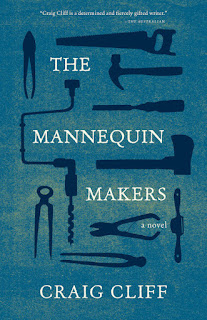 Craig:  Thanks for having me.

I’ve always written. Being alone and making things up — being the boss of the page — was a kind of powertrip. Somewhere between the ages of 16 and 21 I got serious about writing for an audience, though it took at least another five years for maturity caught up to ambition.

Craig:  A total hybrid. I’ve tried both. I have the abandoned manuscripts to prove it.

Nowadays I won’t start writing until I have some sort of schematic that shows how all the elements fit together (for The Mannequin Makers this was a PowerPoint slide with lots of colored boxes and arrows). Something with the shape of the novel, some key events, but still a lot of questions to answer. And once I start, I’m free to go in other directions.

Craig:  With novels, it is sustaining everything -- my energy, the narrative voice, the reader’s interest – over what is usually two or three years of work.

Craig:  I never take off my novelist’s hat, so everything I consume - books, movies, video games, the aggravations of social media – winds up shaping my own work. Even the worst book has some redeeming feature, be it a lesson in what NOT to do, a new way out of an old bind, or a turn of phrase that unlocks something I’d felt but not yet been able to say.

TQ:  Describe The Mannequin Makers in 140 characters or less.

Craig:  A father raises his twins to perform as the perfect mannequins and trump his rival, a former figurehead carver and castaway.

TQ:  Tell us something about The Mannequin Makers that is not found in the book description.

Craig:  Eugen Sandow, the strongman who appears in early on in the novel and whose influence is felt through rest of the story, actually did tour New Zealand in 1902-03, I just made him perform an extra show. He was a fascinating dude. The first body-builder, in many respects. You can watch him flex in one of Thomas Edison’s first films on YouTube.

TQ:  What inspired you to write The Mannequin Makers?

Craig:  I had a bunch of ideas – a father raising his children to be living mannequins, a shipwreck in the Southern Ocean, something centred on Eugen Sandow - that I didn’t know would or could fit together, but they had three things in common. They needed to happen in the past. They seemed so far beyond my own experience and what I’d written previously (a.k.a. A CHALLENGE). And they felt like the sorts of scenarios or characters I’d encountered in the kinds of books I devoured as a kid: Dickens, Verne, Dumas. The more I looked into department stores and clipper ships and physical culture, the more connections I found and the harder it became to not take up the challenge.

TQ:  What sort of research did you do for The Mannequin Makers?

Craig:  I read. A lot. Books on all the stuff I just mentioned (and more), but also a lot of newspapers from the time period, which were thankfully all digitised and searchable online by the time I started. I travelled around the parts of the South Island here in New Zealand, where the novel opens and closes, but I didn’t go to other major settings – Scotland, Sydney, the sub-Antarctic islands - while writing the book. I made do with photos, maps, documentaries, first-hand accounts and my own imagination.
The highlight was being taken behind the scenes at our national museum and getting to touch items from the old castaway depot on Antipodes Island, like the “looter’s suit” that I later dressed one of my characters in.

TQ:  Please tell us about the cover for The Mannequin Makers.

Craig:  Covers are weird. This is the fourth cover for this book. The New Zealand and Australian editions are like a game of spot the difference and there’s a Romanian translation. The US one goes in a very different direction. I like how, once you read about ‘human mannequins’ on the back cover, those tools on the front seem more sinister. That’s kind of how the novel works too: things often appear sinister on second glance.

TQ:  In The Mannequin Makers who was the easiest character to write and why? The hardest and why?

Craig:  The easiest: Avis, who narrates the second part of the novel. For some reason her voice for me clicked early. Perhaps it was all the reading I’d been doing set in that time period. Perhaps it was the diary entry form and/or her extreme ignorance thanks to how she has been raised. After a few days of channelling this sixteen year old female from a hundred years ago, I started to worry it was coming too easily and I was, in fact, writing rubbish. And some of that first rush of words did need to be pared back. But it was still much less work than the other narrators.
The hardest was Eugen, Avis’ brother. He narrates the final section and is looking back on events that took place more than half a century before. He’s changed a lot since then (for starters: he’s learnt to read and write) but he hasn’t changed in other ways as well. It took a long time before I felt he was really talking when I saw his words on my screen.

Craig:  Any novel worth its salt has something to say about the time in which it is written. So even though the setting is historical, The Mannequin Makers talks about the place of art and artistry within a capitalist society, the dynamics of power and the power of empathy – issues and ideas that are still pressing today.

You can also read it as a manual in how not to raise your kids.

TQ:  Which question about The Mannequin Makers do you wish someone would ask? Ask it and answer it!

Craig:  Q: You liveblogged the day you attempted to write at least 6,376 words on the novel’s first draft. How much of those words made it into the final book? Would you ever do it again?

A: Quite a lot survived, actually. Maybe 75%? It’s not like I wrote a large but terrible scene that had to be cut the next day. Would I spend 16 hours straight while writing a first draft again? No way. It took me a week to recover. Better to write 1,000 good words every day until the end!

TQ:  Give us one or two of your favorite non-spoilery quotes from The Mannequin Makers.

Craig:  Since I mentioned my struggles to get Eugen’s voice right, how about the first few sentences from his section, to show what he ended up sounding like?

‘Every winter I’m surprised when the wattle blooms. This year even more so for the battering we took in May and June. But somehow the buds clung to their branches as the easterlies clobbered the coast and our waves, shunted on by the king tide, gouged the beach from Collaroy baths to North Narrabeen.’

Craig:  I’m working on a novel about fatherhood, Hollywood and a levitating Franciscan friar. It’s set in 2017 and 2019, but dips back into the seventeenth century, when San Giuseppe da Copertino was doing his thing.

Excitement is rare in the small town of Marumaru, New Zealand. So when a young Maori man arrives on the morning train one day in 1903—announcing the imminent visit of a famous strongman—the entire town turns out to greet him, save one. Colton Kemp, a department store window-dresser, is at home, watching his beloved wife die in premature childbirth. Tormented by grief, he hatches a plan to make his name and thwart his rival, the silent and gifted Carpenter: over the next sixteen years he will raise his newborn twins in secrecy and isolation, to become human mannequins in the world’s most lifelike window display.

From this moment of calamity emerges a work of masterful storytelling, at once wildly entertaining and formally ambitious. The novel leaps fearlessly from the epistolary to the castaway narrative to the picaresque, as Kemp’s plot goes awry and as he, his children, and the Carpenter converge in the New Zealand hinterland.

The Mannequin Makers is an adventure-filled and thoroughly delightful yarn, introducing one of international literature’s most promising young talents to American audiences. 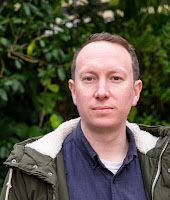 Craig Cliff is the author of The Mannequin Makers, a novel, and A Man Melting, a collection of short stories, which won the 2011 Commonwealth Writers’ Prize for Best First Book. Both were previously published in New Zealand. In 2012 he was a judge for the inaugural Commonwealth Story Prize, and he is the recipient of a Robert Burns Fellowship at the University of Otago. He writes a column for the Dominion Post about his double life as a writer and public servant in Wellington, New Zealand.

Report "Interview with Craig Cliff, Author of The Mannequin Makers"