Reviews: The Enceladus Crisis and The Gravity of the Affair by Michael J. Martinez

Reviews: The Enceladus Crisis and The Gravity of the Affair by Michael J. Martinez 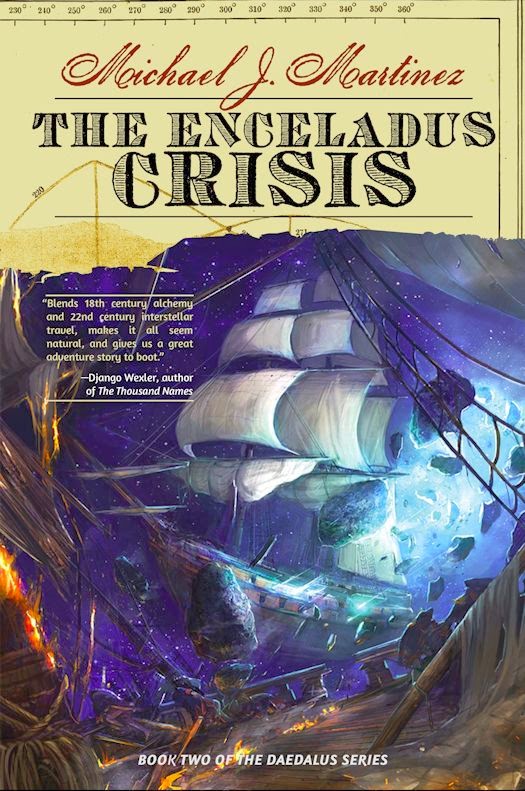 I was truly looking forward to this book’s release because I was heavily invested in the characters, and I absolutely loved the meshing of the two timelines: Historical Fiction meets Science Fiction = Fantastic Fiction. However, I wasn’t prepared for Martinez to immediately blast his readers with a startling and thoroughly exciting opener. Meeting Napoleon, albeit briefly, was so cool and unexpected; it snagged me, hook, line and sinker. Book Two revs up the intensity and action a few notches, and it transformed my perception from a fun read to a book I couldn’t put down. There is so much going on here between the alternate histories, different planets, and four separate plotlines that it should have become confusing, but Martinez, expertly conducts his storylines to create an exciting and brilliant symphony of action.

Definitely put The Enceladus Crisis on your summer reading list, but make sure to read The Daedalus Incident first. (my review here) It lays the foundation and sets the stage for what’s to come. Daedalus puts you in on the ground floor of the story’s technology, and allows readers time to grow fond of its characters. Then for good measure, add the novella, The Gravity of the Affair (see review below) to your list too. The Enceladus Crisis will complete your reading pleasure and packs an astounding wallop of adrenaline. This is a smart, well-written and outstanding series; no sophomore slump here, Book Two is even more exciting than the first one. 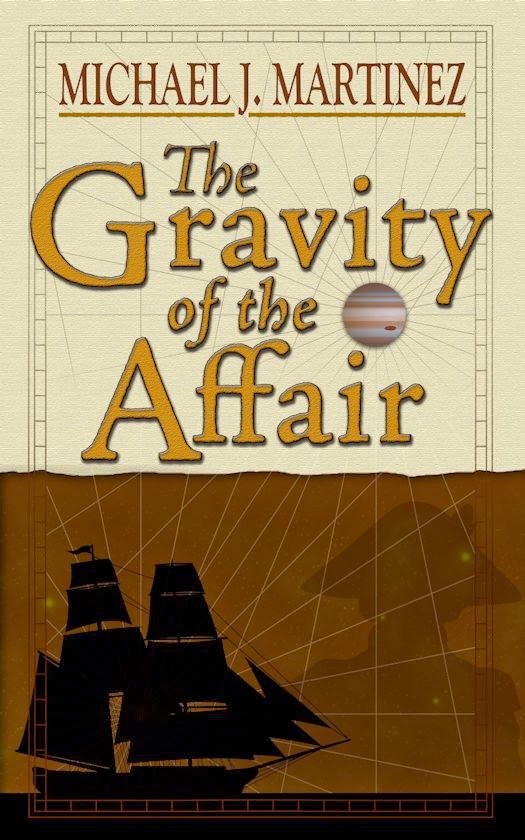 Before his victory at the Nile.

Before his scandalous personal life made headlines.

Before he crushed the French and Spanish fleets at Trafalgar.

Before he died a martyr.

Horatio Nelson, England’s greatest naval hero, assumed his first command, the 12-gun brig HMS Badger, at the tender age of 20. History tells us his first voyages as captain were unremarkable. Yet in the Known Worlds, where sailing ships ply the Void and the mystic science of alchemy works wonders, Nelson’s first command goes quite differently. With his brashness and emotions untempered by experience, Nelson’s rash actions as captain of the Badger threaten his heroic destiny.

The Gravity of the Affair is a novella set in the Known Worlds of The Daedalus Incident, with events that tie into the novel (though both works may be enjoyed independently of one another).

The year is 1779 and a young Horatio Nelson is the commander of the HMS Badger, a small sailing brig assigned to patrol the Void in author Michael J. Martinez’s alternate universe, the Known Worlds. A pirate frigate raids a settlement where the Badger is laying over, steals precious goods, and presses into service some of the locals. Nelson decides to pursue and eventually engage the vessel, with disastrous results. The Gravity of the Affair is the account of the Board of Inquiry investigating Nelson’s decision to pursue the larger and more powerful vessel, and his thoughts and motivations behind this fateful act. It’s an excellent companion to Martinez’s series and gives readers a glimpse into events that shaped Nelson’s destiny before he became renowned as Britain’s most heroic sailor. I read this novella in between The Daedalus Incident and The Enceladus Crisis and it happily filled a void for me while waiting for Book Two to be published. I must admit, I didn’t care for Horatio Nelson overmuch; he’s too pompous. But the author’s depiction of this historical figure rings true and I did enjoy learning of the events that shaped the young naval commander. While it isn't required reading to enjoy the rest of the series, this novella gives insight concerning Nelson's cameo in The Enceladus Crisis, and adds yet another layer of back story to the rich alternate universe.

Report "Reviews: The Enceladus Crisis and The Gravity of the Affair by Michael J. Martinez"