Published:
Please welcome Lexi George to The Qwillery as part of the 2011 Debut Author Challenge interviews.

Lexi:  I guess my lack of them. I don’t wear a different hat for each character, or listen to music when I write, or burn a candle. Come to think of it, I’m pretty boring in that respect. I do require quiet to write—I have the concentration span of a gnat—and I start each writing session the same way. I always go back and read the previous chapter I’ve written to put myself in ‘the mood,’ and to try and remember where I was when I stopped. Also, I am a linear writer. I’m like a plow horse with my head down until I reach the end of the furrow. I don’t jump around from scene to scene. Wish I could! It would make it easier when I get stuck.

Lexi:  I fell in love with romance at the age of 13, when I discovered Georgette Heyer. She is a definite influence, even though I don’t write regency. Love her sly humor and quirky characters. I also love Jayne Ann Krentz in all of her various manifestations. Loretta Chase’s Lord of Scoundrels had a huge impact on me. She makes me sigh. I also love the Carpathians in Christine Feehan’s books; fell in love with the concept that they can’t see colors until they meet their lifemate. I loosely patterned the Dalvahni after them, in the sense that they are humorless and emotionless . . . until they meet the right gal.

I’m also a big fan of the Stephanie Plum novels by Janet Evanovich. Love her zaniness. She makes me laugh out loud. Charlaine Harris is another favorite. The Sookie Stackhouse novels—genius!
And I am something of a fantasy nerd. Lord of the Rings is high on my list, as well as The Belgariad by David Eddings. Those books definitely influenced my tendency to write about an ensemble of characters. I’ve read all the Harry Potter books multiple times. I’m a huge HP nerd.

Lexi:  I am a pantser with plotter envy. I start with the hero and heroine and the basic premise of the story—small town girl meets sexy demon hunter in pursuit of a rogue demon, chaos to follow. I usually knock out 50 or so pages to get a feel for my characters and then I get nervous and sit down and come up with a list of plot points. After that, I wing it for a while and try to connect the dots. About three-fourths of the way through, I sit down and sketch out the remaining chapters to make sure I get everything in and so I know how it’s going to end.

TQ:  Describe Demon Hunting in Dixie in 140 characters or less.

Lexi:  Sparks fly and worlds collide when a feisty, small-town florist is saved by a sexy demon hunter in pursuit of a rogue demon.

TQ:  What inspired you to write Demon Hunting in Dixie?

Lexi:  Rejection! After three years of trying in vain to get a fantasy romance published, I finally realized the universe was telling me loud and clear that it was not the time for that book. Since I love romance, I decided to try my hand at it. A member of my writing group sent me a link to an online romance group that was offering feedback on the first chapter of a paranormal romance. I decided to give it a shot and the book grew from there.

TQ:  What sort of research did you do?

Lexi:  I did some research on medieval clothing and weapons for my demon hunters, and I had to do research on flowers, since Addy is a florist. The rest was pretty organic, since the story is set in a small town (like my hometown) and peopled with zany Southern characters. One of the hardest things for me is dressing my characters! I do a lot of browsing on the internet to get clothing ideas.

TQ:  How did you come up with "Dalvahni" as a name for the inter-dimensional demon-hunters?

Lexi:  I totally made it up! Played around with the sound of different words until I found something I liked. Then I checked it out on the web to make sure it didn’t mean something rude in another language.

Lexi:  I loved writing the weenie in the bag scene!

Lexi:  Addy, my heroine, came easily to me, for some reason. She is a born rule breaker who has reined in her impulses to please her mama, but she has a wild and stubborn streak. She responds to stress and danger by being a smartass, and that was such fun to write.

Her friend, Evie, was a little tougher, because she is so shy and inhibited.

It was also fun to switch POVs. Brand is an alpha male from another dimension who hasn’t been to Earth since the Middle Ages. So the writing in his POV is more formal and flowery. Then, in Addy’s POV, I got to be funny and outrageous. Loved that mixture of styles.

Lexi:  Thanks for asking! I have a novella that is coming out in August from Kensington as part of a Halloween anthology called So I Married A Demon Slayer. I am very excited to be in the anthology with the awesome and fabulous Angie Fox and Kathy Love. The name of my novella is "The Bride Wore Demon Dust," and it’s also set in Hannah, the small town featured in the first book. A warrior, a demon, and the girl next door…

Addy Corwin is a florist with an attitude. A bad attitude, or so her mama says, ‘cause she’s not looking for a man. Mama’s wrong. Addy has looked. There’s just not much to choose from in Hannah, her small Alabama hometown. Until Brand Dalvahni shows up, a supernaturally sexy, breathtakingly well-built hunk of a warrior from—well, not from around here, that’s for sure. Mama thinks he might be European or maybe even a Yankee. Brand says he’s from another dimension.

Addy couldn’t care less where he’s from. He’s gorgeous. Serious muscles. Disturbing green eyes. Brand really gets her going. Too bad he’s a whack job. Says he’s come to rescue her from a demon. Puh-lease. But right after Brand shows up, strange things start to happen. Dogs talk and reanimated corpses stalk the quite streets of Hannah. Her mortal enemy Meredith, otherwise known as the Death Starr, breaks out in a severe and inexplicable case of butt boils. Addy might not know what’s going on, but she definitely wants a certain sexy demon hunter by her side when it all goes down… 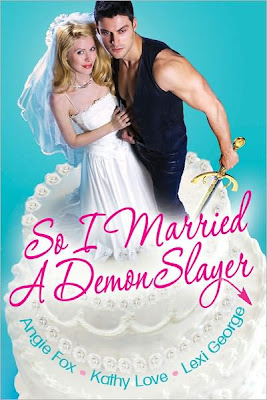 In the lusty humidity of the Deep South, among the neon lights of Vegas, and the glitz of high-fashion, demon slayers are the new sexy…

At Hot! Magazine, the devil really does wear Prada. When the CEO is an actual demon and the mail room guys are undercover demon slayers, it’s not beyond the realm of possibility for an up-and-coming photographer and a model possessed by much more than a sweet tooth to fall in love.

When a sexy succubus comes up against a fearless demon slayer intent on killing her boss, a truly wild Vegas night turns into a quickie wedding. But in a city where anything goes, a demon slayer wedding a succubus is strictly forbidden. Which doesn’t mean either is rushing to jump out of the marriage bed.

He’s perfection in a tuxedo—more so out of it—and on a mission to protect his Alabama gal from the mysterious mayhem intent on her destruction. But the bride is a spunky steel magnolia with special powers of her own, determined to drop-kick evil forces across the state line and give her slayer a run for his money. 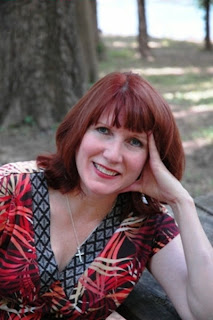 Lexi George is an appellate lawyer by day and a romance writer by night. She started her writing career in the third grade penning bad poetry about hydrangea bushes and Erik the Red. Ironically, she ended up marrying a Viking, a Northern boy who came to Alabama with the Air Force and stayed.

She wrote poetry all through high school and college. And then she decided to go to law school and the muse left in a huff. The muse hated law school.

The muse returned when Lexi’s oldest child was a toddler and Lexi has been writing ever since. After piling up an impressive number of rejections on her first book, a fantasy romance that she worked on for more than ten years, Lexi decided to try her hand at something else. The result was Demon Hunting in Dixie, a paranormal romance about demon hunters in the Deep South.
The muse is very happy, and so is Lexi.

Demons or Demon Slayers?
Please remember - if you don't answer the question your entry will not be counted.

Who and When: The contest is open to all humans on the planet earth with a mailing address. Contest ends at 11:59pm US Eastern Time on Wednesday, May 11, 2011. Void where prohibited by law.

53 Comments on The Qwillery: Interview with Lexi George and Giveaway - May 4, 2011