Steven:  In my writing, I suppose a quirk would be suddenly dropping things into the prose, often before I’m fully conscious of my intent to do so. There is something of a constant internal battle going on while I write, the line of battle shifting between the words that move the plot forward with the words that express a view or conviction I hold or make a point I find interesting – finding instances when I can sneak things in that elevate the work without being obvious is a great pleasure, but I often find myself shaking my head and deleting lines with a rueful smile.

Another way to answer that question would be that I often affect accents or speech patterns and even physical mannerisms of the character whose dialogue or thoughts I am writing. I’ll even stand up and walk around the room working through the words. Luckily I work alone, because it’s gotta look reeeeaaaal strange.

Steven:  Softball answer: Henry Miller – his lurid prose and searing honesty taught me what writing can be (if you are not a coward, that is. Working on it.)

Still pretty softball answer: Hemmingway. I mean… it’s Hemmingway. Sure it made me feel cool to hold up his books during my high school years, but every time I return I am still impressed.

Hardball… or… baseball answer? Not baseball. I don’t know, anyway, third person, also a softball answer, it’s easier this way: Vonnegut. You can read his books so quickly and they’re so strange but pleasurable. It’s like eating soup. Great soup, sure. But it’s still soup, still very easy to eat.

Steven:  Um… a pantser is.... What’s a pantser? And plotter like Guy Fawkes or like someone who plans out their book’s plot…?

Keeping my ass in the chair, if I may use the word chair. I am constantly finding distractions throughout the first two thirds of every novel (or other project) I write. By the end I start to cruise and then it is often hard for me to get out of the writing chair, but man, mowing the grass or going to the grocery store sure is appealing while I’m still in those first tens of thousands of words.

Steven:  A lonely man, a lonely place: a city enshrouded by mist. And mystery. He gets pulled into it all, the why and what. And it pulls him down.

TQ:  What inspired you to write Three A.M.?

Steven:  I wish I knew/remembered. I had a vision of the setting and an idea for a character. It was supposed to be a short story. Then I thought of a longer story and pretty soon it was clear it would need to be a book.

TQ: What sort of research did you do for Three A.M.?

Steven:  Cursory, at best. One of the greatest delights of writing about a world different than our everyday home is that you can fill it with things beyond the normal reference points people use; you don’t have to cleave to reality. That said, there are elements of the book that did require some study. I know a bit more about hydroelectric dams now, for example.

Steven:  Tom Heller, one of the most prominent secondary characters. He was easy to write because he was based directly off of a real person (or two). The hardest character to write was probably John Watley, because I had to struggle to keep him from seeming like an archetype. It would have been much easier to just throw in a cackling laugh and place a Persian cat on his lap, but that would have been awful, awful writing.

TQ:  Without giving anything away, what is/are your favorite scene(s) in Three A.M.?

Steven:  It is a any number of scenes in which the protagonist reveals what his world is like – those times when he stumbles (and rambles) through the misty streets, when through his often hazy mind and garbled convictions we see how he and everyone around him is living.

Steven:  My second novel is finished and in the hands of the Powers that Be. I am working on the third and it is going well: I love the characters and am intrigued to see how twisted and wound about the story will end up, but I am still definitely in that “Keep your ass in the seat, Steve!” phase. And lots of other wacky projects I always have simmering on the back burners.

Steven:  That’s not a question, but you’re quite welcome and thank you. 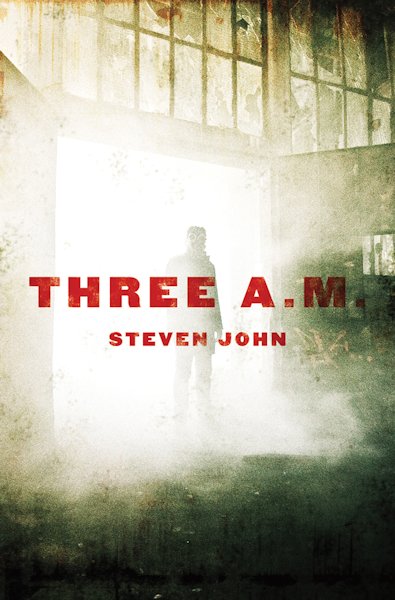 Fifteen years of mist. So thick the streets fade off into nothing. So thick the past is hazy at best. The line between right and wrong has long been blurred, especially for Thomas Vale.

Long gone are the days when new beginnings seemed possible—when he was a new recruit, off to a new start fresh in the army. He had hoped to never look back. Not like there was much to see, anyway.

Thomas Vale can hardly fathom why he keeps waking up in the morning. For a few more days spent stumbling along? Another night drinking alone? Another hour keeping the shadows at bay…. 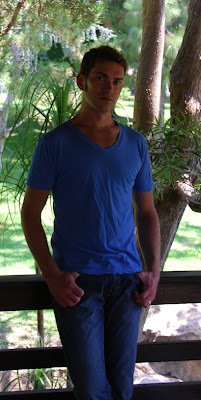 Steven John and his wife, an elementary school teacher, live in Los Angeles by way of Washington D.C. and New York, respectively. He splits his time between many things, most of which involve words. Three A.M. is his first novel.

What:  One commenter will win a hardcover copy of Three A.M.

What are some of your favorite dystopian or noir novels?
Please remember - if you don't answer the question your entry will not be counted.

Who and When:  The contest is open to all humans on the planet earth with a mailing address. Contest ends at 11:59pm US Eastern Time on Tuesday,  April 3, 2012. Void where prohibited by law. No purchase necessary. You must be 18 years old or older to enter.

16 Comments on The Qwillery: Interview with Steven John and Giveaway - March 27, 2012