Published:
Please welcome Nick Cutter to The Qwillery. The Acolyte was published by ChiZine Publications in May 2015. 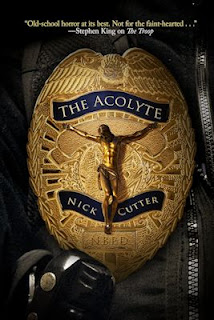 TQ:  Welcome to The Qwillery. What is the most challenging thing for you about writing? Are you a plotter, panster or a hybrid of the two?

Nick:  I think trying to keep up my production with a new family. A son, love him to death though I do, makes it tough to write as much as I used to. I was always used to writing 6, often 7 days a week. Now it's 5, if I'm lucky. Weekends are spent with the family. And if my son gets sick or we have something planned, of course he comes first. So it's a new challenge. I'm a pantser. I know plotters, I see people having great success with it. For me … maybe it's symptomatic of a scattered mind, but I don't think I'd be able to follow an outline even if I diligently wrote one!

Nick:  I think The Acolyte deals with more real-life fears—the first two books deal with our primal fears, I'd say, but there's a fantastical aspect to them in that they couldn't actually happen. Not that I think the events in The Acolyte are likely to happen, either, but the fears there are more having to do with religious intolerance, religious terror in a way, man's inhumanity to man, and as such it feels more of a "real world" book in that I'm trying to comment at least a little on present-day events and what scares me when I look at the world around me.

TQ:  Please describe The Acolyte in 140 characters or less.

Nick:  The church has become the state. A task force, The Acolytes, are entrusted with stamping out all base faiths. (is that too many characters?)

TQ:  Please tell us something about The Acolyte that is not found in the book description.

Nick:  There's a love story buried in there. You might have to look to find it, but by gar it's there!

Nick:  I'd say a lot of them were difficult, for different reasons. I think primarily, one thing a writer struggles with (at least I struggle with) is making a character's actions emotionally valid and believable in regards to the plot. Y'know, sometimes you want your character to do this or that, you want to get to this crucial scene, you want to write it so badly for reasons of plot or just, y'know, it'd be a hell of a lot of fun to write . . . but you don't make it believable that the character would actually do it. You know, why is he there? Why did she do this or that? If the reason is "because the plot needed them to," well, that's okay, every plot needs its characters to do certain things, open certain doors, but if you haven't invested in the character's motivations leading up to that scene, well, it's going to show. And sometimes there are scenes where several characters come into it with motivations, and they all need to act believably within that framework—otherwise a reader will wonder, Why the hell did character X or Y make that abrupt left turn? When you first start writing maybe you think nobody will notice. They do. So the emotional template you start with . . . you have to stick to it. Or if a character has a change of heart, you have to build that up and work at it. So much of what you incept at the beginning of a novel, where maybe you're still trying to get to know a character yourself . . . anyway, I've learned to be aware of these things in terms of character development.

TQ:  What sorts of research did you do for The Acolyte?

Nick:  Eh, not so much as you might think/perhaps hope. I read the bible cover to cover. That was arduous. Otherwise, really, just other dystopian novels. Trying to get a feel for how other writers approached them.

TQ:  Without giving anything away, please share one or two of your favorite lines from The Acolyte.

Nick:  Hereinafter let it be known: The Church IS the State.

Nick:  I've got a couple books coming out under my real name. Precious Cargo, nonfiction, about my year driving a school bus. And a short story collection, too. As Nick Cutter, the next book is called Little Heaven.


The Acolyte
ChiZine Publications, May 19, 2015
Trade Paperback and eBook, 296 pages 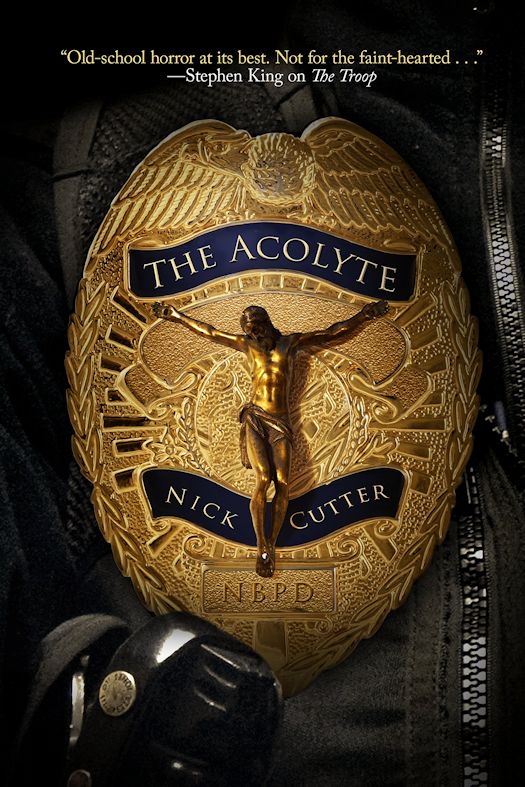 Jonah Murtag is an Acolyte on the New Bethlehem police force. His job: eradicate all heretical religious faiths, their practitioners, and artefacts. Murtag’s got problems—one of his partners is a zealot, and he’s in love with the other one. Trouble at work, trouble at home. Murtag realizes that you can rob a citizenry of almost anything, but you can’t take away its faith. When a string of bombings paralyzes the city, religious fanatics are initially suspected, but startling clues point to a far more ominous perpetrator. If Murtag doesn’t get things sorted out, the Divine Council will dispatch The Quints, aka: Heaven’s Own Bagmen. The clock is ticking towards doomsday for the Chosen of New Bethlehem. And Jonah Murtag’s got another problem. The biggest and most worrisome . . . Jonah isn’t a believer anymore.