Nancy:  I'm not terribly quirky as a writer. That's probably because writing was my day job (reference and how-to books) for several years before I published a novel. To me, writing means sitting down at the computer and getting the job done.

Nancy:  A little of both, but slightly more on the plotter side. I like to start a new project by writing a very loose outline that covers the big moments in the plot: inciting incident, plot point 1, midpoint, plot point 2, reversal, climax. At the early stages, I don't try to flesh it out more than that. My loose outline offers two benefits: (1) It breaks up the novel and gives me goals to write toward and (2) it allows room for surprises to arise during the writing. Those surprises—things you just can't anticipate during the early plotting stages—are the most exciting part of writing. They mean that the novel is alive and growing on its own. If I try to plot too intricately, there's no room left for surprise and spontaneity.

TQ:  What inspired you to write the Deadtown series?

Nancy:  Before I published any fiction, I used to read lots of agent blogs. One of my favorite features was when an agent would list pet peeves from query letters he or she received. I guess reading those posts made me feel like I wasn't too far out in left field. One day, an agent wrote that she disliked the phrase “So-and-so wrestles with his own personal demons,” because who else besides you would wrestle with your demons? I decided to take her question seriously, and I started thinking about a character whose job was to exterminate other people's personal demons. And so Vicky Vaughn was born.

TQ:  What sort of research have you done to create the Deadtown world?

Nancy:  Most of my research has to do with the series' background mythology, which is drawn from the stories and legends of the Welsh Mabinogion. Vicky's race, the Cerddorion, is descended from the goddess Ceridwen, who could shapeshift. I began my career as a medievalist (I used to be an English professor), so I have a background in medieval literature. But it's been a lot of fun digging deeper to get more background material for Vicky's story. In Bloodstone, for example, Myrddin Wyllt, one of the precursors to Merlin the wizard from Arthurian literature, shows up to give Vicky and her Aunt Mab some trouble.

TQ:  Why did you set the series in Boston, Massachusetts?

Nancy:  I love Boston. I went to college there, and I lived in or near Boston for several years outside of college. It's an interesting mix of liberal and conservative, traditional and cutting-edge. It's a compact but cosmopolitan city with very distinct neighborhoods. When I needed a setting where people would have to deal with the sudden creation of 2,000 “zombies,” Boston immediately leaped to mind.

TQ:  Without giving anything away, what is/are your favorite scene(s) in Bloodstone (Deadtown 3)?

Nancy:  I always have fun writing the scenes that take place in Creature Comforts, a monster bar in the New Combat Zone (the area between the checkpoints into Deadtown and human-controlled Boston). In Bloodstone, Vicky goes to Creature Comforts on a very serious mission, needing urgently to speak with Axel, the bar's owner. When she steps inside, she finds herself in the middle of a werewolf bachelorette party. It was fun to see how she dealt with the dominance challenges of a female werewolf about to mate while not losing sight of her reason for going to see Axel in the first place.

TQ:  In Bloodstone, who was the most difficult character to write and why? The easiest and why?

Nancy:  Now that I'm three books into the series, I know the recurring characters pretty well. These characters—Vicky, Kane, Mab, Tina, Juliet, and others—are anchored in the previous stories. It's not that they're easy to predict so much as I'm quicker to recognize how they will and won't act. I guess that means that the hardest character to write in Bloodstone was Vicky's nemesis, Myrddin. Although he's grounded in mythology, it took some time to define him for my story. I had to rewrite his early scenes several times to get him right. There's something crazy about him—being cooped up in a yew tree for 1500 years has left him a little unhinged—but I need to work with him for a while to understand his mental state and not just make him a stereotype of “crazy.”

TQ:  Who is your favorite character in the Deadtown series so far? Has any character surprised you?

Nancy:  Vicky is my favorite character, which is a good thing since she provides the narrative voice. I admire her because she's smart and loyal and far braver than I am. Yet I can also relate to her because she has to make sacrifices and sometimes she's uncertain of herself. The character who surprises me the most is Tina, Vicky's teenage zombie sidekick. She's always saying and doing things I don't expect, often taking the story in a whole new direction.

TQ:  How many Deadtown novels are planned?

Nancy:  I currently have four novels under contract but hope to keep the series going for six or seven books. The fourth Deadtown novel, Darklands, will be out next summer. In it, Vicky travels to Annwn, the Welsh realm of the dead, to prevent the resurrection of a Hellion.

Nancy:  I'm currently putting the finishing touches on Darklands. When I've turned in that manuscript, I want to write a prequel that explains what happened during the zombie plague that created Deadtown. I envision that as a novella, which I'll release as an ebook along with some other short stories set in Deadtown's world. Outside of urban fantasy, I'm working on a sequel to Peace, Love, and Murder, a contemporary (nonparanormal) mystery that was my first published novel. PLM is currently available as 99-cent ebook, and readers have been asking what happens next. So as soon as I have time, I'll answer that question with a followup mystery.

Nancy:  Thank you so much for inviting me! It's been a fun visit, and I enjoyed the interview. 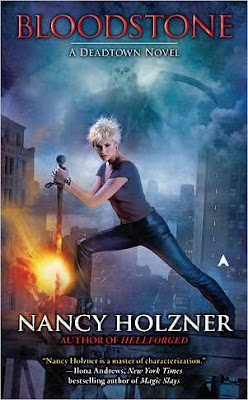 They call it Deadtown: the city's quarantined section for its inhuman and undead residents. Most humans stay far from its borders - but Victory Vaughn, Boston's only professional demon slayer, isn't exactly human...

Boston's diverse South End is known for its architecture and great restaurants, not its body count. So when mutilated human corpses begin turning up in the area, the entire city takes notice. The killer-dubbed the South End Reaper-uses a curved blade for his grisly work. And even though there's no real evidence pointing to a paranormal culprit, the deaths are straining the already-tense relations between Boston's human and inhuman residents.

As the bodies pile up, Vicky, her formidable aunt, Mab, and her werewolf boyfriend, Kane investigate, only to find that the creature behind the carnage is after something much more than blood... 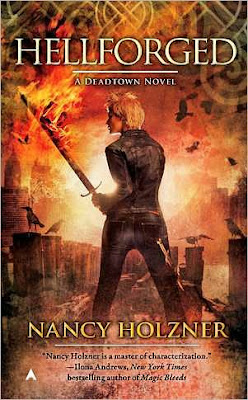 A demon is stalking Vicky's dreams-just as several of Deadtown's zombies are viciously attacked and become really dead. And when Vicky realizes she is the only connection between the victims, she suspects that the demon is somehow working through her dreams to become Deadtown's living nightmare. 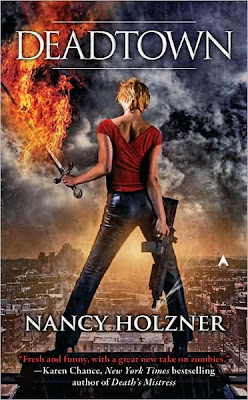 First in a brand new urban fantasy series that's "fresh and funny, with a great new take on zombies" (Karen Chance) and "full of dangerous magic and populated with characters so realistic, they almost jump off the page" (Ilona Andrews).

They call it Deadtown: the city's quarantined section for its inhuman and undead residents. Most humans stay far from its borders-but Victory Vaughn, Boston's only professional demon slayer, isn't exactly human. 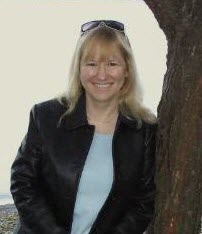 Nancy Holzner is the author of the Deadtown urban fantasy series featuring shapeshifter Victory Vaughn. After beginning her career as a medievalist, Nancy has worked as a high school teacher, corporate trainer, freelance editor, and technology writer. She lives in New York's Finger Lakes region with her husband, Steve. Besides writing urban fantasy, Nancy also writes mystery novels. Peace, Love, and Murder is the first book in her mystery series set in an upstate New York college town.

What:  One commenter will his or her choice of a signed copy of Deadtown, Hellforged, or Bloodstone from Nancy!

If you were a demon slayer what sort of paranormal/supernatural being
would be your sidekick?
Please remember - if you don't answer the question your entry will not be counted.

Who and When: The contest is open to all humans on the planet earth with a mailing address. Contest ends at 11:59pm US Eastern Time on Wednesday, September 28, 2011. Void where prohibited by law. You must be 18 years old or older to enter.

49 Comments on The Qwillery: Interview with Nancy Holzner and Giveaway - September 21, 2011