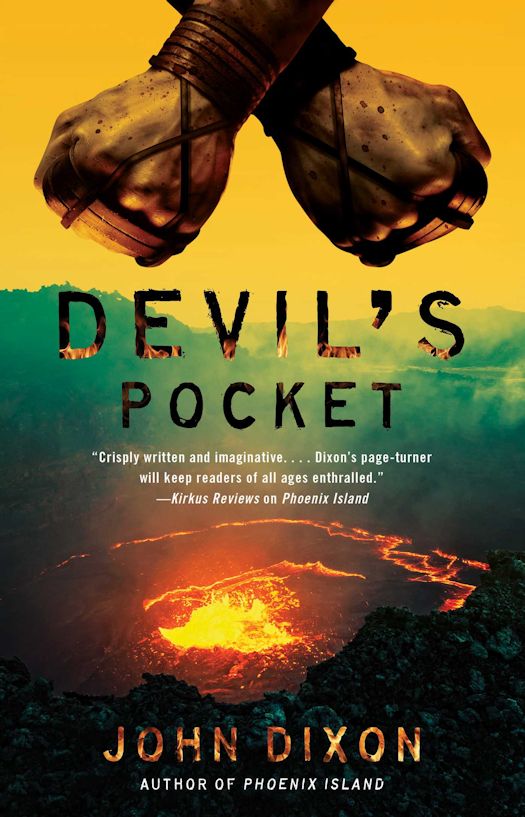 The follow-up to the critically acclaimed Phoenix Island, which reads like “Lord of the Flies meets Wolverine and Cool Hand Luke” (F. Paul Wilson, creator of Repairman Jack) and inspired the CBS TV show Intelligence.

With a chip in his head and hundreds more throughout his body, sixteen-year-old Carl Freeman was turned from an orphan with impulse control issues into a super-soldier. Forced into the mercenary Phoenix Force group, he begins to fear he’ll never escape. Sent to a volcanic island to fight for them, he’ll compete in a combat tournament that awards teens with survival for merciless brutality. But just when all looks lost, he spies a friendly face…and possibly a way out.

In the hard hitting sequel to John Dixon's award winning Phoenix Island protagonist Carl Freeman finds himself in the Devil's Pocket. The chip that has enhanced Carl's mind and body has transformed him into the ultimate fighting machine. It's made him stronger and faster, but has also unleashed a murderous rage which takes all of his discipline to curb. When Commander Stark offers a new assignment with a reward he can't refuse, Carl happily accepts. His mission is to win the Funeral Games in which fighters from all over the world will battle in a secret arena. Stark promises Carl the position of second in command if he triumphs, which would allow Carl the opportunity to get the information he desperately needs to destroy Phoenix Island for good. If there is one thing Carl knows, it's how to fight and he finds himself excited to be a part of this blood sport competition. However, the stakes at the Funeral Games are deadlier than Carl ever imagined and even his enhancement chip won't prevent him from ending up against the ropes.

Devil's Pocket is a combination of jabs, crosses and uppercuts that will keep its readers engrossed in its pages. Dixon's sequel packs a punch and the savagery of the cage fighting sequences really had me on the edge of my seat. I like the unexpected twists and turns in the storyline. Unlike Phoenix Island, this book is not a straightforward psychological thriller, as Dixon adds a healthy dose of intrigue and espionage to the mix. He also reunites Carl with some old allies and enemies with accompanying complications. The novel's ominous setting creates the perfect backdrop for the action. Dixon definitely knows his fighting techniques, so much so that this book may not be for those squeamish souls who cringe at blood. Not being one of those people, I really enjoyed the fighting choreography and at times felt I was sitting ringside. Another positive is Carl's character development. It rang true that his limited life experiences would cause him heartache. I appreciated that even though the chip has made Carl something of a superhuman, at heart he is still a teenage boy struggling with difficult decisions and the fallout of his own mistakes.

Devil's Pocket can definitely stand alone, however I would point prospective readers in the direction of Phoenix Island to start. I highly recommend this book to readers who like fast-paced, action-packed thrillers.