Interview with Matthew Kressel, author of King of Shards

Interview with Matthew Kressel, author of King of Shards

Published:
Please welcome Matthew Kressel to The Qwillery as part of the 2015 Debut Author Challenge Interviews. King of Shards was published on October 13th by Arche Press. 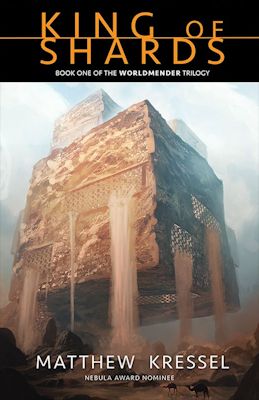 Matthew:  I've always lived in my head, making up stories for my own entertainment, even before I knew what I was doing. Eventually, after many delays, I took a class at the New School in Manhattan on writing Science Fiction, Fantasy & Horror. It was taught by the late Alice K. Turner, who introduced me to constructive critique. She connected me to the writers group Altered Fluid that I'm still a member of today.

TQ:  Are you a plotter, pantser or hybrid?

Matthew:  Both methods work for me, depending on the project. I tend to overthink plots when I "pants" it, so I've found that plotting helps me reign in my tendency for too much complexity (I love detail). On the other hand, there is a wonderful sense of freedom when you are flying by the seat of your pants and not knowing if you will fly straight into a wall or into the clear blue sky. I usually have an ending in mind before I begin either way.

Matthew:  Mostly, it's a time thing. I freelance, so I'm used to jumping between projects, but certain writing projects like novels take a huge amount of directed focus. When I'm jumping between multiple tasks for work and personal life, I find that it's harder to return to that state of hyper focus the novel needs. Ultimately, it's about me setting aside time each day for just that one task.

TQ:  You are also an editor. How does this affect or not your own writing?

Matthew:  I used to edit a 'zine called Sybil's Garage from 2003 to 2010, but I don't edit anymore. Though I would like to edit one or more anthologies in the future, it's not part of my immediate goals. Editing allowed me to view the process from the other side of the transom. It became very clear to me that if you don't hold the editor's attention at every moment, she's going to pass on your story. If you have hundreds of stories to read per month, you are not going to wade through the slow parts of someone's story waiting for it to get good. So in my writing, having that in mind, I realize you have to hook the reader from the beginning and hold her attention throughout. It's harder, of course, but it's made me a better writer.

TQ:  Describe King of Shards in 140 characters or less.

Matthew:  An anonymous saint and a demon king join forces to save the cosmos from the legion of hell.

TQ:  Tell us something about King of Shards that is not found in the book description.

Matthew:  It is partly based on several esoteric Jewish myths, some of which I explore on my blog series 36 Days of Judaic Myth: http://www.matthewkressel.net/tag/36-days-of-judaic-myth/

TQ:  What inspired you to write King of Shards? What appeals to you about writing Fantasy?

Matthew:  I love the myth of the Lamed Vav, which says that there are thirty six anonymous saints who sustain the world. If any one of them cease to be righteous, the world would be destroyed. They are so hidden and anonymous that you or I could be one and not know it. It says you never know if the person whom you meet is one of these saints, so you should treat all people as if they are one. And I thought to myself, somewhat insidiously, if they sustain the world, what would happen if someone killed them all? Eventually a plot arose in my mind of a horde of clever demons trying to kill the Lamed Vav in order to bring power and life to their long suffering world. That's how King of Shards was born.

What I love most about writing fantasy is the absolute freedom. In fantasy, you are not bound by ordinary rules of space and time, and thus anything is possible.

TQ:  What sort of research did you do for King of Shards?

Matthew:  I researched heavily into various Judaic myths and folklore, and also into pre-Judaic Assyrian and Babylonian myths. A lot of these folktales and so-called apocryphal stories were appropriated from earlier cultures and religions and re-framed into the Judaic concept of reality. So you get cool things like the Babylonian night succubi "lilitu" becoming the terrifying Lilith, who later becomes a potent symbol of female independence and feminism. You get to learn that along with the Leviathan of the sea and the Behemoth of the land, there is the Ziz, an enormous bird whose wingspan goes from one end of the world to the other, and whose legs are so tall that if you dropped a hammer at their top, it would take seven years before it hit the ground. And I got to learn about the Shamir worm, which is a magical worm that can crack apart the hardest stone just by its mere touch and was used to construct the ancient Jerusalem Temple. And I read how King Solomon enslaved Ashmedai, the demon king, in order to find the location of the Shamir worm. There are so many wondrous treasures like these.

Matthew:  I found Ashmedai the most fun. His voice came naturally to me. He's angry because his creator destroyed his world and almost killed him too. But he survived -- by the skin of his teeth. And now he's angry and wants justice. He's so determined that he'll do anything to get his way, even if that means killing anyone who gets in his path. Righteous indignation is a powerful motivating force. Daniel, on the other hand, was the most difficult for me. He's a Lamed Vavnik -- a saint -- though he doesn't know it at first. By nature, he's humble and kind, a do-gooder. That doesn't exactly make for an exciting character, and so I needed to have him change his behavior throughout the story without sacrificing his core morality. I never wanted him to become truly evil, merely corrupted, so it was a fine line to toe.

TQ:  Which question about King of Shards do you wish someone would ask? Ask it and answer it!

Matthew:  Who is the cover artist? His work is amazing!

The cover artist is Leon Tukker. He's an art student from the Netherlands and his work is amazing. He's only just started with this stuff and he's clearly got talent. I think more people should be aware of him, and I expect you'll be seeing his stuff on more covers soon. Check out his portfolio at: https://www.artstation.com/artist/leontukker

TQ:  Give us one or two of your favorite non-spoilery lines from King of Shards.

Not where the hell, Daniel, the demon thought, but which one.

One city’s rubble is the next city’s foundation.

Matthew:  So I have two stories coming out soon. "Demon in Aisle 6" about a high-school kid who sees a demon in his mega-store where he works, comes out in Nightmare Magazine in November. And "The Problem of Meat" about interdimensional beings that eat our emotions, is coming out in the reboot of Grendelsong at the end of October around Halloween. Other than that, I'll be working on the sequel to King of Shards.

Matthew:  Thank you so much for letting me participate! 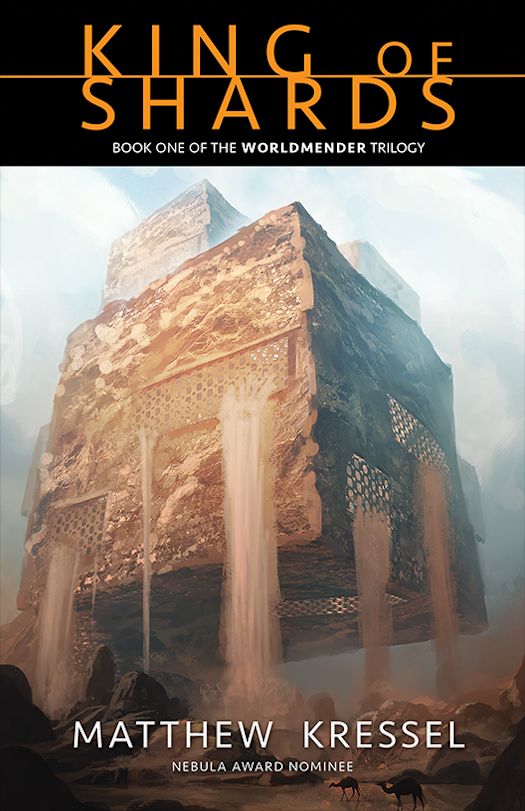 His novel, King of Shards, debuts October 13, 2015 from Arche Press, an imprint of Resurrection House.

His story “The Meeker and the All-Seeing Eye” was a 2014 Nebula Award nominee for Best Short Story.

His story “The Sounds of Old Earth” was a 2013 Nebula Award nominee for Best Short Story. The story also made the 2013 Locus Recommended Reading List.

His short stories have or will appear in such publications as Lightspeed, Nightmare, Clarkesworld, io9.com, Beneath Ceaseless Skies, Interzone, Electric Velocipede, Apex Magazine, and the anthologies Naked City, After,The People of the Book, and The Mammoth Book of Steampunk, as well as other markets.

In 2011 Matthew was nominated for World Fantasy Award in the category of Special Award, Non-Professional for his work editing Sybil’s Garage.

In 2003 he started the speculative fiction magazine Sybil’s Garage,  and the stories and poetry therein have received multiple honorable mentions in the Year’s Best Fantasy & Horror. Under the rubric of Senses Five Press, Matthew published Paper Cities, which won the 2009 World Fantasy Award for Best Anthology.

Matthew has been a long-time member of Altered Fluid, a Manhattan-based writing group. He is also obsessed with the film Blade Runner.

When he’s not writing, Matthew designs websites, which he has done for Stanford University, Columbia University, the magazines Weird Tales, Fantasy, and Beneath Ceaseless Skies, writers Genevieve Valentine, Nicholas Kaufmann, Chris Willrich, and many others. He has coded applications and websites for ADP, Alliance Bernstein, and Nikon, among others. He also administers office computer networks. If you’re interested in his IT services, you can check out his business website here.

Report "Interview with Matthew Kressel, author of King of Shards"