Published:
Please welcome C.M. Waggoner to The Qwillery as part of the 2019 Debut Author Challenge Interviews. Unnatural Magic was published on November 5, 2019 by Ace. 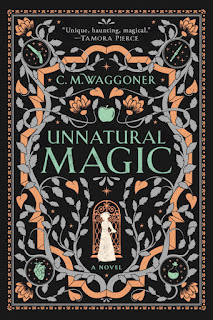 C.M.  A truly terrible, fairly plotless stab at a fantasy novel when I was about fourteen – I think I gave up at it at about 150 pages in because I realized that I hadn’t thought as far as an ending!

C.M.  Definitely a hybrid. I tend to write a loose outline and then fill in the gaps as I go. In my experience trying to make things up as I go along just results in another document to add to my failed novel graveyard file.

C.M.  I always tell people that the hardest thing about writing for me is getting the characters from one room to another. I always have scenes that I especially want to write in mind before I get started, but moving characters from one interesting scene to the next one is always a struggle!

C.M.  A combination of the fantasy I read as a kid and classic authors who wrote particularly beautiful or witty prose. My childhood fantasy favorites were probably Tamora Pierce, Monica Furlong and Diana Wynn Jones. In terms of classics Oscar Wilde, P.G. Wodehouse and Raymond Chandler are big inspirations. If I think about adult fantasy authors who I admire, Terry Pratchett, Neil Gaiman, and N.K. Jemisin top the list, though I’m so suggestible

TQ:  Tell us something about Unnatural Magic that is not found in the book description.

C.M.  There’s a romantic subplot that’s a pretty major part of the book that doesn’t show up in the book description, but it was one of my favorite parts of the book to write. I wanted to create a couple that didn’t look like the couples that I’m used to seeing in fiction, and I hope that readers enjoy what I came up with!

TQ:  What inspired you to write Unnatural Magic? What appeals to you about writing Historical Fantasy?

C.M.  My initial inspiration came mostly from having consumed so much fantasy as a kid and young adult, and wanting to explore the tropes that I encountered in those books in a playful way. For example, with my depiction of trolls I wanted to tackle the trope of fantasy “races” who have homogenous cultures across their entire species (why do dwarves speak dwarvish when humans don’t speak “human”?) and are constantly at war with each other, and come up with a different way to imagine what it would look like if humans really did coexist with other peoples. In Unnatural Magic I imagined the relationship between the trolls and humans of Daeslund as being less like that between humans and orcs in The Lord of The Rings and more like the real-life relationship between the English and the French – sometimes at war, sometimes allies, and sometimes one completely conquering the other, to the point that it’s impossible to completely untangle where one culture ends and the other begins.

I’m not sure if I think of Unnatural Magic as historic fantasy, exactly, because to me the term brings to mind books that are more alternate history or fantasy retellings of historic events, and Unnatural Magic is definitely second-world fantasy! Basing my worldbuilding in a more Victorian/Regency-flavored culture than the more traditional medieval-style fantasy just made sense to me because I’m such a huge fan of Victorian lit and know little to nothing about the medieval period – I also knew I’d do a better job of worldbuilding based on a historic era that I’m familiar with than trying to make something up from scratch!

TQ:  What sort of research did you do for Unnatural Magic?

C.M.  Since it’s second-world fantasy I didn’t feel particularly constrained by getting facts about any particular place and time exactly right, but I did do research to try to make the level of technology fairly consistent across the board so that the world made sense – for example, I wanted to make sure that a town’s economy could be based on a pencil eraser factory in an era while trains are also a fairly new and somewhat alarming technology. I do own a couple of reference books about the Regency and Victorian era as well, and look forward to diving back into them as I flesh out the worldbuilding more in my next books.

TQ:  Please tell us about the cover for Unnatural Magic.

C.M.  The cover art is by Tomas Almeida, and there are little clues for things that happen in the book hidden in the corners, like the apple and the heart. It was very fun brainstorming ideas for things to include!

TQ:  In Unnatural Magic who was the easiest character to write and why? The hardest and why?

C.M.  Jeckran was the easiest to write because his ways of thinking and speaking are the closest to my own. Onna was harder because I wanted to write her as a naturally feminine, socially adept people-pleaser, but when I was her age I bought my clothes from the men’s section and was pretty hopeless at interacting with my peers. I actually consulted with friends about their inner processes as teen girls in order to try to get it right, though I’m not sure how successful I was!

TQ:  Which question about Unnatural Magic do you wish someone would ask? Ask it and answer it!

Q: Are there any enormous trolls sitting in tiny armchairs and drinking out of tiny teacups in your book?
A: Yes. Yes there are.

TQ:  Give us one or two of your favorite non-spoilery quotes from Unnatural Magic.

“You’re terribly clever, aren’t you? How very charming. You’re clever like me, and theatrical like me, and one always finds it so wonderfully enriching to spend time around people who are almost exactly like oneself.”

C.M.  I’m currently almost done writing my second book, which takes place in the same world as Unnatural Magic but follows different characters – though there are guest appearances from some of the folks in Unnatural Magic.

C.M. Waggoner is at work on her next novel.