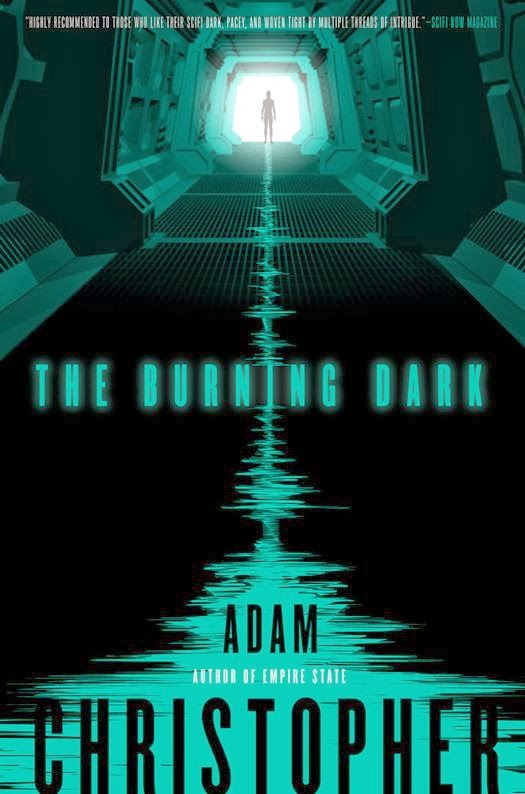 Adam Christopher's dazzling first novel, Empire State, was named the Best Book of 2012 by SciFi Now magazine. Now he explores new dimensions of time and space in The Burning Dark.

Back in the day, Captain Abraham Idaho Cleveland had led the Fleet into battle against an implacable machine intelligence capable of devouring entire worlds. But after saving a planet, and getting a bum robot knee in the process, he finds himself relegated to one of the most remote backwaters in Fleetspace to oversee the decommissioning of a semi-deserted space station well past its use-by date.

But all is not well aboard the U-Star Coast City. The station's reclusive Commandant is nowhere to be seen, leaving Cleveland to deal with a hostile crew on his own. Persistent malfunctions plague the station's systems while interference from a toxic purple star makes even ordinary communications problematic. Alien shadows and whispers seem to haunt the lonely corridors and airlocks, fraying the nerves of everyone aboard.

Isolated and friendless, Cleveland reaches out to the universe via an old-fashioned space radio, only to tune in to a strange, enigmatic signal: a woman's voice that seems to echo across a thousand light-years of space. But is the transmission just a random bit of static from the past--or a warning of an undying menace beyond mortal comprehension?

The Burning Dark is a dark atmospheric Science Fiction Horror novel by Adam Christopher.
I'm a big fan of novels that make outer space horrific and Christopher does just that. He picks the perfect setting, a decommissioning space station with a skeleton crew next to a purple star pulsing out radiation that can kill in five minutes of exposure. To make things even better, Christopher uses the shadows and sounds of this environment with outstanding skill to haunt the characters.

Christopher does a wonderful job of using the space radio. I love the idea of this juxtaposition between what is essentially a ham radio amongst future tech and the horror it unleashes and the physiological damage it causes.

With everything I loved about the book, I still had an issue with two things. Captain Abraham Idaho Cleveland is a bizarre protagonist for me. At the beginning of the story, he's saving worlds and fighting off spiders and then he's getting beaten up by marines and acting nerdy. I never felt like 'Ida' was a concrete character I could engage with. Even with his haunted past and weaknesses, I had a hard time empathizing with him. I also really got distracted by the amount of adult language that was used throughout the book. I understand it's dealing with men and women in the military and there's a lot of creepy things going on, but it threw me out of the story a lot. I'm not squeamish by any means. I grew up with a father who was in the military and worked in the oilfields, so I'm used to hearing plenty of swearing, but it seemed a bit much for me.

The Burning Dark is a wonderful blend of Science Fiction and Horror with a perfectly developed world that is used to enhance the horror and stress of the events in the book. Even with a weak protagonist and more language than I like, I plan on reading the next book in the series. Christopher's ability to create a standout setting and interesting story demands it.

I would only recommend this book to adults because of its strong language, violence and adult situations. This series is perfect for those of us who like science fiction horror genre blends.
Source: qwillery.blogspot.com
+ Sharelabels (7)Flag
AllAdam ChristopherBook ReviewsBranniganSpider WarsThe Burning DarkTor Booksreview