Published:
Please welcome Adrian Cole to The Qwillery. The Shadow Academy was published earlier in September by EDGE Science Fiction and Fantasy Publishing. 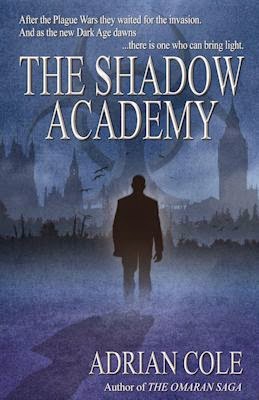 Adrian:  Started hand writing my first “book” at 12, inspired by Black Beauty. I just loved writing and exercising what teachers referred to as an “overactive imagination.” Started my first novel (i.e. with serious intent to try and sell it) when I was 18. After a couple of re-writes (over 5 years) I had it published as The Dream Lords trilogy from US publisher, Zebra Books. I never felt passionate about anything – i.e. work-wise – other than writing. My working life was a necessity, never a career, or a prime drive.

Adrian:  Well, I definitely plot my stuff carefully, including short stories. Word processing makes it a lot easier than the old hand-written days and I go over my stuff many times before I actually send it off to my agent or a publisher. The Shadow Academy went through 3 versions before it went to EDGE.

As for being a “pantser”, well, heck, here in the UK a “pantser” probably means something rude, so I’d rather not divulge any of my more dubious habits.

Adrian:  Making my characters as strong as they need to be, that is, credible and vivid enough for my readers to empathize with them, even if they don’t sympathize with them. I like to think that now, at the ripe old age of 65 I’ve got a better handle on things than I did when I started out – in those early works I tended to swamp everything in plot and action – all good fun, but character did suffer, on reflection.

TQ: Who are some of your literary influences? Favorite authors?

Adrian:  Obvious influences from the early days were Edgar Rice Burroughs, Henry Rider Haggard and Tolkien, to name just a few (and I still love them) but I am very fond of Shakespeare and I don’t know if there is anyone else I can read and re-read as much (as well as get to see live performances). Also love Dickens, and on the lighter front I go for John le Carré. Favorite modern fantasy writers would be Dan Simmons and Jonathan Carroll.

TQ:  Describe The Shadow Academy in 140 characters or less.

Adrian:  A novel about power and its abuse set in a world not far removed from our own. (You did mean characters, not words? I could do a better job in 140 words!)

TQ:  Tell us something about The Shadow Academy that is not in the book description.

Adrian:  I worked as a Business Manager in a secondary sixth-form college for over 20 years and there were inevitably parallels between central government (in Westminster), local government (County level) and college government – the effects of authority on adults and children alike undoubtedly sparked off in me a reaction that powered the book.

TQ:  What inspired you to write The Shadow Academy and how would you describe the genre or range of genres into which it fits?

Adrian:  I hadn’t written a novel for several years, but as I neared retirement, I felt a strong urge to start something new and as I mentioned in the last paragraph above, I could see how easily authority, although possibly well-meaning, could be corrupted and directed in ways that would not be beneficial. Also, of course, I wanted to tell a good story – my old urge to try and thrill readers and surprise them still burned strongly, so The Shadow Academy is primarily an SF thriller, but with food for thought thrown in for good measure.

TQ:  What sort of research did you do for The Shadow Academy?

Adrian:  A lot of the book was based on my own experiences, both geographically and from working for an Authority and in a large school. But I needed to do a certain amount of research into paganism, given that the Green Man plays an important part in the book. A lot of my books have a strong Celtic influence and at least one reviewer of The Shadow Academy was quick to pick up on that.

Adrian:  Easiest was probably the devious and always plotting Deadspike, probably because, in my worst moments I’m a bit like that! No, that’s not quite true – I’m much more lovable and less self-centred. Quite a few of the other characters were harder to write because I did not want to use anyone that I had known as part of the cast – of course, any good writer would use characteristics and traits based on what he/she has experienced in meeting people – so my characters are not based on real people. They are, though, realistic, at least that is the intention.

TQ:  Give us one or two of your favorite non-spoilery parts from The Shadow Academy.

Adrian:  When the tension is cranking up in the earlier part of the novel, there is a scene where the main protagonist, Chad Mundy, is apparently being hunted by a number of ruthless men, and it’s clear that they mean him harm. At this point in the narrative, the reader does not know if the hint of a supernatural element to the book is going to make itself manifest, so the atmosphere grows ever tauter.

And there’s a scene near the climax of the book, at the Green Man Festival, where the forces of the Authority are about to unleash a terrible fate on the pagans…

Adrian:  I’ve just had a collection of stories published in the UK (by Alchemy Press) about a no-holds barred, tough guy private eye, Nick Nightmare Investigates. These stories are in a very different style to The Shadow Academy, written in the first person by a droll Mickey Spillane type hero, whose main antagonists are the type of horrors usually found in the Cthulhu Mythos of H. P. Lovecraft. Very tongue in cheek and a tribute to the old pulp heroes of yore.

Also very hard at work on a detailed fantasy trilogy of novels – an “alternative” history of Romano-Celtic Europe at the time of the Augustans. Centred around the Germanic warlord, Arminius and his on-going struggle with Germanicus, neither of whom are assassinated in my alternative world. The consequences of their surviving will re-shape European history…

Adrian:  Thank you for having me. 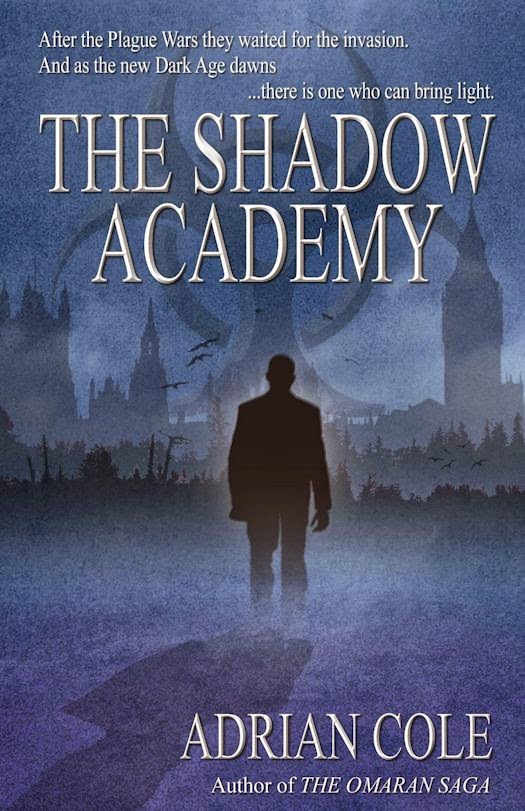 After the Plague Wars they waited for the invasion. And as the new Dark Age dawns... there is one who can bring light.
In a world little more than a whisper away from ours, the islands of Grand Brittannia lie just off the shores of the deeply forested content of Evropa, the dark and forbidding realm of legends scarcely remembered.

Grand Brittannia, itself almost completely a place of deep forest and mystery, has at its heart the crumbling, anachronistic administrative city of Londonborough. From here the Central Authority wields power over the Islands and exercises its control rigidly and clinically. Since the rigours of the Plague Wars, some hundred years in the past, when almost the entire population of the world was wiped out and the gradual decline of civilization began, industry and technology have atrophied, their development now strictly vetted by the Authority.

Out on the far-flung coasts, a network of ancient fortress ports wait in readiness for an invasion that some say will never come, their ancient, declining Academies committed to the rigours of training the defenders of the Islands. These Academies are subjected to regular inspections by Enforcers from Londonborough, and their native inhabitants are constantly being swelled by the young military graduates from the Authority's own Military Academies in the center. Into a cauldron of intrigue and subterfuge that is the town and Academy of Petra comes Chad Mundy, the Authority's replacement for Drew Vasillius, a veteran teacher who has committed suicide. At least, that is what he's been told... 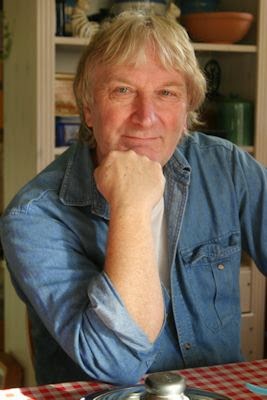 Adrian Cole was born in Plymouth, Devonshire in 1949. He is currently the Director of College Resources in a large secondary school in Bideford, where he now lives with his wife, Judy, son Sam, and daughter Katia. He remains best known for his Dream Lords trilogy as well as his young adult novels, Moorstones and The Sleep of Giants.