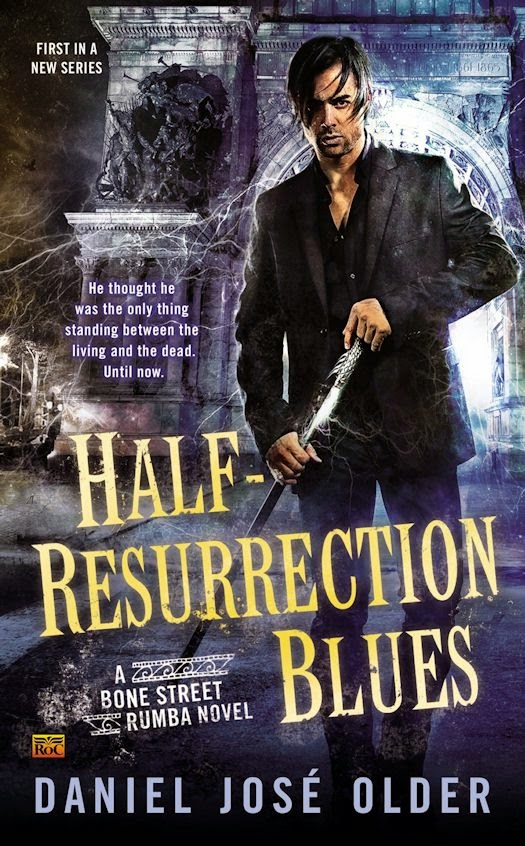 “Because I’m an inbetweener—and the only one anyone knows of at that—the dead turn to me when something is askew between them and the living. Usually, it’s something mundane like a suicide gone wrong or someone revived that shouldn’ta been.”

Carlos Delacruz is one of the New York Council of the Dead’s most unusual agents—an inbetweener, partially resurrected from a death he barely recalls suffering, after a life that’s missing from his memory. He thinks he is one of a kind—until he encounters other entities walking the fine line between life and death.

One inbetweener is a sorcerer. He’s summoned a horde of implike ngks capable of eliminating spirits, and they’re spreading through the city like a plague. They’ve already taken out some of NYCOD’s finest, leaving Carlos desperate to stop their master before he opens up the entrada to the Underworld—which would destroy the balance between the living and the dead.

But in uncovering this man’s identity, Carlos confronts the truth of his own life—and death.…

From the first page of Half-Resurrection Blues I was a little in love with the dapper gentleman of color, Carlos Delacruz. Neither entirely dead nor completely alive he acts as an enforcer for the council that governs the behavior of the dead in New York City. We follow Carlos on his various cases as he attempts to thwart a plot directed at merging the world of the dead and the living. As the title suggests, Carlos is also lonely and searching for something to make sense of his own inbetweener status and merge those separate identities within him. Carlos makes and loses friends along the way as he chases the mystery of his own not quite dead status and is drawn to the enigma that is Sasha.

Based in a community of color with a gay santero, the cast is certainly diverse and treated respectfully by the author on all counts. This is very much a character driven story with rich and sensual characters and a prose that may read as florid for some, but is rich and enticing to me. The conclusion of the story only left me wanting more from all the characters. I do hope in the future Older plans on giving more light to Kia, the teenage bodega manager.

All the praise I have seen for this newer author is certainly well-deserved. The city and life are noir and gritty without trying too hard. The characters have depth and individual struggles that a broad swath of people can identify with. My only concern is that in places the overarching plot to keep the world of the dead and the living separate was a weak foil for Carlos’ own internal struggles. For all the build up around the dangers of this feared event and dangerous villain and demonic minions the end result was a little anti-climactic. Again, in the balance, this was a beautiful book and very well written. More than worth it and I hope to see many more books by this author over the years ahead.
Source: qwillery.blogspot.com
+ Sharelabels (7)Flag
AllBone Street RumbaBook ReviewsBrandonDaniel Jose OlderHalf-Resurrection BluesRocreview