Published:
I haven't had time to finish reading Dead Iron: The Age of Steam yet, but so far it's incredibly good. Devon Monk has created a very special steampunk world that I am enjoying immensely. I'll have a review up soon.

In the meantime I want to give away a copy of Dead Iron generously provided by ROC (the publisher) and a gorgeous steampunk bracelet made by Synde at Cemetery Cat Jewelry and provided by The Qwillery. The bracelet looks really nice with the book! 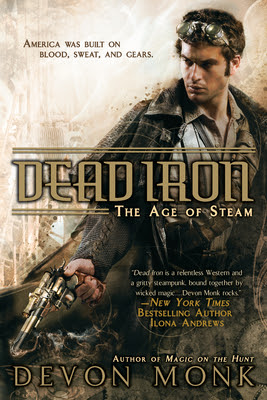 Welcome to a new America that is built on blood, sweat, and gears...

In steam age America, men, monsters, machines, and magic battle for the same scrap of earth and sky. In this chaos, bounty hunter Cedar Hunt rides, cursed by lycanthropy and carrying the guilt of his brother's death. Then he's offered hope that his brother may yet survive. All he has to do is find the Holder: a powerful device created by mad devisers-and now in the hands of an ancient Strange who was banished to walk this Earth.

In a land shaped by magic, steam, and iron, where the only things a man can count on are his guns, gears, and grit, Cedar will have to depend on all three if he's going to save his brother and reclaim his soul once and for all...

What:  One commenter will win a Trade Paperback copy of Dead Iron provided by the publisher and the 17 Jewels bracelet hand-crafted by Synde (Cemetery Cat Jewelry) and provided by The Qwillery Both items will be sent together.

What is your favorite book genre?
Please remember - if you don't answer the question your entry will not be counted.

Who and When: The contest is open to all humans on the planet earth with a mailing address. Contest ends at 11:59pm US Eastern Time on Wednesday, July 13, 2011. Void where prohibited by law.