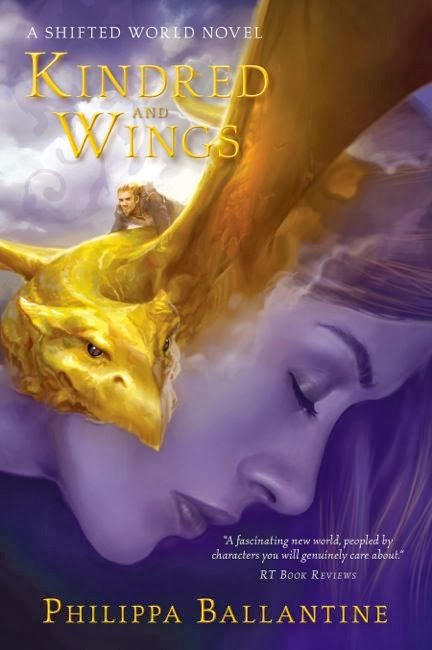 On the back of the dragon Wahirangi, Finn the Fox flees the world he has known. As he sets out to find the brother he never knew of, he still holds in his heart the memory of the Hunter. He has denied his love for her, but he cannot deny it forever.

In the halls of the Last Believers, Talyn begins to uncover her own mysteries, but her lust for the death of the Caisah is still strong and clouds her vision. She must choose her path, as the Seer of her people or as the assassin of the overlord.

Meanwhile, Byre, Talyn's brother, must venture into the fiery world of the Kindred, to
rebuild the pact that his ancestors made. He will risk everything he is as he forms a new pact that will change his people forever.

Dragons and myths will be reborn, as the Hunter and her Fox face each other once more.

Kindred and Wings is the second installment in the fantastical, fantasy series Shifted World by Philippa Ballantine. Book 2 starts almost immediately after Hunter and Fox and all our favourite characters are back. Finn the Fox is searching for his lost brother on the back of the glorious dragon Wahirangi, the former Kindred that he named. Talyn, Finn's lost love has left the evil Caisah and is in search for a cure to the Harrowing while her brother Byre and the blood-witch Pelanor find themselves witnessing a past that answers a few questions, creates a few more but more importantly, shows them a past Byre rather he didn't know. We are also given an insight into the past of the Caisah both through Byre's adventures and through his concubine Kelanim. We get to see a different side of the Caisah although Ballantine does not make him anymore likeable which I liked as this would have diminished him as a character and influence in the overall plot. Equo and his brother along with Nyree are also prominent players in this novel and key in the final chapters. I am never quite clear why Equo isn't mentioned in the summary of either of the books as he is integral in the dialogue with other lead characters and him and his brothers are 'enablers' that propel the story forward.

Ballantine keeps a frenetic pace in this book. However, I found it more accessible than in the first novel in the series as I already knew the characters and the strange setting of Conhaero and the Chaos. Ballantine creates such a rich and multi-faceted world for her characters which combined with the sheer number of characters can make it challenging to keep everyone straight. In this installment Ballantine pairs her characters off for most of the story  - Finn and Wahirangi, Byrne and Pelanor, Equo and Nyree, and Talyn and her sykur (horse-type beastie who is treated more or less like a silent character) and then brings them all together at the end of the story. This seems to simplify and streamline the plot, without compromising the overall plot arc. I loved the two 'big reveals' towards the end of the story that slowly started to unravel throughout the book. Its done so subtly and with a smooth build up that it feels like the secrets are exposed to both the reader and the character the same time. I couldn't guess what was going to happen and this is unusual for me as authors tend to pepper the story with so many clues its a wonder the characters don't guess much earlier than they do.

I am a big fan of Ballantine. I love her writing style and story telling abilities however, this series is probably more challenging than her other books. Her environment is richly textured, the characters complex and the plot seems to float along while at the same time it is very tense. Before I started Kindred and Wings I thought that it had a way to go before I liked it as much as her other fantasy series - Books of the Order - but Ballantine does it again and pulls a solid, fantasy novel out of her writing 'bag'. This series however, isn't for everyone. Firstly, you have to like high fantasy and even if you do you have to like a plot that is subtle and a lot of characters that don't always do what you think/want them to.  Kindred and Wings is another great book from Ballantine with another gorgeous cover. I dare you not to spend as much time looking at the cover as you do reading the book.
Source: qwillery.blogspot.com
+ Sharelabels (7)Flag
AllBook ReviewsKindred and WingsMelaniePhilippa BallantinePyrShifted Worldreview