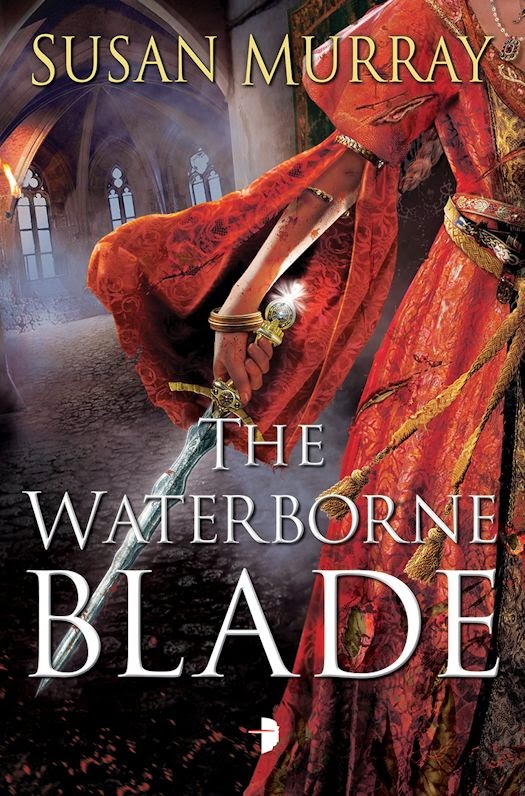 The citadel has long been the stronghold of Highkell. All that is about to change because the traitor, Vasic, is marching on the capital. Against her better judgement, Queen Alwenna allows herself to be spirited away by one of the Crown’s most trusted servants, safe from the clutches of the throne’s would-be usurper.

Fleeing across country, she quickly comes to learn that her pampered existence has ill-equipped her for survival away from the comforts of the court. Alwenna must toughen up, and fast, if she is even to make it to a place of safety. But she has an even loftier aim – for after dreaming of her husband’s impending death, Alwenna knows she must turn around and head back to Highkell to save the land she loves, and the husband who adores her, or die in the attempt.

But Vasic the traitor is waiting. And this was all just as he planned.

As The Waterborne Blade opens, Queen Alwenna learns she must flee her home at Highkell, ahead of the imminent attack on her husband’s realm by her cousin, Vasic. King Tresilian believes that if Alwenna can reach the protection of the island sanctuary of Vorrahan she will escape the machinations of war. He entrusts Alwenna to Ranald Weaver, whose position of “King’s Man”, makes him the ideal candidate to deliver the Queen to safety. She is loath to go but once at Vorrahan meets with the seer, Brother Gwydion, who bestows upon her a powerful gift. This gift, combined with Vasic’s malevolent plans, will propel Alwenna on a journey full of treachery, danger, and unexpected discovery.

The Waterborne Blade is an enjoyable read. Susan Murray uses alternating POV’s to keep the story moving and its pacing is terrific. The use of dreams to fill in Alwenna’s past blends in seamlessly with the unfolding action of the story. Murray’s strong female protagonist begins as a pampered queen and shows excellent growth as she deals with the hardships being presented to her. The supporting cast is also well written, with the exception of, in my opinion, Weaver. Ranald Weaver is a bundle of contradictions. He professes his loyalty often to his king and queen yet I feel his actions do not always follow suit. I also didn’t like his treatment of Alwenna. Weaver’s many character flaws can be forgiven once his past is taken into account but not all. For example, Weaver lies to Alwenna, omits essential information, and is secretly captivated by his queen so what are his true motivations? For her part, Alwenna is an intelligent woman yet even after she finds out she has been deceived, she is still inexplicably drawn to him.

I like the fact that just when I thought I knew where the author was going with the story, something unexpected happened and the book went in a different direction. The Waterborne Blade is an exciting medieval adventure and I would definitely recommend this book to people who like fantasy and enjoy intrigue, magic, romance, and an interesting female lead.
Source: qwillery.blogspot.com
+ Sharelabels (9)Flag
All2015 DAC2015 Debut Author ChallengeAngry Robot BooksBook ReviewsSusan MurrayThe Waterborne BladeWaterbornereviewtrinitytwo