Published:
Please welcome Anne E. Johnson to The Qwillery as part of the 2012 Debut Author Challenge Guest Blogs. Green Light Delivery, Anne's debut for adults, will be published in June.

Green Light Delivery as a Sci-Fi Stew
by Anne E. Johnson
I didn’t set out to write Green Light Delivery as science fiction. At first it was a “bizarro” exercise, and I tried to create something utterly and inexplicably weird. But after about three paragraphs of the first draft, I realized that I wanted a cogent, if wacky, story. That meant human―or at least humanoid―behavior and motivations for the characters. But I was determined to have plenty of weird and wonderful in there, despite a logical narrative arc.

I didn’t even know whether Webrid, the main character, was human when I first started writing. As it turns out, nobody in Green Light Delivery is human because it takes place in an alternative universe. That alone, by some definitions, makes it science fiction.

Before I knew it, I was writing a sci-fi adventure! Some might even call it a space opera, because it involves an entire planetary system.

The scientific element of the novel is non-technical. This is partly due to the fact that the world is seen through Webrid’s eyes, and he doesn’t know a thing about technology. And, although his main problem is a science-based one (there’s some sort of high-tech laser embedded in his skull), he doesn’t understand what’s going on. Lucky for him, some of his friends paid attention at school!

Many people notice a “noir” element to the writing of Green Light Delivery. This does not mean it’s a detective story! There is no private eye. Webrid is stuck solving his own mystery. But there are choices I made in language and perspective that reflect a “pulp” sensibility. For one thing, this involves a certain kind of dark, sarcastic humor, which I do try to control when interacting with people in real life, but which I always have at my disposal.

Setting and character type are also essential for a noir feel. Much of Green Light Delivery takes place in the gritty city of Bargival, where Webrid lives and works, carting items in a hand-pushed cart. He’s an intensely urban (decidedly not urbane) character, who feels uncomfortable among the rich, the educated, or the rural. And he surrounds himself with tough types. At one point he runs into a drug dealer in an alley, and is relieved to meet someone he can relate to.

And then there’s Webrid’s general attitude. Definitely based on the noir model. He has an eye for the ladies, a sardonic world view, and some nagging issues of self-esteem. I didn’t spend my college years reading all those Raymond Chandler and Dashiell Hammett novels for nothing! I did make the decision not to use first-person, though. Unlike Chandler and Hammett, say, who become Philip Marlowe and Sam Spade, I wanted to give the reader a slightly wider-angle view of the proceedings. However, even in the third person, Webrid’s heart and mind are the only ones truly exposed to the reader.

Green Light Delivery was fun to write, and I think readers will find influences from many types of literature in its pages. The reason I became an author of fiction is because I so love reading it! And I’m a sponge: once I discover a particular author or style or genre, it’s part of me forever. 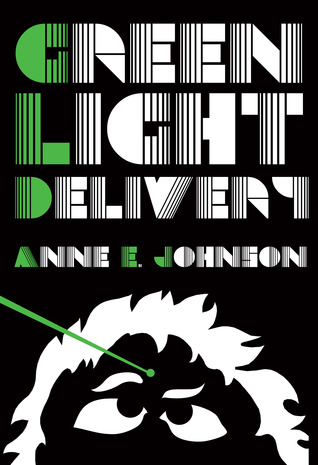 Webrid is a carter, like his mother and grandfather before him. It’s not glamorous work, but it mostly pays the bills, and it gives him time to ogle the sexy women on the streets of Bexilla’s capital. Mostly, he buys and sells small goods and does the occasional transport run for a client.

Then he gets mugged by a robot.

Now, with a strange green laser implanted in his skull and a small fortune deposited in his bank account, Webrid has to make the most difficult delivery of his life. He doesn’t know who his client is, or what he’s carrying, but he knows that a whole lot of very dangerous people are extremely interested in what’s in his head. Literally. And they’ll do whatever it takes to get it.

With the help of some truly alien friends, a simple carter will journey across worlds to deliver his cargo. And hopefully keep his head in the process. 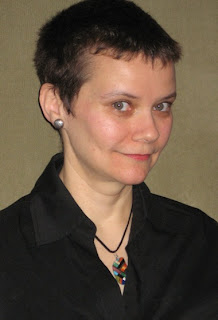 Anne E. Johnson is a fiction writer based in Brooklyn. Her eclectic background includes degrees in classical languages and music history. She has published over twenty short stories, many of them for children. Green Light Delivery is her first science fiction novel and her first novel for adults. You can learn more at her website, http://anneejohnson.com.