Published:
Please welcome Chris F. Holm to The Qwillery again. Earlier this year Chris blogged and was interviewed as part of the 2012 Debut Author Challenge. Chris' second novel in The Collector series, The Wrong Goodbye, was published on September 25th in the US and Canada. 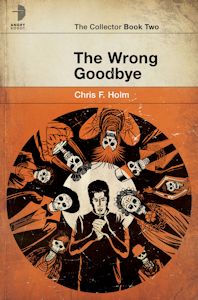 Chris:  Thanks so much for having me!


TQ:  What do you wish you'd known when the 1st book, Dead Harvest, came out that you know now?

Chris:  Truthfully, my publishing schedule's been so compressed, what with THE WRONG GOODBYE following DEAD HARVEST by a mere seven months, I'm not sure I'm a whole lot wiser than I was when my first book came out. What I am, I think, is considerably more disciplined, and maybe thicker-skinned.

I confess, the two months surrounding DEAD HARVEST's release, I was so distracted I didn't get much writing done. A good review would leave me flying high. The rare lousy one would lay me low for days. And the myriad guest posts, interviews, and podcasts became my focus -- my sole book-work -- rather than playing a support role to the writing itself.

Now, though, I have no such luxury. My deadline for book three, THE BIG REAP, is early next year, so I can't very well squander any writing time between now and then. I've had to learn to adapt. To write no matter what. And as a consequence, I've developed even more respect for those writers who make this roller-coaster appear effortless, and keep putting out good work year in and year out.


TQ:  Please tell us something about The Wrong Goodbye (The Collector 2) that is not in the book description.

Chris:  THE WRONG GOODBYE finds Sam diving down the rabbit-hole of the demon drug trade. And tangling with a giant, pissed-off bug-monster. And picking up an accidental sidekick who happens to be an undead Vegas mobster who, as it turns out, is dating a kickass blind transgendered fortune-teller. If I've done my job, it's a bigger, scarier, funnier novel than its predecessor, one that answers several questions left dangling at the end of DEAD HARVEST, as well as introducing a few more along the way.


TQ:  Which character has surprised you the most in the series so far?

Chris:  At risk of tipping my hand for stories yet to come, I'd have to say Lilith. Her character and motivations are so much more complex -- and more nuanced -- than I initially gave her credit for. The Lilith of myth, which is essentially the Lilith I'm writing, is the archetype for the femme fatale of classic crime pulp. You know, the kind of sexy, redheaded seductress that lays some bogus sob story on world-weary PI in an attempt to play him for her own gain. Only the more time I spend with her, the more I realize she didn't wind up that way of her own accord. She's been dealt a pretty lousy hand, and she's playing it for all it's worth. That makes her far more sympathetic of a character than I anticipated. And now that I have a sense of how that hand plays out, I'm damn excited to write it.


TQ:  In a nutshell what is supernatural noir or urban fantasy noir? Are they the same thing?

Chris:  Noir, to me, is more flavor than genre. And though definitions for noir are a dime a dozen, here's my short-and-sweet: noir is nothing more or less than bleak humanism. I'm talking shit options, bad decisions, and dire consequences. And it seems to me that flavor plays as well in the realm of the fantastic as it does with crime fiction.

As for the difference between supernatural noir and urban fantasy noir, my series has been called both, and that suits me just fine. For most folks, the terms are interchangeable. My only stumbling block is with the "urban" part, because I don't think it's an essential ingredient to the stories I'm telling. Much of THE WRONG GOODBYE takes place in the desert wilds of the American Southwest, or the Amazon rainforest. Very little of it happens in cities. But "urban fantasy" has become a catch-all term for fantasy that takes place in our modern world as opposed to, say, Tolkienian high fantasy, so it makes for a handy enough shorthand nonetheless -- my silly nitpicks aside.


TQ:  Are there any other genres in which you would like to write?

Chris:  Oh, heck yes. In fact, not too long ago, I finished a straight-up crime novel about a hitman who makes his living killing other hitmen. I've got a small-town-mystery-slash-ghost-story sitting on my shelf as well. I've been noodling a high-concept science-nerd thriller in the vein of Michael Crichton for years now. I'd love to write a comedic caper one of these days. And I'd be surprised if I never write a horror novel.

Chris:  Right now, I'm working on book three in the Collector series, THE BIG REAP. It should be out sometime next year. And after that, who knows? I'm a lousy judge of where this crazy writing-ride is taking me.

Chris:  As ever, it's been a pleasure. 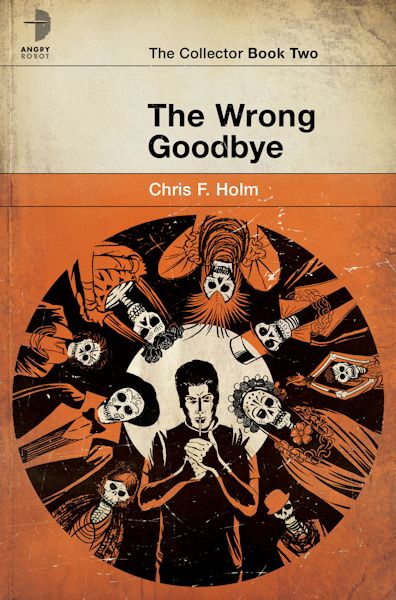 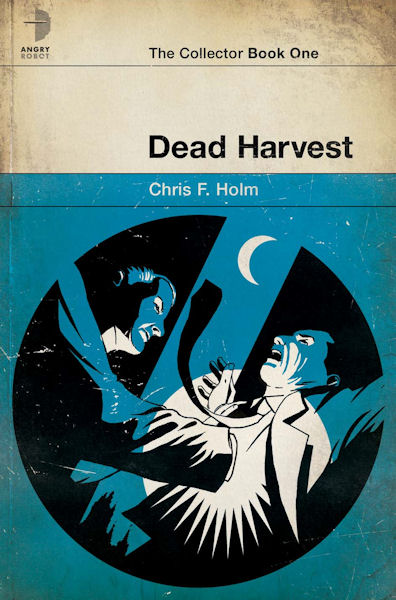 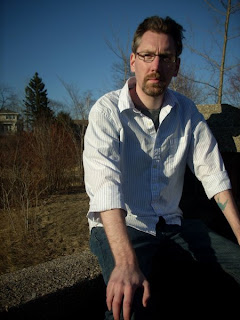 Chris F. Holm was born in Syracuse, New York, the grandson of a cop with a penchant for crime fiction. He wrote his first story at the age of six. It got him sent to the principal’s office. Since then, his work has fared better, appearing in such publications as Ellery Queen’s Mystery Magazine, Alfred Hitchcock’s Mystery Magazine, Needle Magazine, Beat to a Pulp, and Thuglit.

He’s been a Derringer Award finalist and a Spinetingler Award winner, and he’s also written a novel or two. He lives on the coast of Maine with his lovely wife and a noisy, noisy cat.

What:  One commenter will win a copy of The Wrong Goodbye (The Collector 2) from The Qwillery.

Have you read any supernatural noir or any noir novels? If yes, name one.
If not, what is one of your favorite Urban Fantasy novels?
Please remember - if you don't answer the question your entry will not be counted.

Who and When:  The contest is open to all humans on the planet earth with a mailing address. Contest ends at 11:59pm US Eastern Time on Wednesday, October 3, 2012. Void where prohibited by law. No purchase necessary. You must be 18 years old or older to enter.

11 Comments on The Qwillery: Interview with Chris F. Holm and Giveaway - September 26, 2012