Published:
Please welcome Kelley Grant to The Qwillery as part of the 2015 Debut Author Challenge Interviews. Desert Rising will be published on April 21st by Harper Voyager Impulse in digital format and on May 26th in print. 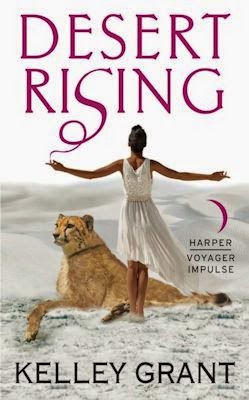 TQ:  Welcome to The Qwillery. What inspired you to write Desert Rising? What appealed to you about writing secondary-world fantasy?

Kelley:  I love the possibility and potential of new worlds. Anything can be, anything can happen. I love creating new cultures and myths the cultures live by. I know Tolkien loved languages – but I’m into the myths of a world and what it says about the history and culture of the people who live with those myths. My love of Greek mythology inspired the deities of Desert Rising, and allowed me to create my own mythological base to the great Temple, which is home to the giant temple felines who choose pledges.

TQ:  What sort of research did you do for Desert Rising?

Kelley:  I researched caste systems – how and why they came into being. I also brushed up on Greek mythology to help my deities become larger than life. And I studied trade routes and caravans of the Syrian Desert in pre-modern times to get a feel for what a merchant would need to caravan through a desert climate.

Kelley:  The Crone, who is the voice of the deity Ivanha for some reason was easiest, even though I don’t like anything Ivanha stands for. Perhaps because the Crone is wisely wicked and contemptuous of others and it can be fun to write such a tone. My second viewpoint character of Kadar was difficult because he is relatively ordinary and tends to be overshadowed by his more flamboyant twin sister, Sulis.

TQ:  Which question about Desert Rising do you wish someone would ask? Ask it and answer it!


Kelley:  Who was the great Temple feline, Djinn, based on? Djinn’s alter ego was Chester, a beloved little gray housecat with the heart of a great feli. Anyone who visited my home was stalked, observed, judged, and either selected or rejected by Chester. Those he selected were never forgotten by him. Those he judged unworthy, tended to bleed if they dared to approach him. Most of Djinn’s mannerisms come from Chester’s unique way of showing his love and ownership of me. He passed away at age 19 a few years ago, but through Desert Rising, his legend lives on.

TQ:  Give us one or two of your favorite non-spoilery lines from Desert Rising.

Incense filled the air, and Djinn gave a giant sneeze, spraying Sulis. Unlike the other feli, who remained sitting tall, just barely touching their paired, he sprawled beside her and laid his big head in the lap she created with her crossed legs. When she didn’t immediately stroke him behind the ears, he reached out a long leg and touched her knee with his paw, claws barely sheathed. She sighed in irritation and caressed him, so he wouldn’t put a hole in her shift. His answering purr filled the meditation area, and the other pledges looked over at them in surprise. Lasha met her eyes, and Sulis rolled hers. Lasha looked away, hiding a smile.

This is a wonderfully busy time! I’ll be in Chicago at C2E2 on an epic fantasy panel the end of April. Then Desert Rising’s sequel, The Obsidian Temple, will be released in July. In between you can find me teaching yoga classes, writing the third book of the series and editing other finished novels.

Kelley:  Thank-you for having me! The Qwillery is my favorite source for new novels and it is an honor to be interviewed by you. 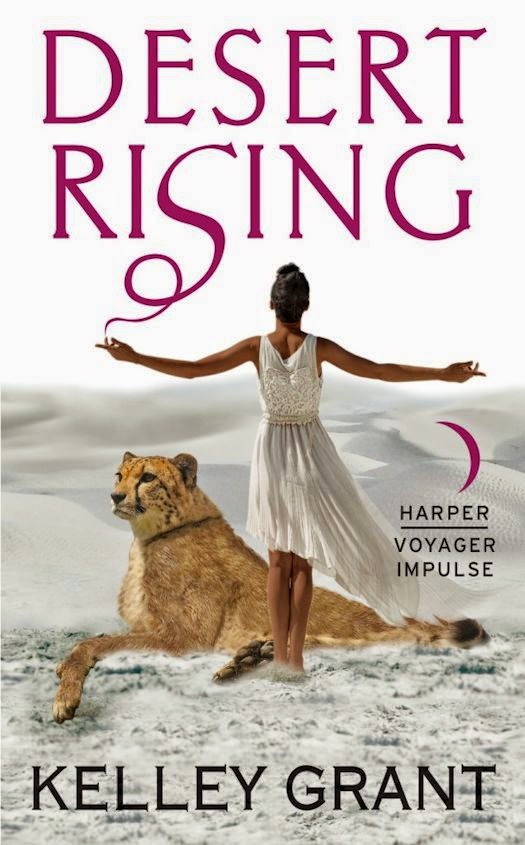 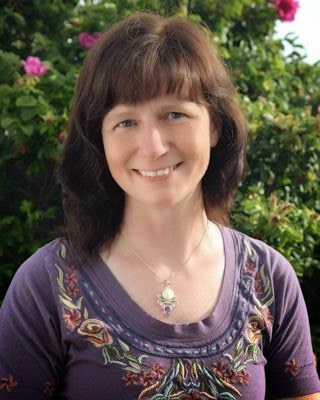 Kelley Grant grew up in the hills of Ohio’s Amish country. Her best friends were the books she read, stories she created and the forest and fields that inspired her. She first told stories to her cats, then other kids, then expanded her audience to professors at Otterbein college, where she got her degree in writing. She and her husband live on a wooded hilltop and are owned by five cats, a dog and numerous uninvited critters. Besides writing, Kelley teaches yoga and meditation, sings kirtan with her husband, and designs brochures and media.