Haunted Warrior – Behind The Opening Scene
Firstly, I must apologize to Sally for overlooking her email with the original date for my guest appearance at The Qwillery. I was delighted when she asked me to visit and then somehow didn’t see her email with the date.

I’m blaming the Deadline Dragon as he’s been breathing fire down my neck in recent weeks.

So I’m very pleased to be here today.

I’m hoping a bit of background info on Haunted Warrior will make up for my gaffe.

The most interesting tidbit about Haunted Warrior is that the opening scene is real. It happened to me exactly as described in the book, with only a few elaborations to make the experience suitable for a romance novel.

Balmedie Beach really exists and is quite storied. Legends abound about the beach and rightly so, as the seas there are rough and many ships have been lost off this stretch of rugged coastline.

As I have a fondness for wild places, Balmedie is a favorite walking spot for me on my trips to Scotland.

The beach is gorgeous with red sand and high, grass-covered dunes. One afternoon when I was walking there, I spotted a kilted man standing on the dunes. All kilted men look good, obviously. But this man was more. He had the air of a guardian about him. That word leapt into my mind when I saw him. Perhaps it was his proud stance, as if he owned the empty strand and its long line of dunes. Or maybe it was the way he was looking out to sea, almost as if it was his duty to watch over those waters. He also struck me as not quite of this world or time, even though he was perfectly solid and not ghostly in any way.

Whoever he was, he was striking. It was a cold autumn day and wind tossed his hair and tugged at his kilt. No one else was around and the solitude worked as an attractive backdrop for him.

I tried to watch him unobtrusively.

I also wanted a picture of him. So I snapped away, pretending to aim at the beautiful seascape. I took three photos. The first two show him as I saw him, standing on the dunes and staring out to sea.

When I took the third photo, something weird happened.

He vanished before my eyes.

The third photo shows a large ball of light where he’d been standing.

Stunned, I ran up the dunes to see if he’d nipped down the other side, disappearing from view. But he wasn’t anywhere to be seen. Nothing but empty moor grass stretched in all directions. There also wasn’t a road anywhere near, so he couldn’t have zipped away in a car.

He was simply gone.

I think he was a ghost. I can’t imagine any other explanation.

Sadly, I’ll never know for sure.

Either way, the incident sparked Haunted Warrior. Everything the heroine, Kendra Chase, experiences in the book’s opening scene is exactly how it happened. The only difference is that, when I continued my walk, I didn’t have a second meeting with the kilted man as Kendra does in the story. That part is pure fiction. But I sure had fun letting Kendra run into him.

And I loved giving him a name and personality as the hero of Haunted Warrior. I made him Graeme MacGrath, who lives in a fishing village on Scotland’s rugged North Sea coast. He’s a guardian, indeed. Protective of his home and also an ancient secret that could destroy everything he loves.

His heroine, Kendra Chase, is an American spirit negotiator. A ghost whisperer, if you will. She can see and speak with the dead. Her job is to soothe disgruntled spirits, usually souls who are angered about disturbances to places they love, such as restoration projects.

It is such an assignment that takes Kendra to Graeme’s village, a special place that’s being refurbished into a living history site. The local ghosts aren’t amused and it falls to Kendra to appease them.

Unfortunately, other forces are stirring in the village. Their menace is the reason, among others, that Graeme isn’t pleased when Kendra appears on the scene.

Of course, as Haunted Warrior is a romance, they soon find themselves fighting their attraction for each other as well as facing down a very powerful – and, at times, charismatic – enemy.

Here’s a mini-excerpt showing their first meeting. (the book’s opening scene as discussed above)

Set-up: Kendra is walking a deserted Scottish beach when she sees a sexy kilted man atop the dunes. She continues on and a short while later, she sees him again. But he’s down on the strand now. And he’s no longer kilted but wearing jeans and a black leather jacket…

Kendra and Graeme’s Meeting on the Beach…
He was the man from the dunes.
And he was coming right up to her, his strides long and easy, his dark gaze locked on hers.
“This is no’ place for a woman to walk alone.” His voice held all the deep, richness of Scotland. “The seas here are aye heavy, the surf rough-”
“Who are you?” Kendra didn’t miss that his dark, good looks were even more stunning up close. “Didn’t I just see you on the dunes?”
“You’re an American.” A corner of his mouth lifted as he avoided her question. His sexy Scottish burr deepened, as if he knew the rich, buttery tones would make her pulse leap. “A tourist come to visit bonnie Scotland?”
“Yes.” Kendra’s chin came up. Hunky or not, he didn’t need to know her business here.
She was interested in his. Only Superman could change clothes so quickly.
“Weren’t you in a kilt a while ago?” She kept her chin raised.
“A kilt?” His smile spread, a dimple flashing in his cheek. He held out his arms, glanced down at his jeans. “I do have one, aye. But as you see, I’m no’ wearing it now.”
“You did have one on. A kilt, I mean.”
“You’re mistaken, lass.” He lowered his arms, fixing her with the same intent gaze as he’d done from the dunes.
“I saw you.”
“You could’ve seen anyone. That’s why I’ll tell you again, this is no’ place for a bonnie lassie-”
“I’m not a lassie.”
“Nae?” He gave her a look that made her entire body heat.
“I’m an American.” The excuse sounded ridiculous. “We don’t have lassies.”
“Then beautiful women.” He touched her face, tucking a strand of hair behind her ear.
Kendra’s pulse beat harder. “There are lots of gorgeous women in the States. Smart women who-”
“Those other women aren’t here and dinnae matter.” He stepped back, studying her appreciatively. “I meant you.”

***
Kendra and Graeme were fun to write. And my inspiration came from more than a mysterious kilted man on an empty Scottish beach.

Kendra’s character was inspired by my own fascination with ghosts. I spent years ghost hunting in the UK with two like-minded friends, exploring as many haunted sites as possible. We had lots of ghostly adventures, witnessing enough paranormal activity to make me a believer. My experiences on those ghost hunting trips helped me write Kendra.

There are other bits and pieces of ‘me’ that inspired the story. My great love of animals, especially dogs. My appreciation of cozy, atmospheric inns and pubs. My love-hate relationship with left-driving in the UK. And always, my passion for wild places and cold, blustery weather.

A book is a blend of the writer’s heart, mind, and life experiences. The trick is weaving it all together to breathe life into the story. When everything comes together as it should, magic happens…

And a book is born.

Thank you, Sally, for inviting me to The Qwillery to share my inspiration for Haunted Warrior. I’ll give away a signed copy of the book to one commenter. And I’ll post anywhere in the world, so international readers are welcome.

Readers can visit me at my website: www.welfonder.com
Or at my blog, Tartan Ink: http://tartaninkblog.wordpress.com/ 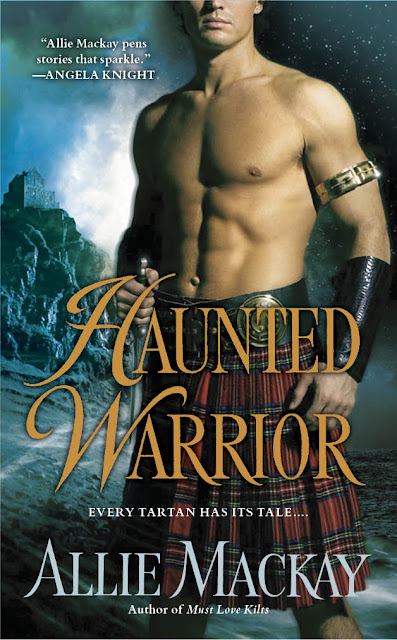 WHEN DANGER RISES, PASSION IGNITES….
Kendra Chase earns her living as a ghost whisperer. Her work is often emotionally draining, so she’s been looking forward to a vacation in Edinburgh. But it turns into a working holiday when an assignment sends her to Scotland’s rugged north coast. The tiny fishing village of Pennard is being excavated for a historical restoration project, and the locals aren’t the only ones upset by the plans: Supernatural uprisings have been reported.

No one knows better than Graeme MacGrath that his village is a hotbed for psychic trouble. Bound by a centuries-old legacy, Graeme is the fiercest opponent to the development project. The renovation work has disrupted the protective veil between this world and darker, more ancient ones. And though he doesn’t have time for dallying with a fetching American, desire –and love– flares between them. Soon Graeme will depend on Kendra for more than her paranormal abilities as they work to save Pennard from the brink of unspeakable evil. 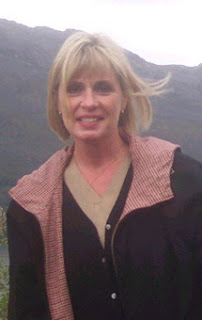 Allie Mackay is the pen name for Sue-Ellen Welfonder who writes Scottish medieval romance under her real name. A former flight attendant, she has three grand passions: Scotland, the paranormal, and dogs. All can be found in her medieval romances and the paranormals she writes as Allie Mackay. She’s proud of her Scottish descent, spent fifteen years in Europe, and now just tries to live quietly although she never misses a chance to visit Scotland. She’s devoted to her Jack Russell Terrier, is an absolute night owl, and writes at a 450 year old desk that once stood in a Bavarian castle.

What:  One commenter will win a signed copy of Haunted Warrior from Allie Mackay!

Kilts or jeans? Which should your Highlander be wearing?
Please remember - if you don't answer the question your entry will not be counted.

Who and When:  The contest is open to all humans on the planet earth with a mailing address. Contest ends at 11:59pm US Eastern Time on Thursday, January 26, 2012. Void where prohibited by law. No purchase necessary. You must be 18 years old or older to enter.

56 Comments on The Qwillery: Guest Blog by Allie Mackay - Haunted Warrior – Behind The Opening Scene