Published:
Please welcome C.A. Higgins to The Qwillery as part of the 2015 Debut Author Challenge Interviews. Lightless is published on September 29th by Del Rey. CAH:  I’ve written, in some form or another, for as long as I can remember, but in college I started to write more seriously. Writing to complete something, rather than just for the fun of it, gave me a sense of purpose that I found (and still find) very satisfying.

CAH:  I am such a plotter that friends who are also plotters look at me sideways and say, “Calm down with those outlines, Higgins.”

CAH:  The time I have in which to do it—or lack thereof. I work during the week, and if I tried to write after I got home from work, I would end up exhausted. So I write one day out of the weekend, all day, and I defend my time on that day ferociously. If I didn’t, I wouldn’t get anything done.

CAH:  I love the 19th century. Dostoevsky is my favorite—the part of THE IDIOT that stretches from about the argument between Aglaia and Nastasya to the end of the novel is the most perfect hundred and fifty pages I’ve ever read. I am also a huge fan of Robin Hobb’s Farseer books.

CAH:  “The capture of a criminal on a spaceship has consequences that throw the ship, its crew, and their government into chaos.”

TQ:  Tell us something about Lightless that is not found in the book description.

CAH:  The book jacket mentions Althea and Ivan, but there is another major character named Ida Stays. Ida is an interrogator, and as much an outsider to the Ananke as Ivan is. Ivan has information that she needs, and there’s very little she wouldn’t be willing to do to get it—including things that might put the Ananke at risk.

TQ:  What inspired you to write Lightless? Is Lightless hard SF, Space Opera? Genre-wise how would you describe it?

CAH:  Lightless is a space opera and a thriller. I was inspired to write it in a physics class where we were learning about thermodynamics. We were doing an exercise where we determined the equation of state of particles in a box and I, rather fancifully, imagined those particles as people. A group of people in an isolated container aren’t that much different from an ideal gas—put pressure on them, and things heat up. As for what “box” I would put the characters in, I envisioned this strange spaceship that has a very close relationship with the concept of entropy—and that became the Ananke.

TQ:  What sort of research did you do for Lightless?

CAH:  I was in college for physics at the time, which was pretty helpful for a science fiction novel, especially since I was concentrating in astronomy! I did take an elective on robotic motion to get a better sense of how the computer of the Ananke would relate to its physical surroundings (and struggled with the class—I am no Althea Bastet). Otherwise, I did a bit of research on some varied psychological topics that related to the characters in the novel. And one very memorable and somewhat traumatizing research session was focused on learning about how bodies decay in different environments, which has surely, surely put me on an FBI watch-list somewhere.

CAH:  Ivan was the easiest. I feel the closest connection to him, as troubling as that statement is, and so it was always easy to slip into his skin. Plus, he is the character who incites most of the action. Whenever I wrote a scene with Ivan in it, it never lacked for conflict.

The hardest character was Constance Harper. Like all the characters connected with Ivan’s past, certain truths about her had to be obscured—or at least, there had to be the appearance of obscurity—but Constance always wanted to be very clear and open and bold about herself and her character. Mattie, Milla, and Abigail all have more shadowy personas, but Constance is very inflexible.

TQ:  Which question about Lightless do you wish someone would ask? Ask it and answer it!

CAH:  “How did your characters get their names?” I had fun naming them. For the crew of the Ananke: Ananke is the Greek goddess of compulsion. Althea’s name means “healing”, but she was also the mother of Meleager. Domitian is the name of a Roman emperor, and yet it translates to “tamed”. Ida is named after Mount Ida, the birthplace of Zeus. Gagnon means “guard dog”.

TQ:  Give us one or two of your favorite non-spoilery lines from Lightless.

CAH:  There’s a character in the novel who speaks more poetically than the other characters do, and I’m very fond of a lot of her language. Unfortunately, everything she says is very spoilery! My favorite non-spoilery lines would have to be:

“She stood silently, ethereal wind stirring the wavelengths of her invented hair, the sightless eyes of the hologram watching Althea without a word.”

““How exciting,” he said, in a tone that contended with the sun side of Mercury for aridity.”

CAH:  LIGHTLESS will have two sequels. The next one, called SUPERNOVA, picks up where things left off in the first book and follows some of the characters as they deal with the effects of the events in LIGHTLESS. It’s got a lot of action, and it was a very exciting book to write.

CAH:  Thank you for having me! 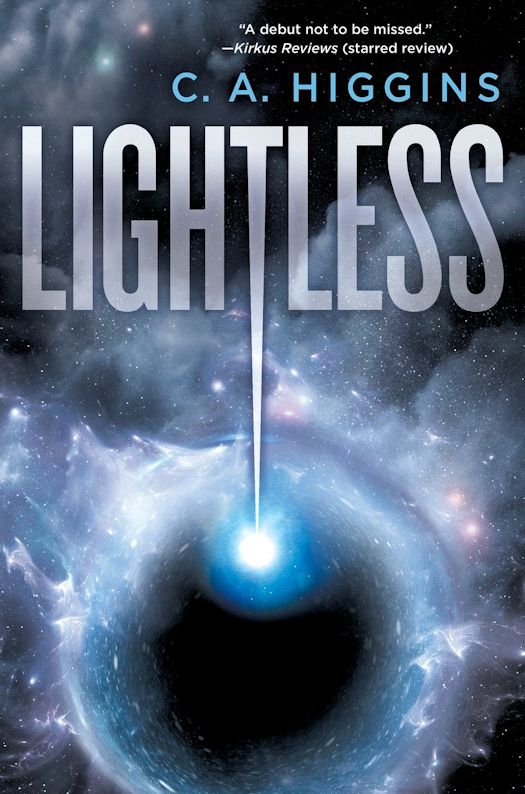 With deeply moving human drama, nail-biting suspense—and bold speculation informed by a degree in physics—C. A. Higgins spins a riveting science fiction debut guaranteed to catapult readers beyond their expectations.

Serving aboard the Ananke, an experimental military spacecraft launched by the ruthless organization that rules Earth and its solar system, computer scientist Althea has established an intense emotional bond—not with any of her crewmates, but with the ship’s electronic systems, which speak more deeply to her analytical mind than human feelings do. But when a pair of fugitive terrorists gain access to the Ananke, Althea must draw upon her heart and soul for the strength to defend her beloved ship.

While one of the saboteurs remains at large somewhere on board, his captured partner—the enigmatic Ivan—may prove to be more dangerous. The perversely fascinating criminal whose silver tongue is his most effective weapon has long evaded the authorities’ most relentless surveillance—and kept the truth about his methods and motives well hidden.

As the ship’s systems begin to malfunction and the claustrophobic atmosphere is increasingly poisoned by distrust and suspicion, it falls to Althea to penetrate the prisoner’s layers of intrigue and deception before all is lost. But when the true nature of Ivan’s mission is exposed, it will change Althea forever—if it doesn’t kill her first.

C.A. HIGGINS or Caitlin Higgins, is a debut author who writes novels and short stories. She was a runner up in the 2013 Dell Magazines Award for Undergraduate Excellence in Science Fiction and Fantasy Writing and has a B. A. in physics from Cornell University. Lightless is her first novel, written during her time as an undergrad at Cornell.