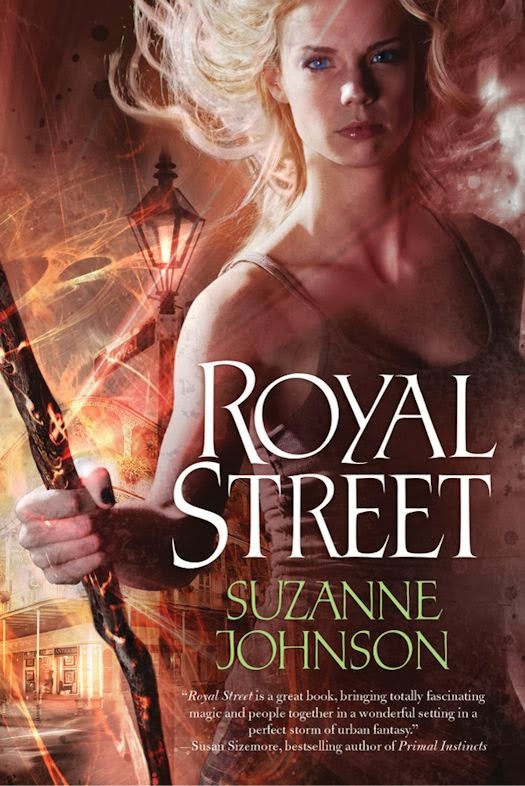 As the junior wizard sentinel for New Orleans, Drusilla Jaco’s job involves a lot more potion-mixing and pixie-retrieval than sniffing out supernatural bad guys like rogue vampires and lethal were-creatures. DJ's boss and mentor, Gerald St. Simon, is the wizard tasked with protecting the city from anyone or anything that might slip over from the preternatural beyond.

While winds howled and Lake Pontchartrain surged, the borders between the modern city and the Otherworld crumbled. Now, the undead and the restless are roaming the Big Easy, and a serial killer with ties to voodoo is murdering the soldiers sent to help the city recover.

To make it worse, Gerry has gone missing, the wizards’ Elders have assigned a grenade-toting assassin as DJ’s new partner, and undead pirate Jean Lafitte wants to make her walk his plank. The search for Gerry and for the serial killer turns personal when DJ learns the hard way that loyalty requires sacrifice, allies come from the unlikeliest places, and duty mixed with love creates one bitter gumbo.

Royal Street is set in the historic city of New Orleans just before and during Hurricane Katrina. DJ is a 'sentinel' whose job it is to protect the city from ghosts and demons from 'the beyond'. DJ packs herself off to her grandmother's in Florida to wait out the storm when she gets a call from the wizard Elders to return to the city to hunt for her mentor and substitute father Gerald. Unable to contact Gerald by either technological or magical means has DJ extremely worried as he is a powerful wizard who should be able to protect himself. Returning to New Orleans following the hurricane makes the search for Gerald even more of a challenge with the wide spread devastation caused by the storm. The wizard Elders force DJ to team up with the enforcer Alex as the threat of more incursions of ghosts from the 'Otherworld' into New Orleans makes the city even more dangerous. Just to make her search even more difficult DJ has the centuries old pirate Jean Lafitte, straight from the Otherworld, hot on her tail and looking for revenge. Everything seems to be conspiring against DJ and her quest to find her lost mentor. Time is running out before Hurricane Katrina isn't the only thing that leaves New Orleans devastated.

I have wanted to read Royal Street for a long time and I wasn't disappointed. I thought it was a great start to the series. New Orleans makes for the perfect setting to deliver Johnson's plot with its colourful history in both witchcraft and voodoo. Hurricane Katrina is an excellent plot device to deliver her story as it creates its own challenges for DJ and the mechanism for weakening the barrier between New Orleans and the 'otherworld'. Johnson is spoiled for choice for baddies and she picks several excellent antagonists for this tale. However, DJ felt a little under developed as a character and there were a couple of times I felt like reaching inside the story and giving her a good slap. DJ always seemed to do the opposite of whatever she was told to do. I was almost surprised that she given so much responsibility when she acted with so little of it at times.  I am confident that this character will grow and mature as the series continues, or at least that I am hoping that is the case. I am looking forward to continuing with the Sentinels of New Orleans series to see what else is in store for DJ and how Johnson portrays the re-building of New Orleans.
Source: qwillery.blogspot.com
+ Sharelabels (8)Flag
AllBook ReviewsMelanieRoyal StreetSentinels of New OrleansSuzanne JohnsonTor BooksUrban Fantasyreview

3 Comments on The Qwillery: Review: Royal Street by Suzanne Johnson