Published:
Please welcome Jillian Stone to The Qwillery as part of the 2012 Debut Author Challenge interviews. The Seduction of Phaeton Black (Phaeton Black, Paranormal Investigator 1) was published on March 27, 2012.

Jillian:   I'd have to say it's my compulsive use of OED's historical thesaurus. I find some of the best words in there. I was looking up alternate words for condom the other day (first use 1706) and found these: rubber goods and rubber johnny. Aren't they brilliant? And they even have a British period feel.

TQ:  Who are some of your favorite writers?

Jillian:   I do quite a bit of plotting. I start with sticky notes on my computer desk top, then I write a five to eight page synopsis which I let percolate for awhile. I do a lot of tweaking to the synopsis adding plot twists, analyzing where the plot drags––maybe add some plot drivers. At some point I begin writing! But very importantly I leave room for the characters to bring something new to the story, and they always do!

Jillian:   Learning to write to a tight schedule continues to stress me out. There never seems to be enough time. I love to write, then let things percolate, then I go back in and enrich the character's dialogue, or add some world building. So many authors I know don't sweat the deadlines much. They can write with no sleep for a week. I get too goofy without sleep––even worse I write gibberish!

TQ:  Describe The Seduction of Phaeton Black in 140 characters or less.

Jillian:   Phaeton Black is dedicated libertine who lives in a flat below a brothel and uses absinthe and opium to dull the jabberwocky in his head. He consults with Scotland Yard on strange and unusual cases.

TQ:  What inspired you to write The Seduction of Phaeton Black?

Jillian:   My original thought was to write a Sherlock Holmes hero who appears to be a debauched libertine and substance abuser, but as the story develops the reader comes to know and understand the real man.

TQ:  What sort of research did you do for The Seduction of Phaeton Black?

Jillian:   Phaeton was harder than America Jones, because he has the biggest character arc. He needed to risk his heart and grow, but at the same time I wanted to hold onto his edgy lust for life––the thing that makes Phaeton, Phaeton. One of the easiest characters to write was Julian Ping, a hermaphrodite transexual crime solver with unusual abilities.

TQ:  Without giving anything away, what is/are your favorite scene(s) in The Seduction of Phaeton Black?

Jillian:   Phaeton gives America Jones a temporary job and roof over her head. Being a dedicated bachelor, it is fun to see how they work it out.

Jillian:   The Moonstone and Miss Jones is the second novel in the series. Phaeton is shanghaied in Shanghai and America chases him all the way back to London. They both become involved in struggle to save London from a number of beasts, terrors––and power grabbers.

I am giving away two copies of The Seduction of Phaeton Black to two commenters. Canada and International commenters welcome! My question to commenters: Do you have a favorite occult detective? Here are a few characters for you to consider: Hellboy, Agents Mulder and Scully from X-Files, Constantine, Buffy the Vampire Slayer, Harry Angel in Angel Heart.

Jillian:   Thank you for having me, Sally! 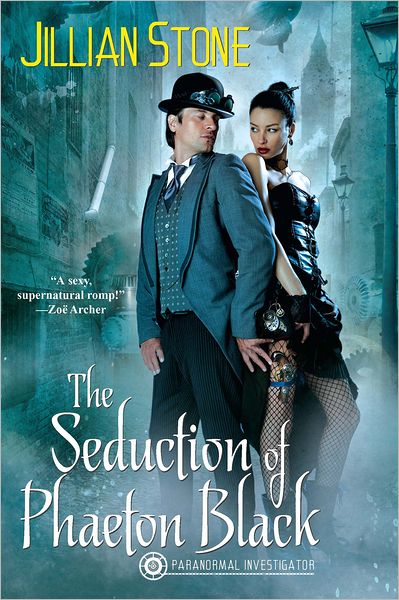 In the gaslit streets of Victorian London, phantoms rule the night, demons dance till dawn, and one supernatural detective dares to be seduced by the greatest power of all…

He’s The Man With The Magic Touch

A master of deduction, seduction and other midnight maneuvers, Phaeton Black is Scotland Yard’s secret weapon against things that go bump in the night. His prodigious gifts as a paranormal investigator are as legendary as his skills as a lover, his weakness for wicked women as notorious as his affection for absinthe. But when he’s asked to hunt down a fanged femme fatale who drains her victims of blood, he walks right into the arms of the most dangerous woman he’s ever known…

Pressing a knife to his throat—and demanding he make love to her—Miss America Jones uses Phaeton as a willing shield against the gang of pirates chasing her. As deadly as she is, with a derringer tucked in her garter, Miss Jones is not the vampiric killer he’s been staking out—but she may be just what Phaeton needs to crack the case. As the daughter of a Cajun witch, she possesses uncanny powers. As a fearless fighter, she can handle anything from Egyptian mummies to Jack the Ripper. But when an ancient evil is unleashed on the world, she could be his only salvation…or ultimate sacrifice. 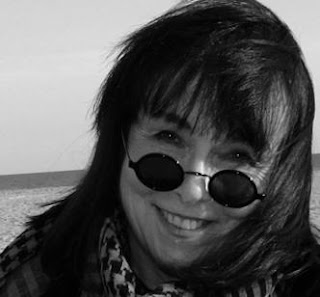 In 2010 Jillian Stone's Victorian Romantic Suspense novel AN AFFAIR WITH MR. KENNEDY won the Golden Heart and sold to Pocket Books. Her sexy, supernatural Steampunk novel, THE SEDUCTION OF PHAETON BLACK, won the 2010 Romance Through The Ages Erotica category and sold to Kensington Brava. Jillian lives in California and is currently working on the next adventures for both series.

What:  Two commenters will win a copy of The Seduction of Phaeton Black from Jillian.

Do you have a favorite occult detective?

Here are a few characters for you to consider: Hellboy, Agents Mulder and Scully from X-Files, Constantine, Buffy the Vampire Slayer, Harry Angel in Angel Heart.

Who and When:  The contest is open to all humans on the planet earth with a mailing address. Contest ends at 11:59pm US Eastern Time on Tuesday, April 10, 2012. Void where prohibited by law. No purchase necessary. You must be 18 years old or older to enter.

55 Comments on The Qwillery: Interview with Jillian Stone and Giveaway - April 3, 2012